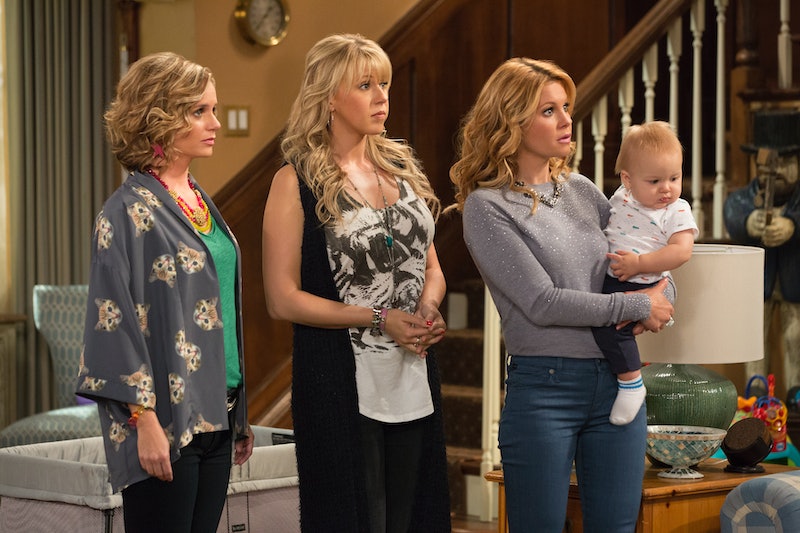 Get ready for some major feels. While Netflix may have already released the teaser trailer for the Full House reboot, Fuller House, the continuation of the classic '90s show still hasn't exactly hit me. It's been all talk (literally; the teaser consisted of people talking through a door while a cute dog hung out on-screen) but no real footage. We've had the stars of the show discussing the project with press. We've seen what the San Francisco home we know and love looks like today. We've even seen pictures from set. But we haven't seen the characters in action. So it all hasn't totally sunk in yet. That is, until now. Netflix just released the first photos from Fuller House. Seeing them, I'm immediately brought back in time and into the magic of the Tanner household once again.

However, these new photos aren't just full of nostalgia. They're also bringing up a ton of new questions. In fact, some of the most noteworthy things we can take from the production stills include D.J. holding a baby (Is it hers? What's its name?), the girls going out to party (Are they all single? Who will D.J. date next?), and a ton of new kids' faces (Who are these tiny people?). I'm anxious to match the faces with the names. There is a whole lot of catching up to do, folks. Seriously, just take a look for yourself.

This Adorable Trio (And Baby!)

Stephanie, Kimmy, and D.J. are at it again.

Who Are All These Tiny People???

I mean, I'm sure the show will explain, but I want to know now!

Forget about remaining calm at this point. Full House fans, you have until Feb. 26 to pull yourselves together. Your Netflix-watching experience is about to get super nostalgic.