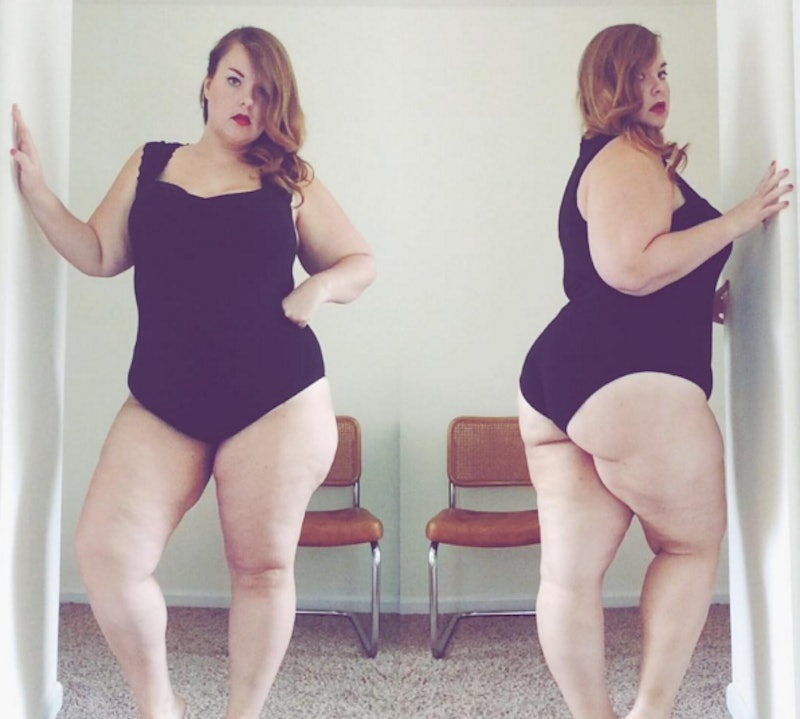 There's a growing video trend that provides a totally new twist on body positivity that we didn't even realize we needed. Don't Hate The Shake was started by Master's student Melissa Gibson last January through a simple Instagram video on her own page. By shaking her body on screen and captioning it with #donthatetheshake, Gibson started a trend. A trend that has almost 1,000 tagged posts on Instagram and now their own Insta account, Don't Hate The Shake, which has accumulated over 5,000 followers and is constantly reposting a diverse selection of body positive babes taking part in the campaign.

The project is one that's liberating for all kinds of women. When we pose in photos and static images, there's a solidity to the weight of our bodies that isn't always the reality of fat bodies. Because really, fat bodies are soft, pliable, and extremely prone to shaking, moving, wibbling, and wobbling. Removing the stigma from the natural movement of our bodies as we skip, jump, and dance through life is one that can help many larger people live their lives more comfortably. Remember Dancing Man from last year? We need to normalize and appreciate the way big bodies move, in order to stop the bullying that happens as often as it does.

For Gibson, body positivity is invaluable to living life to the fullest. When I spoke to her, she described the entire movement with precision and passion, "Body positivity is about seeing beauty in diversity. It's not about widening the standard of beauty that we currently have and that the media perpetuates, it's about dismantling the standard all together." She goes on to tell me, "We are natural beings and we are created to look different from one another. Body positivity celebrates those differences in a world where the media and advertising try to sell us that we all have to look a certain way to be considered beautiful or worse yet, valuable."

Gibson's honest dedication to body positivity is refreshing — there's nothing manufactured or ill-motivated about her contributions to the movement. Her campaign is one that keeps on giving and the reactions continue to surprise her. "It started off with just a few other ladies deciding to post a video of their own and it kept growing. I love watch the joy on peoples' faces. It's a huge step and I don't think anyone has regretted it. "

Gibson continues: "For me, it's just something I'm excited to be a part of and it's really shocking for some people that we are not just celebrating our bodies in pictures, but also celebrating our bodies in motion. It's wonderful to see so many women that I admire and who have inspired me choose to be a part of this. Simply, it's a movement of people who are going against the norms of society, having fun, and who are not ashamed to share the product of that online. Every video puts a smile on my face, I don't think I am alone in that." She should be proud of the work she's done for fat acceptance.

Fat bodies deserve to be celebrated just as much as thin bodies, and as much as plus size lingerie photo shoots and hashtags may do to help the movement, they don't quite encapsulate life as a fat person as well as these videos have. The movement of a larger body is in no way inferior to that of a smaller body — there's beauty to be found in both.

More like this
TikTok's "Would I Look Good With Short Hair?" Hack Is Genius
By Olivia Rose Ferreiro
Twitter Has So Many Thoughts About ‘Don’t Worry Darling’ After Its Release
By Stephanie Topacio Long
Angel Number 111 Is All About Manifesting Your Power
By Brittany Beringer and Nina Kahn
6 Dating App Tips To Try If You're Looking For A Serious Relationship
By Lexi Inks
Get Even More From Bustle — Sign Up For The Newsletter