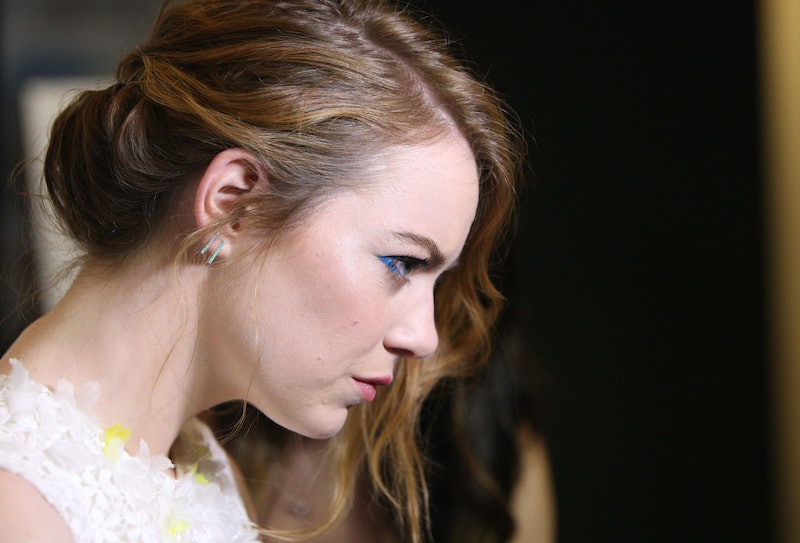 Disney is all about live-action takes of their classic animations these days. With Emma Watson set to play Belle in Beauty and the Beast and Jungle Book headed to theaters later this year, they are on a roll. But the latest Disney live-action movie to catch our attention has to be the reboot of 101 Dalmatians in the form of a prequel film titled Cruella . Where Emma Stone is in talks to play Cruella de Vil, the famous villain whose journey the prequel film will follow throughout all of that time before she came across tons of adorable puppies and wanted to wear them. I know; It's amazing.

However, it's more than just an amazing idea. Obviously, seeing the Amazing Spider-Man actress wrapped in a Dalmatian fur coat and surrounded by puppies is pretty cool. But what makes it even better is the fact that she's proved to us time and time again that she can totally pull this off. With her rebellious attitude in Birdman, her classic look in Gangster Squad, her undeniable comedy streak in Easy A, and her performance as Sally Bowles in Cabaret on Broadway, she's got every tool in the toolbox sharpened for the role. At this point, even listing anyone else for the part would be a complete waste of time. Need proof? Well, here it is.

It can't get any better than this.

2. She's Got The Body Language Down

Cruella de Vil has a very particular way about her. And it's safe to say that Emma can handle the physical transformation.

3. She Can Get Straight-Up Feisty Sometimes

I think we know by now that a short temper is definitely something Emma can do!

Seriously, things can get pretty serious when you try to deal with Cruella. And Emma has totally got this.

4. Her Look Of Pure Disgust Is Perfect.

It's like they're clones of one another. These puppies are in for a rude awakening!

The resemblance is uncanny. Are we 100 percent sure that Emma isn't actually Cruella? (You know, without the hatred for dogs.)

Watch out, Glenn Close! It looks like Emma may be taking over your iconic role.