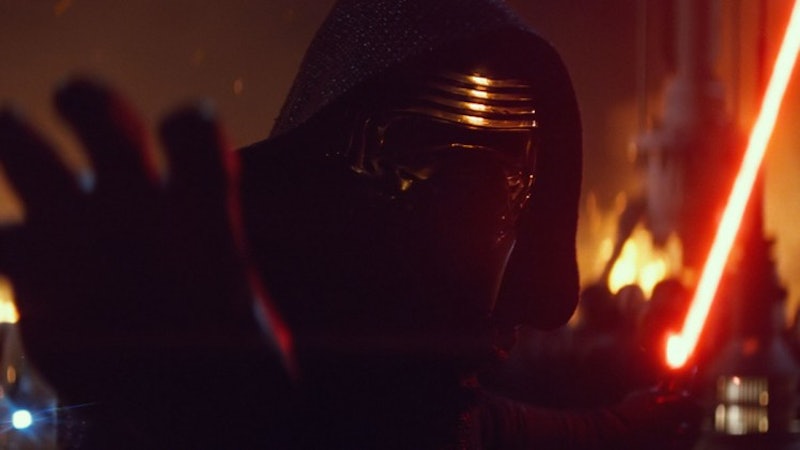 Before the newest Star Wars movie debuted last month, there were a number of theories being tossed about relating to the identities of the new characters. And now that everyone has seen the movie... there are still a bunch of theories going around about The Force Awakens . Although it's true the movie didn't tell us everything there is to know about the new characters (and it shouldn't have since it's the beginning of a trilogy), it still revealed a decent amount. But not everyone is taking what the film revealed as fact. And one of the crazier theories making the rounds suggests that Kylo Ren is not Han & Leia's son.

You may be wondering why some fans would think that Kylo Ren is not the offspring of Han Solo and Leia Organa, since it's spelled out very clearly in the movie. First when Snoke makes the revelation to the audience by way of his telling Kylo Ren something about, "Your father, Han Solo," and then again when Han and Leia themselves have an extremely expository conversation filling in the backstory of Kylo Ren being their son, his turning to the Dark Side, and stating how it drove them apart. So why, after all this, do some people still think the movie is trying to pull the wool over their eyes when it comes to Kylo Ren's parents?

Twitter is full of alternate theories, with several fans still clinging to the belief that Kylo can't possibly be Han's son, positing that his father is instead Luke Skywalker, Severus Snape, or... Ray Romano.

Clearly, the basic thinking behind the idea is that Adam Driver, who plays Kylo Ren, doesn't look much like his on-screen dad Harrison Ford. And since Disney could have cast anyone in the role, why would they choose the tall, lean, black-haired Driver, whose face has a very unique and distinctive look, over someone who could more easily pass for Han and Leia's kid?

The most vocal of these dissidents are of the "Luke is Kylo Ren's real father" camp. This is largely due to Kylo Ren's real name being Ben. In the Star Wars Expanded Universe, Luke had a son named Ben, and these theorists use this as proof that Kylo isn't who The Force Awakens says he is. But there's a major hole in their theory: The Expanded Universe no longer counts as canon. Before the new movie came out, Disney basically said that nothing in the Expanded Universe actually happened, basically relegating it to the status of glorified fan fiction. So what does this mean for Kylo Ren's parentage?

It means his parents are Han and Leia. Look, the reason Disney cast Adam Driver is because they felt he was the best actor for the role, and I think they made the right call. He did a tremendous job. And it doesn't matter if he doesn't look exactly like Harrison Ford; kids don't always look like their parents. It happens. And more importantly, if Han Solo isn't Kylo Ren's father, then the lovable rogue's death was for nothing.

Think about it. Ben Solo turning to the Dark Side is what drove apart one of cinema's greatest couples, Han and Leia. And Han's death at the hands of Kylo served as the turning point in character development for both the villain, Kylo Ren, and the protagonist, Rey. So if it's later revealed that Kylo Ren isn't really Han Solo's kid, then Han's life with Leia was ruined for no reason, and his life was ended for no reason. And do you really see the franchise doing their most-loved character that kind of disservice? I don't think so.

More like this
10 Eurovision Moments That Celebrate The Weird & Wonderful Camp Extravaganza
By Sam Ramsden
'Selling Sunset’s Amanza Has Been In A Secret Relationship For Two Years
By Rachel Mantock
Elizabeth Olsen's Chris Evans Friendship Update Was Accidentally Hilarious
By Grace Wehniainen
Wait, Did Wanda Die In 'Doctor Strange And The Multiverse Of Madness'?
By Arya Roshanian
Get Even More From Bustle — Sign Up For The Newsletter