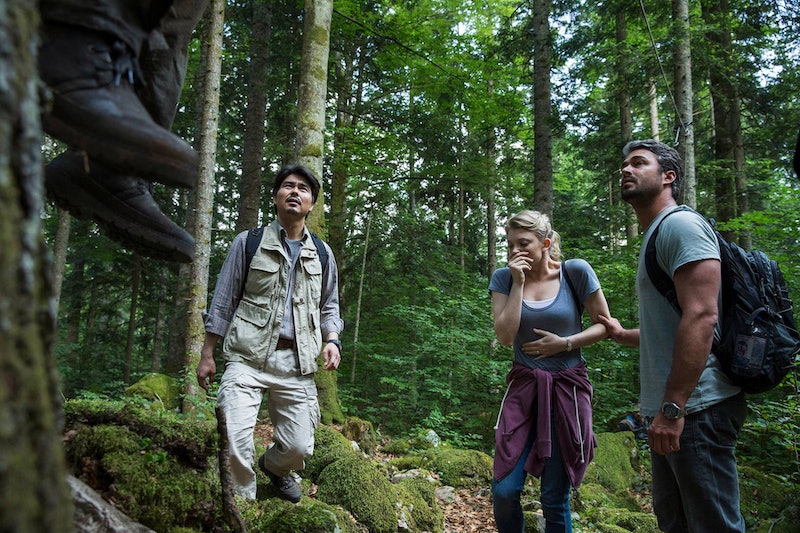 Game of Thrones fans are used to the occasional horror. A beloved character's head being severed from his body? A pregnant woman being stabbed to death? That's Game of Thrones on a good day. So, no matter how scary The Forest, GoT star Natalie Dormer's new film is, there's really almost nothing that could scare Thrones viewers enough to keep them away from the theater. That said, there are no swords here, no dragons and no Starks. In The Forest, Dormer plays Sara, a young woman whose twin sister goes missing after entering Japan's Aokigahara Forest, known around the world as The Suicide Forest. Sara travels to Japan to search for her sister, and, if the trailer is anything to go by, is haunted by the spirits of those that have taken their lives in the forest. Scary stuff, for sure, but just how intense are we talking?

Well, if you're a scaredy cat like me, The Forest is pretty darn scary. I mean, as a twin sister, I'm all for a story of a woman going to great, and supernatural, lengths to save her sister, but I am also very easily frightened. In early clips released for the film, Dormer is seen being chased by the dead and suffering hallucinations. One particularly disturbing clip shows Dormer attempting to extract maggots from under her skin.

For director Jason Zada, The Forest is less about visual scares and more about psychological horror. As Zada explained in an interview with Fangoria, he approached The Forest "as a performance-driven film that is all the scarier because these supernatural forces are attacking characters you actually care about." Whether or not he succeeded is another story. Not many reviews of The Forest were released prior to the film's Jan. 8 release date, and those that were released were less than complimentary. Chicago Tribune critic Michael Phillips described the film as "roughly 40 minutes of story surrounded by 45 more minutes of Dormer in nonverbal distress." So, maybe The Forest won't terrify horror-movie lovers who have already seen all the tropes and jump scares of the genre.

One thing that has perhaps scared audiences — not in a good way — when it comes to The Forest is the subject matter. The Suicide Forest is a real place in Japan. The dense forest sits at the base of Mount Fuji, and is believed to be the second mos popular place to commit suicide in the world. Needless to say, the number of people who have killed themselves in the forest is large, and continues to climb. And while horror films have a right to be inspired by whatever subject matter they please, some potential audiences have been turned off by the idea of using suicide as Hollywood fodder, especially when mental health is rarely taken seriously in movies (or in some cases, society). Furthermore, others question the decision to cast two white leads — Dormer and Taylor Kinney — in a film that revolves around a famous Japanese forest and Japanese culture. As noted by The Mary Sue's Charline Jao, "The Forest is part of a long tradition of narratives that play off of the foreign as exotic, exciting, dangerous, and scary. These stories are, at best inaccurate and juvenile, and at worst, highly offensive and racist."