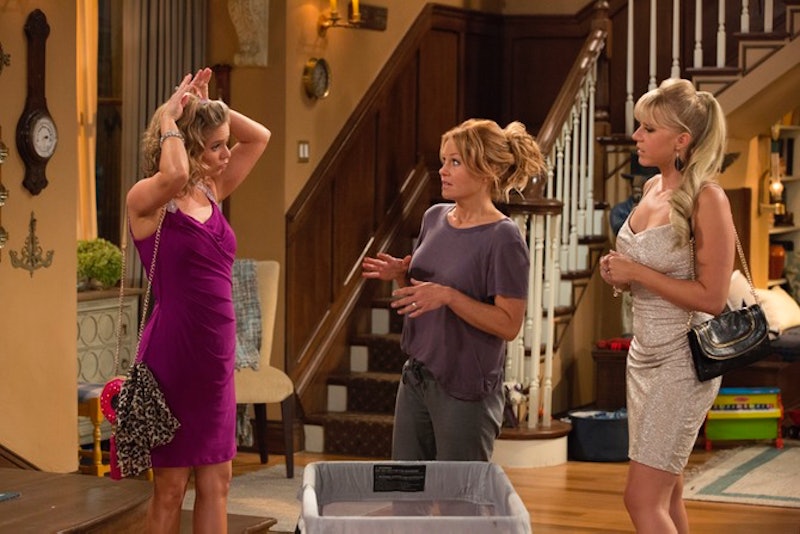 Every day, we get closer and closer to Fuller House 's Netflix debut, and no doubt you've been zipping through your favorite Full House episodes in mental preparation. Well, prepare yourself for a mild to moderate heart attack: The first promo photos for Fuller House have hit the Internet, showcasing that not only the Tanner sisters (and Kimmy) are adults now, but that house has changed ever-so-slightly for the better. In fact, as the "full house" was the titular star of the show, why don't we recount everything different about the Fuller House?

Using my expert eye for detail (and Google image search, God bless it), I was able to pinpoint a bunch of subtle interior design differences that have taken place in the full house, based off of the new promo photos... and what has, for some scary reason, stayed the same. Actually, come to think of it, a lot of things have stayed the same, which is good for the nostalgia factor.

Basically, I'm just saying that the girls have only done some gentle Pinteresting, if any, when it came to revamping the house.

Regardless, here, outlined for you, is everything different about the new and improved Fuller House. First, let's take a look at the original house:

And here's the new house:

Since the last time we visited the full house, the walls have changed from a thrilling off-white to a gorgeous beige. Actually, based on the weird names paint chips usually have, it's probably more like, "egg shell" and "cafe au lait." That iconic staircase is still there, though. Verdict is still out if that's the old stair runner, but it's a definite maybe.

Pier One Imports And Clocks Galore

No, seriously, you're going to tell me that the soon-to-be-iconic statement clock behind Kimmy wasn't picked up at a Pier One Imports? Double that for the cute white dresser. Not really sure about the... chia pet or whatever plant that is, though.

Potential Expansion And... What Are They Sitting On?

OK, so it would seem that the weird little book nook is the same, save for the aforementioned paint job. What's particularly interesting, then, is the fact that the living room looks bigger. Perhaps it's a trick of the angle, but I think they smashed down a wall to fit in the insane amount of people that come in and out of this establishment. Loving that new nook and the ultra modern lamp.

My only concern? Uh, I'm pretty sure that looks like the same gingham couch from the literal '90s, which doesn't even fit in with the decor. Also, ew. I can't tell if the rug is new or not, mostly because the full house ran through a few rugs during the series, but the old couch is simply unacceptable.

Definitely No Longer A Girl's Room

So I'm assuming — mostly because the angle doesn't make it totally clear — that this was either Michelle and Stephanie's room or DJ's room at one point. If I were a betting man, I'd say the former. The first notable thing here is that they've thrown out the pencil bed. The second noticeable thing? Uh, there's nothing pink, frilly, or feminine about this room. Those are cars on the walls, guys.

By the way, notice the little Teddy Bear on the shelf? Would this be an homage to Mr. Bear, the stuffed animal that Pam left with Stephanie? Is it a new legacy bear that DJ's husband left with one of her boys? Or nah, it's just a random toy and I'm just looking into it? We'll find out.

If you watch the teaser video, you'll note that the new kitchen is beautiful! Light, airy, with a modern finish over the counter tops, it's the best interior design achievement thus far. They still couldn't quite get rid of the faux-wood panels, but I think the new finish is a lot more appealing.

Overall, the more things change, the more they stay the same. And no matter how the full house looks, I'm sure we're in for a lot of familiar adventures with the Tanner clan.