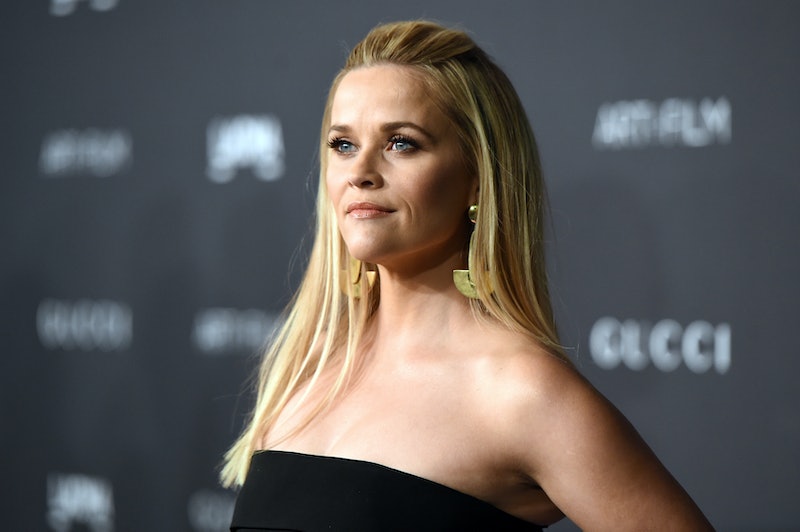 With the 2016 award season looming over us like that creepy moon emoji, it's a given that the red carpet — and I mean every red carpet at every award show — will be just as buzzworthy as this year's nominees. While the whole red carpet experience represents all of the glitz and glamour of celebrity and is an opportunity to talk to the crème de la crème of film, television, and music, it is also seen as a microcosm of sexism in our society. Since the 2014 debut of the #AskHerMore campaign, a revolutionary movement created by the Representation Project to encourage reporters to ask women on the red carpet more than the typical "Who are you wearing?" countless celebrities have championed the cause, including Reese Witherspoon, Lena Dunham, and Shonda Rhimes, to name a few. But has #AskHerMore really changed celebrity culture?

It's an important question, and one with a complex answer. In calling out perceived sexist red carpet reporting, #AskHerMore has created significant awareness of the dichotomy between the questions asked to men and those poised to women.

"This is a movement to say we’re more than just our dresses. There are 44 nominees this year that are women and we are so happy to be here and talk about the work that we’ve done," Reese Witherspoon told Robin Roberts on the red carpet of the 2015 Oscars. "It’s hard being a woman in Hollywood, or any industry."

And it seems that reporters took the campaign seriously, making a concentrated effort to talk more about actress' careers and talent on the carpet as opposed to their fashion and who they're wearing. A roundup of E!'s 2015 Emmys red carpet coverage proves this, noting that while now-former Fashion Police host Giuliana Rancic did discuss fashion and what the stars were wearing (it is her job, after all), all hosts #AskedHerMore, talking with Laverne Cox about the importance of being on a show as diverse as Orange Is the New Black and discussing Claire Danes carrying the entirety of Homeland on her shoulders.

Additionally, take E!'s controversial "mani cam," for example (in which female celebrities literally walk their manicured hands down a mini runway for fingers), was pulled from the network's 2015 Oscars red carpet coverage. A spokesperson for the network claimed that it was due to "space constraints," but it's hard to think it was purely a coincidence that the decision to ditch it came after multiple A-listers, including Jennifer Aniston, flat-out refused to participate. Whether their refusal was a byproduct of the #AskHerMore campaign specifically or more of the general awareness that #AskHerMore has brought upon the culture, it still sets a level of precedence: Female stars aren't putting up with being treated differently from males celebs. And the media is accepting that.

To be honest, the red carpet queries about fashion and which celebrity is wearing what designer will probably never be eliminated. There is the valid argument that is not an inherently sexist question and has more to do with style and the fashion-centric spectacle that is the red carpet. As Maureen O'Connor of NY Mag's The Cut writes:

The #AskHerMore campaign’s fixation on abolishing "Who are you wearing?" as the red carpet’s go-to question is deeply misguided. If ever there were a time and place to obsess about fancy dresses, it is on the red carpet at the Academy Awards. The key to enjoying the Oscars red carpet is accepting that it isn’t actually about filmmaking. The Oscars are the Oscars of movies. The Oscars red carpet is the Oscars of gowns. It’s an hour-long theatrical production about style, and it just happens to share its cast with the nominees and presenters of the Academy Awards.

And while many, many more are in agreement — namely the fashion designers themselves — #AskHerMore has become, well, more than just a rallying cry to ask women about "deeper" topics than fashion. Though the campaign's focus is on red carpet reporting, #AskHerMore has played a significant role in how the media covers female celebrities in general. It has not only brought enormous attention to the issue of sexism in celebrity culture, it also came at a time when the media was already changing its tune about how women are discussed.

Like how society is evolving and progressing, celebrity news coverage is as well. I can't even count how many times in the early 2000s I'd be in the checkout aisle at a grocery store, only to see some sleazy tabloid headline blaring "CELEBRITIES WITH CELLULITE" accompanied by unflattering, long-range lens paparazzi shots of women in bikinis. While this type of coverage still exists, there has been a dynamic shift. Instead of the majority of celeb news outlets calling out female celebs for their purported weight gain (or weight loss), many are applauding and celebrating stars for their various body types, using language that is body positive and empowering. Is this because of the #AskHerMore campaign? No. But #AskHerMore is challenging this same type of coverage. There has already been a shift in how the media covers famous women — but there needs to be more. And #AskHerMore is pushing for more of a change.

And it's obvious that it needs to be addressed. Look at Lauren Conrad, who, when asked what her "favorite position" was by a submitted fan question during a radio spot, answered "CEO." It was an incredibly clever answer to a disgustingly sexist question that sent celebrity news outlets simultaneously praising the reality star for her response and slamming the question for its sexism. Look at Ariana Grande, who schooled radio DJs after they repeatedly asked her sexist questions:

"I have a long list of things I’d like to change... I think, judgement in general. Intolerance, meanness, double standards, misogyny, racism, sexism," the singer said. "You know, all that sh*t. There’s lots we’ve got to get started on. That’s what we need to focus on. We’ve got work to do. We’ll start with you, though."

Though news outlets were quick to applaud both women for their responses, there is still a problem when these are the questions that are being asked. It is why campaigns like #AskHerMore were created in the first place, and why they are more important thane ever. There is much work to be done, and #AskHerMore is determined for it to happen.

And fortunately, it is. Because in addition to the runaway success created by #AskHerMore — look at all of these reporters who upped their line of questioning! — for the second year of #AskHerMore, the Representation Project teamed up with Amy Poehler's Smart Girls Ask, which featured in-depth, celebrity-tweeted red carpet questions being asked to other stars on the red carpet. Not only were celebs championing the cause in their own right, they were now the ones prompting these discussions and asking the questions. It's clear that the campaign, and the movement to bring awareness and acknowledgement of sexism in Hollywood, is growing.

So, has #AskHerMore single-handedly changed celebrity culture? No. But it has played an important role in bringing awareness to the gender gap and sexism in Hollywood. It is a part of a greater shift in how the media covers famous women, and it is pushing for more: More awareness. More action. And, most importantly, more for women. #AskHerMore, indeed.