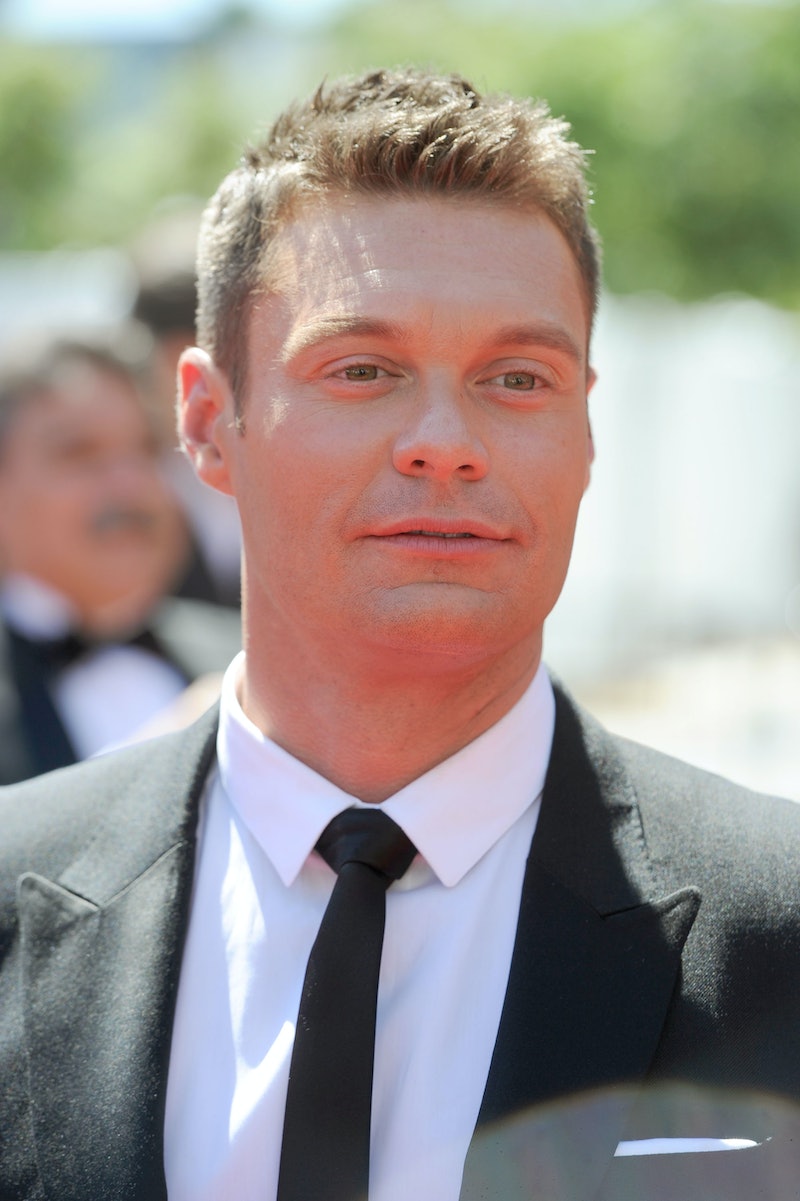 If you tune into red carpet coverage during award show season, then you're accustomed to hosts like Giuliana Rancic and Ryan Seacrest asking nearly all of the female stars who step onto their podium which designers they're wearing. Tonight, however, E!'s Emmy coverage embraced #AskHerMore and shied away from inquiring about dress and accessory designers. Instead, host Ryan Seacrest opted for questions about the stars' careers and talents. There was quite the distinction, however, between the coverage seen between E!'s anchors. While Seacrest chose to shift focus away from the classic, "Who are you wearing?" inquiry, Rancic focused almost completely on the style of the stars. While Seacrest did casually mention — in between queries regarding character arcs and future seasons of series — the fashion of the actresses, his interviews did prove that the #AskHerMore hashtag has impacted red carpet coverage.

In case #AskHerMore didn't quite make it on your feminist radar last year, the movement began when The Representation Project tweeted the hashtag and inspired social media users to participate. Twitter users quickly chimed in with the questions they'd like their favorite female stars to be asked as opposed to the typical request of who they're wearing.

The tag quickly took off when celebrities began to chime in on how they'd begun to see changes in red carpet questioning. Reese Witherspoon and America Ferrera have been advocates for the movement that is slowly but surely bringing attention to the sexism inherent in glossing over female actresses' incredible work. While the score card for #AskHerMore hasn't dramatically improved red carpet coverage, the effects are being felt. So, how exactly did the #AskHerMore movement fare at the Sept. 19 awards? Let's run through some of the highlight interviews.

While being interviewed by Ryan Seacrest, Laverne Cox spoke eloquently regarding the importance of being on such a diverse show. The conversation only moved to Cox's gorgeous gown when she gave a shout-out to Fransisco Costa. Score 1 for #AskHerMore.

Taraji P. Henson's interview with Seacrest definitely focused on the talented actress' incredible, badass character, Cookie Lyon. Henson opened up about her reluctance to audition for the potentially polarizing role. It wasn't until Ross Matthews mentioned that the star was rocking Alexander Wang that the cameras began to showcase the gown with Seacrest asking, "Tell me before you go about your gown."

Tonight, Poehler's red carpet interview was heavily focused on what she missed about Parks and Recreation and whether she enjoys attending or hosting the show more. Poehler was actually never asked about her look during the coverage.

Hendricks's red carpet coverage focused a lot on the end of popular series Mad Men for which she's nominated. The actress even admitted to taking home a few souvenirs from the set — one of which was Joan's pen necklace. Hendricks was only asked about her gown at the very end of the interview! Long live #AskHerMore!

The talented Edie Falco has a string of hit shows under her belt. That's probably why her line of questioning focused on whether it was easier for the star to find or maintain a good show. With works like Nurse Jackie and The Sopranos on her resume, it's clear that she's got no problem with either. The interview did end with an inquiry about her dress, but it was clearly not the leading line of questioning.

Paulson's interview with Rancic marked a beautiful change up for the E! host. Rancic inquired almost exclusively about the previously nominated star's work. Paulson's gown was only an afterthought in this totally #AskHerMore centric interview.

Roberts's interview with Rancic was also in line with the #AskHerMore movement. Rancic explained that she's excited for the upcoming premiere of the actress's new series Scream Queens. The E! host questioned the star about her character's zingers and shooting the show in New Orleans. Rancic simply closed the interview asking about Roberts's gorgeous gown.

I've got to say that Danes's interview was my favorite of the night. Ryan Seacrest asked about Homeland and how the talented lady carries the whole season on her shoulders. Seriously, Seacrest was a total winner for pointing out how incredible Danes is on the show and glossing over her fashion. He only mentioned the actress's Prada gown for its uniqueness at the end of the interview.

Washington's interview with Seacrest definitely started out on a fashion note, but what set this moment apart from the others is that Washington began the style conversation herself. She beat the host to the punch when she flipped the script and asked Seacrest who he was wearing — which was himself in case you missed it. The interview then focused briefly on Washington's beautiful Marc Jacobs dress before quickly turning to her starring gig on Scandal.

Kaling's E! interview was also a breath of #AskHerMorefresh air. Seacrest focused on The Mindy Project's move from cable to Hulu and how the switch has impacted the show's ability to be a bit more racy. The conversation then made a switch to the funny lady's new memoir. There was zero mention of Kaling's bright gown.

During her interview for the red carpet, Bassett was gloriously asked about her work with American Horror Story creator Ryan Murphy. Seacrest questioned the star — from the previous two seasons of the show — what quality of Murphy’s brought the best out in people and what costar Lady Gaga was like as a scene partner. Refreshingly, no mention was made of Bassett’s dress.

Fey's interview was totally on the #AskHerMore train. Seacrest asked the multitalented star about what to expect, her production of the Oscars, and about Saturday Night Live. There was no mention of Fey's gown — only her impressive resume.

More like this
23 Times Meghan Markle Dressed Just Like Princess Diana
By Bustle UK
The Best Plus-Size Looks From The BET Awards
By Dominique Norman
10 Miranda Hobbes’ Looks From 'SATC' That Were Totally Overlooked
By Allie Fasanella
The $6 Drugstore Beauty Product Taraji P. Henson Uses Every Single Day
By Danielle Sinay
Get Even More From Bustle — Sign Up For The Newsletter