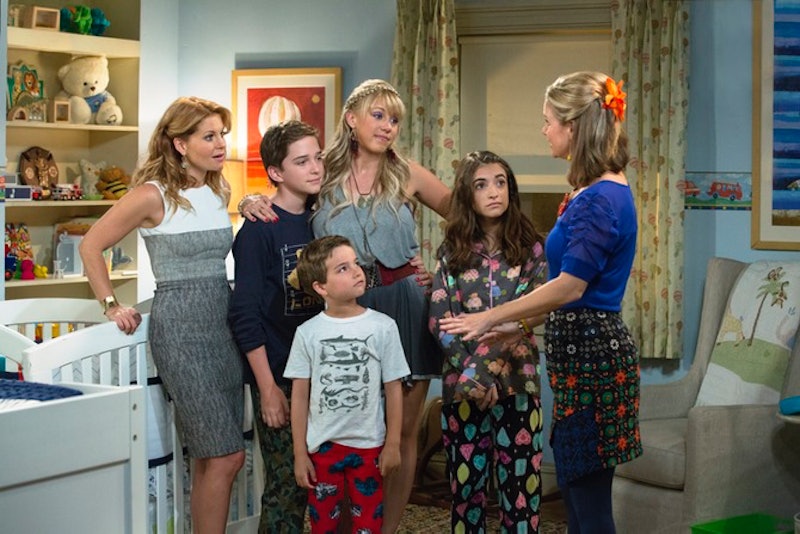 It's official: 2016 will be the year that all of our '90s dreams come true — that is, if your '90s dream is for a brand new Full House spinoff starring D.J., Stephanie, and Kimmy, and featuring your fave father figure trio. New Netflix series Fuller House will begin streaming on Feb. 26, but you don't have to wait very long to get your first glimpse into what the show will look like. Though the show previously released a short Fuller House teaser video, it was just a peek at what was in store for the new series. Now, Netflix has released new images of Fuller House , and they're ready for the diehard fan to analyze from every possible angle. Just how close is this new Tanner house to the one we loved in the '90s, though? The answer is very — down to one the details, and possibly tiny clue that you likely missed.

Fuller House tells the story of what happens when D.J. moves back into her old family home after her husband dies. And, while the San Francisco residence has certainly been renovated since the '90s, some design choices seemed to stick — and I'm not just talking about that plaid couch. Can you spot the clue that connects both series? Here's a photo of the Tanner living room from Full House...

And here's the living room from Fuller House, as shown in the new photos from Netflix:

Notice anything similar, besides the people and overwhelming sense of familial love and pride? It seems that whoever chose to decorate the Tanner house 2.0 was very inspired by the decor from the '90s, which is why they included the same kitschy token.

Near the back window, you'll see that both houses feature a decorative parrot — and there's a very real chance that it's the same one! Though the parrots are facing different directions, if you look closely you will notice that both parrots feature blue wings and a yellow belly. That means one of two things: Either this parrot was a Full House original brought back for the spinoff, or that the set decorator insisted that Fuller House also put a bird on it.

The parrot is just one example of an "Easter egg" tying together the Full House past and present. Now we just have to wait for February to see what other connections we can make.