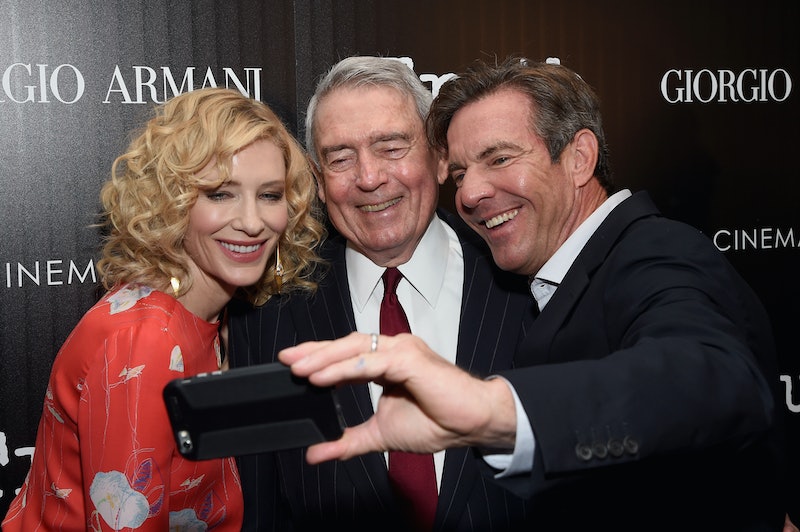 Last year, Cate Blanchett became part of a rarefied group of actors who have won multiple Academy Awards. She was honored with the Best Actress Oscar for her performance in Woody Allen's Blue Jasmine, nearly 10 years after her first win for Best Supporting Actress in The Aviator. (She's also won three Golden Globes and three BAFTAs, so it's not just the Academy that loves her.) In 2014, she faced off against a group that also comprised Amy Adams of American Hustle, Sandra Bullock of Gravity, Judi Dench of Philomena, and eternal nominee Meryl Streep of August: Osage County. It was an impressive group of women, many of whom had won the prize previously and all of whom had been nominated for Best Actress or Best Supporting Actress in the past. And Blanchett is sure to be up for another prize this year for her work in Carol alongside Rooney Mara, leading many fans to wonder how many Oscars Cate Blanchett has won already.

The answer is two. But — as mentioned previously — Blanchett has also been nominated for a few more awards in her day. The Academy is notorious for its reluctance to reward the same actors in consecutive years, which could hurt Blanchett's chances for winning Best Actress so soon after Blue Jasmine. At the same time, though, she had a gap year. She's certainly eligible, and she's widely regarded as the frontrunner by virtue of performance alone. In preparation for her shoe-in nomination, let's look back at her several previous Oscar-nominated roles.

This 1998 film, in which Blanchett plays Queen Elizabeth I, sister of Queen Mary and daughter of Henry VIII, earned her a first Best Actress nomination at the 1999 ceremony. She lost to Gwyneth Paltrow in Shakespeare in Love, which serves as a reminder that Iron Man aside, Paltrow was once a serious contender in awards season.

Blanchett plays the Katharine Hepburn to Leonardo DiCaprio's Howard Hughes in The Aviator, the 2004 biopic that charts Hughes' efforts to make TWA a serious contender in the airline industry and revolutionize air travel. The Aviator was nominated for an additional 10 Academy Awards, including Best Picture and Best Actor, and coming away with five prizes by the end of the night.

Judi Dench co-stars in this drama about a teacher (Blanchett) who has an affair with a student that spirals out of control. It's a hybrid thriller, character study of envy, and personal drama about the lifelong implications of a single indiscretion. Dench was nominated for Best Actress for her role, and Notes on a Scandal received a further two nominations for Best Adapted Screenplay and Best Score.

Todd Haynes and Cate Blanchett could be up for Oscars again this year for Carol, as they were in 2008 for their collaboration on I'm Not There, a Bob Dylan biopic in which various A-list actors depict the famed recluse and folk legend. Blanchett was the only nominee out of the core cast that comprised Heath Ledger, Ben Whishaw, Christian Bale, Richard Gere, and Marcus Carl Franklin.

Blanchett is in the running for yet another award — her lead role in Todd Haynes' Carol puts her in a prime position for Best Actress yet again. But at Sunday night's Golden Globes, Blanchett fell to Brie Larson, who won the Golden Globe for Best Actress, Drama for her role in Room. The Golden Globes certainly aren't a direct feeder for the Oscars, but Larson's win makes her a strong contender against tried-and-true Oscar favorite Blanchett when the nominations come out.