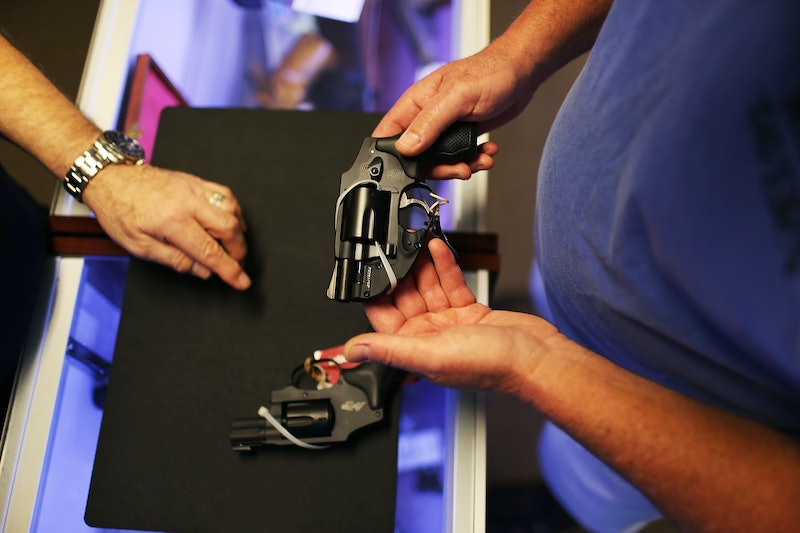 Obama’s face was wan as he entered the East Room of the White House on Tuesday. Leaning over the podium, the president laid out the numbers as he presented a plan for gun control: 30,000 Americans die each year from gun violence, with America leading the world in per capita gun ownership and accounting for about one-third of the world’s mass shootings. Quoting Martin Luther King Jr., Obama cited the “urgency of now” and announced that he is, once again, taking executive action to request federal reform of gun laws.

Obama has tried to introduce reform of American gun laws more than once in the past, but the contentious issue usually dissolves into gridlock. Obama's last major attempt at gun control reform, presented as a response to the Sandy Hook Shooting, was struck down by the Senate in 2013. At the time, The New York Times predicted “only outside circumstances, like another mass shooting, might cause those who voted 'no' to reconsider their positions.”

Tragically, there have been plenty of such circumstances in the years since — America has seen over 1,000 mass shootings since Sandy Hook. While many of these incidents fail to make national headlines, those that do trigger a cycle of collective shock and grief, followed by a flurry of debate on how to prevent future assaults. In recent years, the public discourse has invariably turned to questions of mental health — often with journalists and “armchair psychologists” speculating on which specific mental health issue drove the shooter to his crime. Commentators across the political spectrum tout the need for “better mental health care” as part of any gun control agenda, implying a direct link between mental illness and incidents of mass violence.

On Tuesday, this theorizing went on step further, as Obama included expanded mental health care as one of the goals of his proposed reforms.

It is significant that, this time, the president has asked for increased funding for care in addition to expanded data sharing about those deemed mentally ill. However, the discourse on a whole remains reductive. Not only does the conflation of “mentally ill” and “violent” perpetuate unfair stigma towards the millions of Americans dealing with mental illness, it also serves to forestall important discussion on curbing gun violence.

What Are The Facts On Mental Illness And Violence?

The vast majority of data about mental health and violence shows that people suffering from mental illness are no more violent than people who don't suffer from mental illness — only about 5 percent of violent crimes are linked to serious mental health disorders. Many of the most common mental disorders, such as anxiety, depression, and attention deficit disorders, have no documented connection to increased violence whatsoever, and research consistently shows that past violent behavior and substance abuse are far better indicators of a person’s likelihood of committing homicide than a specific mental health diagnosis.

On the other hand, about half of all U.S. deaths by suicide involve guns. In fact, mental illness is more often linked with increased odds of becoming a victim of violence — for example, a person with schizophrenia may be five times more likely to be the victim of a violent crime than the perpetrator.

The popular image of gun violence perpetrated by a “crazy loner” obscures other important realities that should be part of the gun control discussion, too — like the fact that most gun violence (85 percent, in fact) takes place not between random strangers but within social networks. Current discourse also overlooks the fact that gun violence is much higher in states with higher gun ownership, or that gun violence disproportionately affects communities of color and lower-income populations.

While it’s true that some perpetrators of mass shootings have been diagnosed with mental illness, and that many of these horrific homicides were coupled with suicides, experts say that mass shootings — when taken as part of the much larger picture of gun violence — are such relatively rare occurrences that it is nearly impossible to draw any useful conclusions about patterns or predictability.

Even so, blaming the mentally ill for violence seems to be a frequent point of consensus in the gun control debate, unfortunately. According to a 2013 Gallup poll, 49 percent of Republicans, 51 percent of Democrats, and 45 percent of independents felt that "failure of the mental health system to identify individuals who are a danger to others" was the most pressing factor to blame for mass shootings in the United States, ahead of access to guns or insufficient security at public buildings.

On one level, it is understandable why many people's first instinct is to consider issues of mental health as we struggle to discuss something as senseless as mass shootings. Framing these attacks as manifestations of “insanity” reflects the incomprehensibility of the horrific crimes. When confronted with images of murdered children and stories of wanton killing, everyday language fails, and and many of us seek relief in the alienating labels of “crazy,” “unstable,” or “sick.”

But as easy as these patterns of thinking might be to fall into, they generally do a great disservice both to those struggling with their mental health and those whose safety is at risk. Can these discussions possibly prevent future violence or improve the condition of the nearly 50 million Americans dealing with mental health disorders?

The federal government's relationship to mental health care is a mixed one. The term “mental health” first appeared in the legislative lexicon in the 1940s, with the advent of the National Mental Health Act. This legislation established the National Institute of Mental Health and represented the first-ever federal funding for psychiatric research. Nearly two decades later, the first federal funds were allocated to support patient care through the Community Mental Health Act of 1963. Further studies, commissioned by Jimmy Carter in the 1970s, led to incremental expansion of public mental health care in the 1980s.

Government discussion of the links between gun violence and mental health can be traced back as far as the 1960s with the Gun Control Act of 1968, a bill that prevents those deemed mentally ill from purchasing guns. The relationship between gun violence and mental health received some research attention in the 1980s, but it was the 1999 mass shooting at Columbine High School that brought the debate into the mainstream light. In the decades since, it has become standard practice for policymakers on both sides of the aisle to cite mental illness as an indicator of violence.

Despite the frequent, even bipartisan, call to address mental illness in relation to gun violence, little has actually been done to improve care for those struggling with mental health issues in the United States. Meanwhile, this line of thinking has served to lead many to perceive the vastly non-violent majority of America’s mentally ill as future suspects. The focus on mental health in gun control discussions may at times even serve as a decoy for those wishing to avoid the more compelling connection between gun ownership and violence.

Can Any Of This Actually Help Improve Mental Health Care In The United States?

So, is there anything to be gained from the current discourse around mental health care in relation to gun control?

Arguably, yes — if Obama’s proposed funding is passed, the money would contribute toward the vast need for expanded mental health care. With this prospect, mental health caregivers and advocates face a familiar dilemma: Each time the discussion of mental illness is raised, there are hopes that it will bring increased resources for treatment. However, when politicians claim to be concerned about mental health without delivering actual benefits to those in need, their political scapegoating only reinforces unfair stereotypes and further marginalizes the mentally ill.

Brien Kelley, Ph.D, former staff psychologist at NYU and now a private psychotherapist, told Bustle that he feels torn about Obama’s new proposals. While he agrees that more funding for mental health would be a positive outcome, he fears that the politicization of the issue “increases stigma against a group not more likely to be violent than the general population in most circumstances.” Likewise, many mental health care experts have faulted both sides of the debate for their “misguided” generalizations about mental disorders.

It is difficult to say what the outcome of this current cycle of discussion will bring, particularly during an election season when sensational, clumsy rhetoric so often wins the day. Still, for the thousands affected by gun violence, and the millions dealing with the challenges of mental illness, there at least remains hope for sensible — and compassionate — reform.