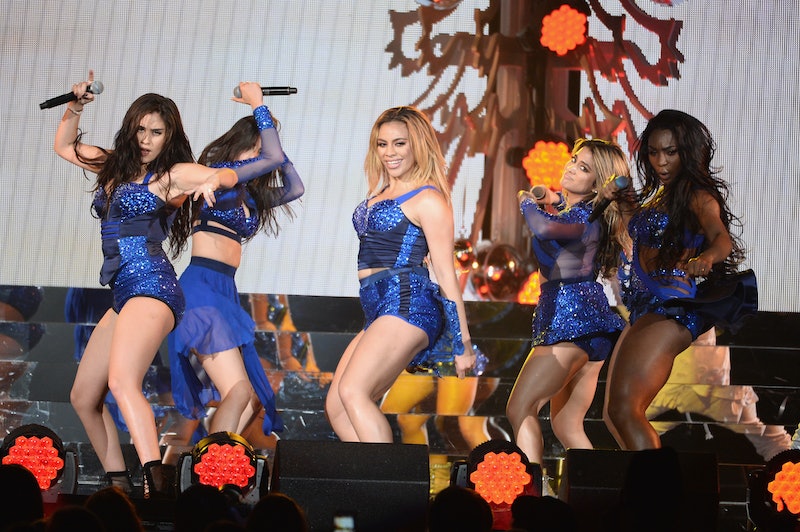 At just 18 years old, Fifth Harmony's Camila Cabello is still relatively new on the music scene — but she knows how to hype an album like a pro. For example, at the beginning of December 2015, the "I Know What You Did Last Summer" singer whipped fans into a frenzy when she announced that Fifth Harmony's new album (aka 5H2) was almost complete, and that the world would be hearing fresh material from the quintet "pretty soon." Then, shortly after Fifth Harmony won Best Group at the 2016 People's Choice Awards this past Wednesday, Cabello cranked up the excitement levels once again when she hinted that the band's sophomore LP is just around the corner. "omg 5H WON BEST GROUP OF THE YEAR!!!! thank u so much u guys for voting," she tweeted. "also we have a present for u. 5H2 coming very sooooon."

How soon is "very sooooon"? Well, she used five O's, so I have to assume she's super serious! Though we still don't know exactly when Fifth Harmony's hotly anticipated new project is dropping, it is starting to feel like something big is on the horizon. For example, after Cabello made her tweet heard 'round the world on Wednesday evening, two rumored Fifth Harmony demos called "Make Love Commandments" and "Cinderella" unexpectedly hit the Web. Now, did the group actually record these two songs? Or were they just submitted for consideration? Are they even legit? At this point, it's unclear. Hopefully we'll find out more info... soon! But wait, there's more...

A Twitter account that supposedly belongs to the parents of Fifth Harmony member Ally Brooke Hernandez has been teasing 5H2's release date recently:

Neither account is verified, so it's probably best to take the above tweets with a grain of salt... but it's still kinda exciting, right? Finally, after both Hernandez and Jauregui were photographed arriving at Los Angeles International Airport on Thursday and Friday respectively, rumors began to spread online that all five group members are meeting up in Los Angeles this weekend for something album-related.

Suspicious, indeed. Stay alert, Harmonizers! It's beginning to feel as though 5H2 could arrive at any moment. Are you ready?