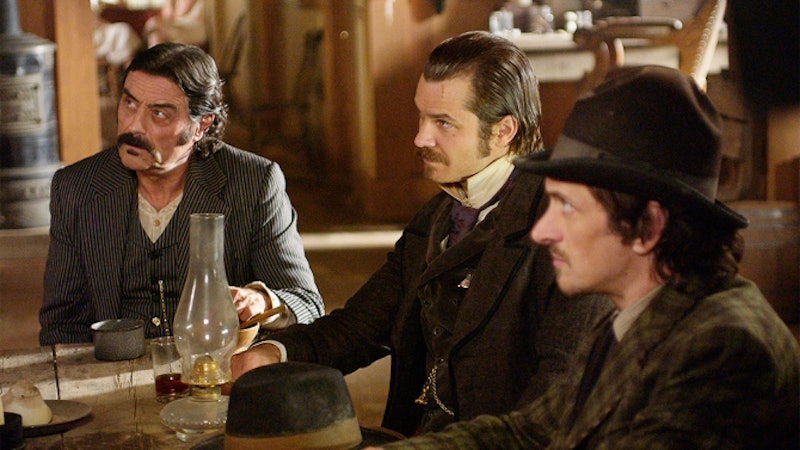 Every once in a while, HBO decides to resurrect one of its TV shows in case the story feels a little bit unfinished (or there's money to be made). The ending of Entourage set itself up for an inevitable film, and Sex and The City proved (twice) that "too much of a good pair of Manolos" is a definite truth. But a film for Deadwood has been anticipated for years now due to its abrupt ending with little development... until now. HBO's programming president Michael Lombardo confirmed that a Deadwood movie is happening, and people are understandably freaking out.

In case Deadwood got lost in the catacombs of old HBO shows (even The Sopranos seems like it was on air centuries ago at this point, the Western focused on the lawless town of Deadwood and was famed for its inordinate amount of profanity. And we're talking "inordinate" by HBO standards, not compared to your average TV show. Regardless, in the series' three seasons Deadwood managed to pick up a total of eight Emmys (mostly for make-up but also for directorial efforts). I mean, it's not television, it's HBO, so the series was mourned deeply when it was unceremoniously cancelled in 2006.

In conclusion, Deadwood's revival is nothing short of a Big Deal, but don't take my word for it. The Twitterverse has showcased plenty of fan feels about this upcoming reunion.

Naturally, The Skeptics Come Out To Play

But Most People Are Overcome With Emotion

Some Can Handle All The Good News The Day Brought In

Many Are Praising At The Altar Of The HBO Gods

While Others Take It As A Reward For Previous HBO Crimes

Overall There's Plenty Of Swearing And Whooping With Joy

And Rejoicing All Across Of The Internet

Most Are Grateful For Deadwood's Second Life

Though it's unclear when exactly the movie will come to fruition, one thing's for damn sure: there's no doubt that people are looking forward to a happy return Deadwood, and all the closure that'll come with it.