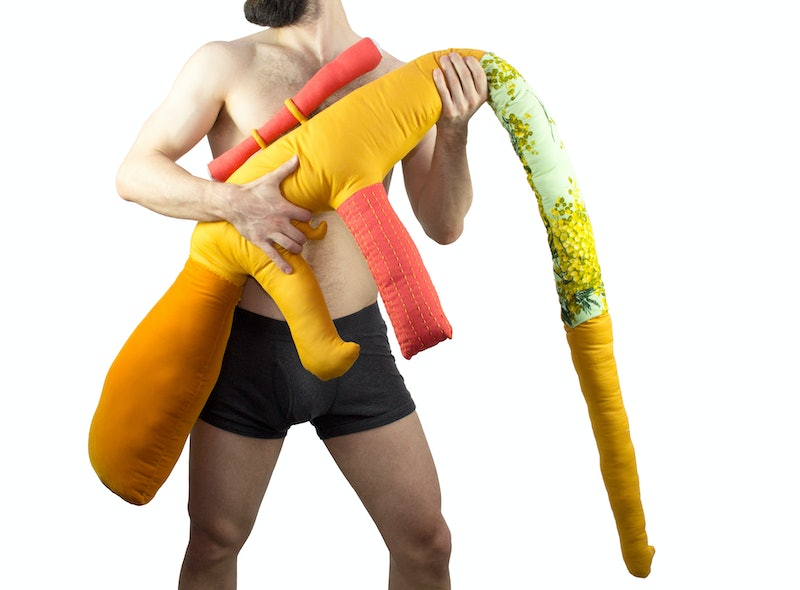 We all know the cycle so well at this point that even the recap of it has gotten exhausting: a horrific mass shooting, followed by public outcry, calls for gun control, a speech by President Obama, and a congressional standstill. Nothing ever seems to change — that is, until last week, when President Obama finally announced new executive orders aimed at curbing gun violence that will restrict where people can buy a firearm without a background check. While the order closes an important loophole, several analysts say it might not actually change much at all when it comes to the actual prevention of mass shootings.

As citizen bystanders, most of us continue to feel powerless, like rubberneckers. Some of us struggle to figure out how to respond to that feeling; artist Natalie Baxter responded by making gun pillows for a project she calls "Warm Gun".

Baxter, a 30-year-old videographer and artist living in Brooklyn, New York, originally hails from Lexington, Kentucky. She got the idea for the project while visiting home last year, when she saw a collection of handguns hanging on a friend's wall.

"Looking at this entire wall covered in guns felt uncomfortable and strange," Baxter tells Bustle. "I was on a big sewing kick at the time (my grandmother taught me to quilt when I was younger) and I came up with the idea of sewing a harmless, stuffed pillow gun. Now I have my own wall — actually nearly every wall of my apartment — covered in Warm Guns."

The idea planted, she went home and started making the guns. Baxter decided to model each gun pillow from photos of the real firearms used in a recent mass shootings. She managed to make over a hundred guns in 2015 — an impressive number only representing less than a third of the mass shootings that occurred. Baxter says she sewed obsessively — but still couldn't keep up.

"I feel powerless," Baxter says. "Hearing news about mass shootings so regularly is heartbreaking. I think most of the country feels the same way, and while I know I shouldn’t, I can’t stop consuming the news coverage that surrounds each of these episodes." So she keeps sewing.

"When I hear about shootings in the news, I do a Google search to find out what kind of gun was used for inspiration and then hand-draw a pattern onto fabric I’ve sourced from the garment district or my roommate’s Goodwill pile. I don’t pay much attention to scale or worry about exact proportions, so the guns tend to look cartoonish," Baxter says.

The social commentary of turning weapons into something traditionally "feminine" — a hand-stitched pillow that just so happens to also resemble a flaccid penis — is so simple and clever that it is truly disarming. Baxter is aware of the effect, and says a large part of her project is meant to be a comment on our culture of toxic masculinity and guns.

"I am intentionally emasculating an object of power ... I hope that I'm stirring up thoughts of gun control and gender issues, but I realize that to some people, I am making a cute stuffed replica of their favorite weapon."

"I went down to New Orleans to visit a friend and brought some of the first guns with me. I whipped them out in a room full of grown men who immediately started shooting at each other, making machine gun noises — turning into little boys with colorful, droopy, soft toys — guns I made using the historically feminine craft of sewing to construct. That’s when I realized I was playing with gender in this work. So I started experimenting with the concept and ended up photographing the guns with men in their underwear."

While her project might read as a mockery of macho gun culture and therefore politically aligned, Baxter says she doesn't see the project as either “pro-gun control” or “anti-gun.”

"I am intentionally emasculating an object of power, but I know that it’s no longer an object of only masculine power. I hope that I'm stirring up thoughts of gun control and gender issues, but I realize that to some people, I am making a cute stuffed replica of their favorite weapon."

Back home in Kentucky, Baxter says the response to her project is a bit more mixed than in Brooklyn.

"I hear a variety of comments [back home] from, 'These are so cute, I want to get one for my husband, he loves guns!' to 'Are you making penis guns?' Soft sculpture work in general is really approachable, especially when it is a recognizable form and made from colorful fabric."

Baxter invites the dialogue, adding, "Kentucky is where I was introduced to gun culture, and Kentucky is also where I learned the craft of sewing and quilting, from my tough Appalachian gun-owning Granny." (She adds that Granny, who is 92, approves of the photos of half-naked men.)

"I appreciate work that doesn't have just one takeaway or gives me that feeling of, 'Oh, I get it.' The gun debate has proven to be emotional for a lot of Americans; everyone has their own opinion about what should be done or not be done." She says she wants people to feel free to interpret her project the same way.

Baxter's Warm Guns are for sale on her website, and she hopes to have another exhibit showcasing them in New York City later this year.