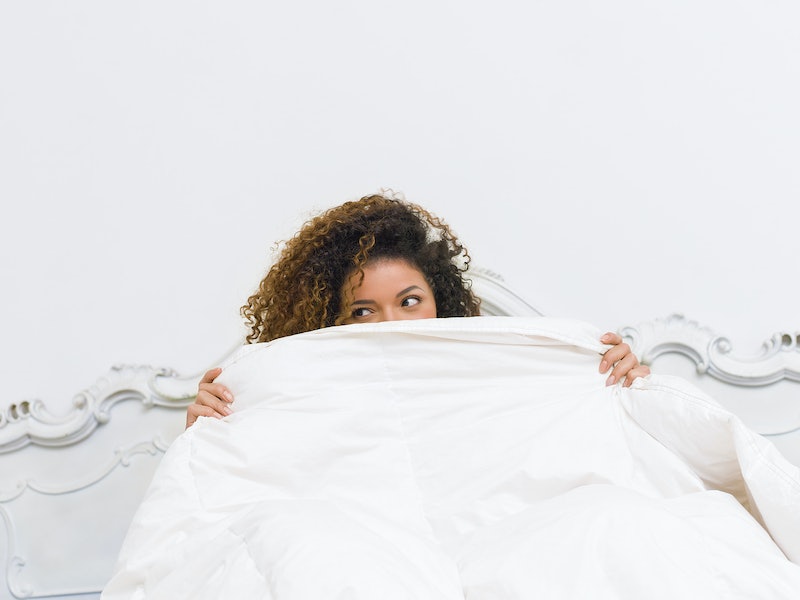 When it comes to PMSing, most of us feel free to talk openly about being bloated, moody, or craving chocolate; but sometimes, PMS can get much darker than that. Studies have shown that the time before we get our periods can be a hotbed of negative feelings, a time when many women experience low self-esteem, poor body image, and even body dysmorphia. And as it turns out, these negative feelings towards our bodies may be rooted in more than unfair societal beauty standards — they may actually be a product of our hormones themselves.

I know that in my case, a feeling of general dissatisfaction with myself is usually the first sign my period is coming. Before I even feel cramped, bloated, or extra-hungry, I'll find myself looking in the mirror and suddenly just feeling ... ugly. Logically, I know nothing about my physical self has changed, but the feelings are nearly dysmorphic anyway. All of the sudden, it feels like something about my face just looks gross, unfamiliar. When I feel this monthly pang of self-criticism and disgust, I know that my period is coming in a few days. But that still doesn't explain why it happens — especially when I tend to feel pretty good about myself during the rest of the month.

After years of experiencing this feeling, I decided to look for some answers. A cursory Google search of "PMS and body image" only turns up some vague coded language for the phenomenon on medical websites — the closest thing I could find was a mention of "decreased self-esteem" as a symptom of PMS. Online forums, however, spell out the phenomenon clearly.

My coworker Kelsea, 28, confirms that this happens to her, too. "I feel absolutely terrible about my body during PMS. The most anti-Body Pos thoughts about myself tend to flow through my head at that time. It's hard to do anything to stop it, but I usually try to dress in clothes that feel like sweats but still make me feel dressed up," she tells me. "It doesn't fix the problem, but it can help distract me from my own negative feelings."

Another coworker, Jordan, 26, echoes the sentiment. "Every month, I go through that very stereotypical cycle where one week I feel in control and somehow the next, I've taken a turn and just feel like a monster — bloated, puffy, and uncomfortable," she says. "I grew up with an eating disorder, so sometimes I think I'm harder on my body than I should be. But in the past few years, I've gotten a lot better at reminding myself that this is a part of life."

And for many of us, the fun might continue while we're menstruating, too: a small study of 44 women in 2013 published in the journal Perceptual & Motor Skills revealed that when participants were on their periods, they tended to perceive their body size as larger than it actually was.

Of course, feeling negatively about your body when you're PMSing makes some sense: if you're bloated and your skin is breaking out, it's not always easy to feel great about yourself. But in my case, the feeling of body dysmorphia precedes any of those physical changes. I asked Dr. Pari Ghodsi, an OBGYN, to explain why that might be.

"It seems that your symptoms are related to the drop in progesterone that occurs prior to your period. Some people are more sensitive to this drop and get depression-like symptoms," Dr. Ghodsi tells Bustle. "Basically, progesterone begins to build at the beginning of your cycle, peaks mid cycle for an egg to be released, and when the egg is not fertilized, the progesterone level drops. This drop in progesterone signals your body to shed the lining of your uterus."

Dr. Ghodsi tells Bustle that she doesn't find her patients are complaining to her about poor body image leading up to their periods — perhaps because it's not that common, or perhaps, I'd venture, because it's so common that women don't even tend to think of it as an unusual symptom.

For women like me who aren't on hormonal birth control, it's that drop in progesterone — and estrogen — that can leave you feeling seriously down before your period, especially compared to the confidence you feel the first two weeks of your cycle. In her book Moody Bitches, psychiatrist Dr. Julie Holland puts more of the blame on the drop in estrogen.

Lower estrogen levels cause serotonin levels to drop precipitously a few days before menstruation, which may be the basis of many PMS symptoms. Low levels of serotonin are implicated in depression, panic disorder and obsessive compulsive disorder ... you're even more physically sensitive to pain than usual, and more emotionally sensitive to criticism. You're less resilient in the face of stresses and feel sadder, hungrier, and more scared, tearful, and angsty.

It makes sense, then, that many women like myself would turn those negative feelings onto themselves and their own bodies, especially if they already have a tendency to do that when they're depressed. I'm not currently struggling with an eating disorder or body dysmorphia, but I have at low points in my past — and that drop in serotonin before my period might trigger those feelings to return, albeit, much more fleetingly.

If these negative feelings tend to reach crippling levels every month, you could also be dealing with PMDD, "a premenstrual disorder that is like PMS symptoms on steroids, where people meet criteria for full blown depression during the two weeks before their cycle," Dr. Ghodsi explains. "Although body image issues are not specifically cited [as a symptom of PMDD], feelings of worthlessness or feeling down about yourself would be in that genre."

That said, Dr. Ghodsi tells Bustle that she doesn't find her patients are complaining to her about poor body image leading up to their periods — perhaps because it's not that common, or perhaps, I'd venture, because it's so common that women don't even tend to think of it as an unusual symptom.

"I have patients come in and complain about depressive symptoms. Body issues are commonly mentioned, but are usually linked to feeling bloated and sluggish. I have not had someone come in and complain of body dysmorphia-like symptoms specifically that are unrelated to their weight, feeling bloated, or acne (i.e. they feel like their nose is big)."

It doesn't surprise me that many women wouldn't mention feeling dysmorphic around their period, since I've certainly never bothered mentioning it to my doctor, either. Being a woman and feeling like crap about the way you look is so normalized in our society that many of us might feel like this symptom isn't even worth mentioning.

There is a bright side to all this: understanding your cycle, and the fluctuations in self-perception that hormonal changes can trigger, can help you have a greater sense of control — perhaps even a more zen attitude — towards your own body image.

I know that for me, seeing how dependably these feelings change based on whether I'm ovulating or PMSing has made me have more compassion for myself, and actually made any negative feelings seem much less powerful in the longterm. All things must pass — including PMS, and the feeling that you look terrible. It's nice to remember just how arbitrary it all is every month.

"Every cycle is an opportunity for a fresh start, to make your life over the way you want it," Dr. Holland writes. "Pay attention to that critical eye, those judgmental thoughts ... because of lower serotonin levels, we are more 'raw' and less emotionally blanketed before we menstruate. It is a time to rest and reflect and to honor deep feelings."

And that's true, even when those feelings are negative. If you feel badly about yourself before your period, you can recognize and feel compassion for those critical feelings. You can use them to remind yourself that beauty is not just in the eye of the beholder — for some of us, it might also be in the shedding of the uterine lining. I consider these feelings my monthly reminder that how I feel about myself is highly subjective and subject to my mood. And in a way, I find that very comforting.

More like this
So You're Having A Medication Abortion
By Dana Smith
Olivia Munn Got Real About How Her Body Hasn’t “Snapped Back” Post-Pregnancy
By Stephanie Topacio Long
How To Fight For Reproductive Rights, Based On How Much Time You Have
By Courtney Young
6 Abortion Advocates To Follow On TikTok
By Sara Youngblood Gregory
Get Even More From Bustle — Sign Up For The Newsletter