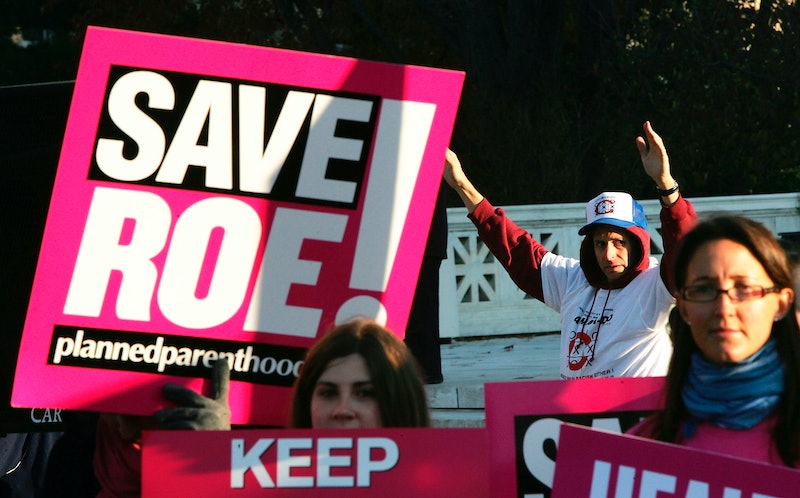 Last summer, when I was covering the protests in Texas surrounding the state’s stringent anti-abortion law, I noticed a significant demographic disparity in the crowds. While the anti-abortion side was more or less evenly split between women and men, the vast majority of pro-choice demonstrators were women. To be sure, there were some men in the mix — the guy with the “Rick Perry Sucks” shirt stands out in my mind — and there were numerous pro-choice men fighting alongside Wendy Davis in the state legislature. But the overall gender disparity between the demonstrators on the ground was striking.

While this week marked the 41st anniversary of Roe v. Wade, pro-choice activists haven’t exactly had a lot to celebrate lately. In the last three years, more laws have been passed restricting abortion access than in the last 10 years combined. Wendy Davis’ crusade against anti-abortion measures in Texas was greeted with much fanfare, but she wasn’t actually successful, at least not in the short term: Texas Republicans ultimately passed the bill she was filibustering. Last year also saw the first attempt to restrict abortion at the city level, and while that Albuquerque measure failed, anti-abortion activists have made clear that it’s a tactic they’ll try again.

As man who is also a feminist, I feel somewhat uncomfortable making the argument that the pro-choice movement needs more men. I cringe reflexively at the idea of women being dependent on men, even if it’s to obtain a larger political goal that advances women’s independence in the long run. It just reeks of “knight-and-shining-armor”-ism, and that’s in direct opposition to most feminist values. But as with any social cause, this fight is ultimately about changing minds, and the the more allies you have on your side, the more minds you’re going to change.

I know that, living in the Bay Area, the chances of another guy actually criticizing me for expressing that I’m pro-choice are very slim. But there’s always that fear in the back of my head, that small but persistent voice warning me not to stray outside of the lines. Even knowing that my risk of being ridiculed is low — and knowing that such ridicule isn’t something to care about — doesn’t silence that voice.

I live in California, which was the only state to pass any pro-choice legislation in the last year. While I’m sure plenty of the men I know around here do support abortion rights, I can’t think of a single time I’ve heard any of them even bring up the topic — let alone express their positions on the issue. Even in political conversations, there seems to be an unspoken understanding amongst men that reproductive rights is a “women’s issue” that we should just steer clear of.

This is a problem, because it allows the fight for abortion rights to become marginalized, both inside the progressive movement and in broader political discourse, as a “women’s issue.” It perpetuates the false idea that only women have reason to care about abortion access, and that's a major flaw in how we advocate for continued access to legal abortion.

For years, anti-abortion activists have argued that abortion neglects the feelings and rights of men. I don't hear a lot of pro-choice response to that, other than, "abortion is a women's issue, and we as men have no right to interfere." The decision to end a pregnancy should always ultimately lie with the woman whose body is implicated, but men are deeply invested in choice, and should not, as some would argue, simply recuse themselves from the relevant political conversation.

To the guys reading this, I’m betting most of you can probably think up a situation wherein easy access to abortion clinics would — or would have — made all the difference. And yet men seem to feel some inhibition in speaking up about a woman's right to choose. Why?

All I can speak to is my own experiences with gender expectations, but given those experiences, I’m not surprised that a lot of pro-choice guys find it hard to speak up about abortion.

The gender messaging that men receive during their formative years is pervasive, even in the most progressive environments. I grew up in Marin County, Calif., an insulated bubble of liberalism if there ever was one. But even I developed a pretty good idea of what “men” are and aren’t supposed to do at a rather young age. The take-home points were: Men ultimately want sex more than anything else; men bond with each other primarily over the pursuit of sex; men have few legitimate reasons to get close to women, except in pursuit of sex; and men don’t experience, let alone express, any emotional insecurities.

Within the worldview circumscribed by those values, there’s very little room for empathizing with pregnant women, or articulating the importance of a woman’s right to control her own body. It’s not that it’s explicitly discouraged — it just isn’t on the radar, or at least it isn’t supposed to be. Of course, that’s nonsense, because plenty of men do empathize with the incredibly difficult choice that many pregnant women and couples are faced with. The problem is, there isn’t much of a space to express or vocalize this empathy within the traditional male gender role — especially in the presence of other guys.

At least, it doesn’t feel like it. What’s ironic and ridiculous about this whole thing is that most men probably don’t pass judgment on their peers for violating these unwritten rules of manhood. I know that, living in the Bay Area, the chances of another guy actually criticizing me for expressing that I’m pro-choice are very slim. But there’s always that fear in the back of my head, that small but persistent voice warning me not to stray outside of the lines. Even knowing that my risk of being ridiculed is low — and knowing that such ridicule isn’t something to care about — doesn’t silence that voice.

But this is something that I, and all the other pro-choice guys out there, simply have to get over. We need to understand that a woman’s choice to have or not have an abortion ripples outward and affects us as well — not just theoretically, but practically. It’s in our interest for women to have the right to choose, and we can go a long way to preserving that rapidly diminishing right if we simply make ourselves heard.