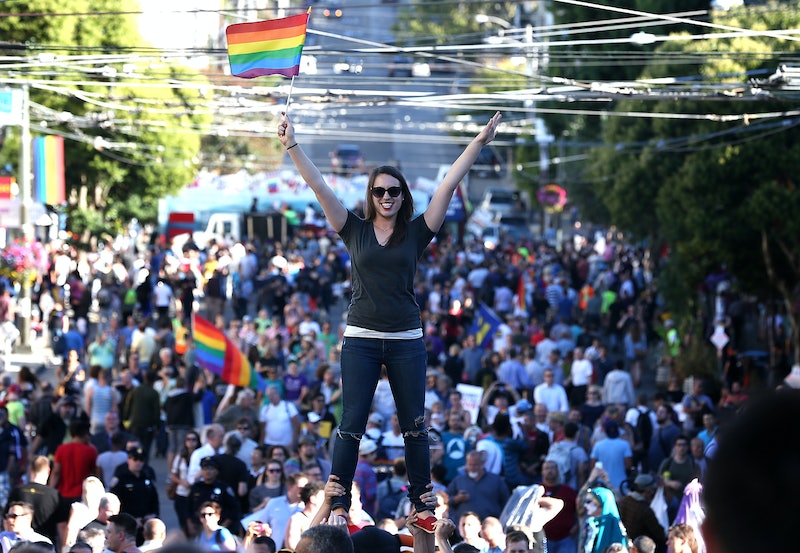 Earlier this week, California Governor Jerry Brown signed off on legislation that allows non-physicians, such as nurse practitioners, to perform abortions. It’s the first and only piece of pro-choice legislation enacted anywhere at the state level this year, which reinforces California’s reputation as the state most likely to eventually dissolve into a commune.

Or is it? What, if any states, are really the most liberal places in America? Here are Bustle's winners, by the progressive issue:

If you want strong gun control laws, go to California. The Golden State conducts a universal background check prior to every firearm purchase. Assault weapons, high capacity clips, and 50 caliber rifles are all banned. You’re only allowed to buy one handgun per month (oh, the horror!), and even then, you have to wait ten days between paying for and receiving the actual gun. Also, if a cop responds to a domestic violence report and finds a gun at the scene, they’re required to confiscate it.

In 2007, the Governator Arnold Schwarzenegger passed a law requiring handguns to be built with microstamping technology. This enables forensic ballistics analysts to trace expensed cartridges to the guns from which they were fired and, thus, to the registered owner of the gun. The law was initially stalled by the gun lobby, which cited technological and patent issues, but those issues were resolved earlier this year, and now all semiautomatic handguns sold in California are required to have the technology.

California is the only state to receive a 4-star rating from the Brady Campaign, which tracks gun control laws. There are many, many more gun restrictions in California; there’s a good list on page 4 of this brochure.

Did you know today is National Coming Out Day? When it comes to LGBT rights, marriage equality tends to get all the press, but there are plenty of other metrics by which to judge a state’s LGBT-friendliness. Things like discrimination in employment and housing, bullying, hate crimes, and hospital visitation rights are just as significant concerns as gay marriage, and the laws governing them vary drastically from state to state.

In order to get a rough idea of which states, generally speaking, are the most LGBT-friendly, we looked at eight different protections and which states provided them. The protections we counted were:

Four states offer all of these protections: California, Connecticut, Washington, and Vermont. However, we’re going to give California the edge, because it offers two additional LGBT policies that every other state lacks: A ban on gay conversion therapy (“pray the gay away”) for minors, and a law that lets transgender children from K-12 to use whichever restroom they want in public schools, regardless of their biological gender.

It doesn’t seem like a week has gone by in the last couple of years without one state or another passing some absurd law that somehow seeks to undercut Roe v. Wade. Texas’s law banning abortion after 20 weeks got the most attention, but that wasn’t even the worst of the lot. North Dakota passed legislation that would have banned abortion at six weeks (!). A judge quickly declared it “clearly unconstitutional” and issued an injunction until the law can be fully reviewed. An Arkansas law banning abortion after 12 weeks was similarly blocked.

But there are states that aren’t flagrantly violating Roe v. Wade. The ones with the most lenient abortion laws? Vermont and Oregon. Neither state really has any significant laws restricting abortions, as do most other states. (Even California, which may have passed pro-choice legislation this week, still doesn’t allow abortions after the fetus has reached viability.) One could argue that Vermont is the slightly more lenient of the two winners: 57 percent of Vermont counties have an abortion clinic, while only 25 percent of Oregon counties do. But if you look at how many women live in a county with a clinic, it’s roughly the same (~23 percent for both), so we’re going to call this one a tie.

It somehow feels fitting that a state with as much obvious natural beauty as Vermont is also the greenest. Vermont has successfully combined a minuscule population with progressive environmental policies to consistently rank as the greenest state in the union. It has the smallest carbon footprint and releases the fewest carcinogenic toxins of any state, has a lower rate of toxic waste than all but two other states (Hawaii is the winner for that one), and derives 28 percent of its energy from alternative sources.

But California again deserves mention here, because even though it’s slipped in recent years, it still boasts an impressive environmental record — especially for a state of its size. Californians recycle a larger share of their waste (68 percent) than any other state, and the country produces more BTUs of renewable energy per year than all but two other states. However, its sheer size brings it down a bit, as evidenced by the fact that it produces more tons of CO2 every year than any other state.

You starting to see a trend? Generally speaking, border states tend to have harsher immigration laws than non-border states, for obvious reasons. It was Arizona that passed SB70, one of the harshest immigration laws on the books, and it was in Arizona that Sheriff Joe Arpaio operated a backyard concentration camp for suspected illegal immigrants (until he was put under federal supervision for multiple constitutional violations).

But California bucks that trend, as Governor Jerry Brown recently signed a bunch of legislation that eases the state’s already-lenient immigration policy. Now, undocumented immigrants in California can obtain not only driver’s licenses, but law licenses, too. They’re also allowed to monitor polls for elections. Furthermore, and perhaps more significantly, local law enforcement is banned from detaining immigrants for deportation if they’ve been accused of minor, nonviolent crimes. It’s also now illegal to threaten an undocumented immigrant with deportation.

It wasn’t always this way, though. Brief California history lesson: In 1994, back when California was sort of still a red state, then-Governor Pete Wilson championed Proposition 187, a ballot initiative aiming to severely tighten state immigration policy. Proposition 187 would have established a state-run citizenship screening program and, similar to Arizona’s SB1070, required law enforcement agents to investigate an immigrant’s citizenship status if they suspected (such a slippery word) them to be in the state illegally.

The ballot proposition passed — but before it could take effect, a federal judge ruled it unconstitutional, on the grounds that it infringed on authorities’ ability to enforce federal immigration policy. Because Wilson, a Republican, had made Proposition 187 a centerpiece of his re-election campaign, the measure became associated with the Republican Party in California, and is often credited as a reason the state turned blue shortly thereafter.

Colorado and Washington passed ballot initiatives last year legalizing the sale and possession of recreational pot. This was groundbreaking; no other state lets its residents smoke weed just for fun, although (of course) Oakland, California does (as long as you’re over 18). Just about every country on the planet has banned recreational marijuana to some degree (except, bizarrely, for North Korea). Furthermore, the Justice Department has said it won’t interfere with the laws in Washington and Colorado, which fly in the face of federal policy. By 2014, when the initiatives are in full effect, Washington and Colorado will have some of the most easy-going marijuana policies anywhere in the world.