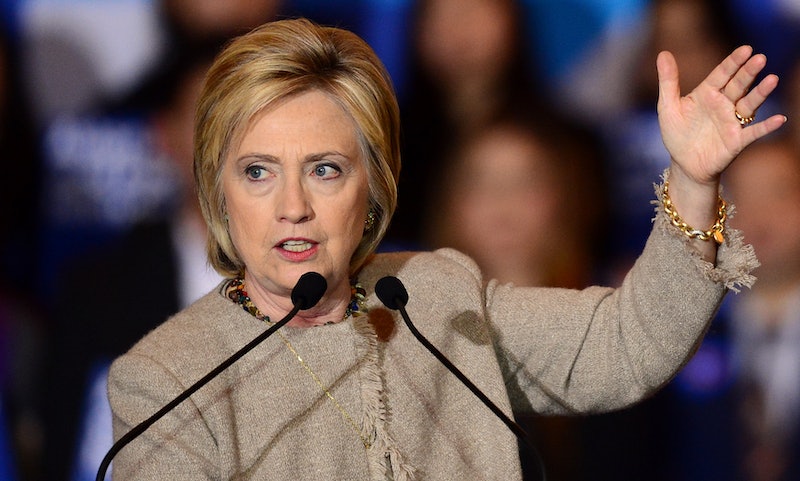 Hillary Clinton is getting some impressive star power backing her presidential bid as she heads to New Hampshire for a campaign event. The Democratic front-runner was in Portsmouth for a Women for Hillary event on Friday. She was joined by soccer superstar Abby Wambach as well as another celebrity who took over social media duties for the day. Needless to say, Lena Dunham's takeover of Hillary Clinton's Instagram account has been pretty awesome. In her first post, the writer-director showed off her patriotic campaign outfit, complete with red, white, and blue shoes and a trio of buttons on her stylish striped knit dress.

Dunham's second post features her and Wambach, whom she refers to as a "dream babe." Judging by Wambach's personal Instagram account, which also features Dunham on a few posts, the feeling is mutual. Wambach had previously voiced her support for Clinton in an interview with MSNBC. The athlete cited representation as one of her defining motivations for standing behind the candidate "I like to think that a 10-year-old girl can see someone who looks like them… in the Oval Office — that’s motivation for me," Wambach said. Dunham similarly felt compelled to campaign because of her previous lack of political awareness. She reportedly didn't vote until age 22 but now is far more active in encouraging voters, especially her peers.

Friday's foray into social media marks the second time Clinton and Dunham have collaborated over the course of the former secretary of state's campaign. The Democratic presidential hopeful had previously been interviewed by Dunham. Their sit-down conversation marked the launch of Dunham's feminist newsletter Lenny. Clinton's answers were especially revelatory. Over the course of the interview, she highlighted the ways that her politics changed as she entered adulthood and admitted that she is a feminist. Clinton said:

I'm always a little bit puzzled when any woman, of whatever age but particularly a young woman, says something like, "Well, I believe in equal rights, but I'm not a feminist." Well, a feminist is by definition someone who believes in equal rights! I'm hoping that people will not be afraid to say — that doesn't mean you hate men. It doesn't mean that you want to separate out the world so that you're not part of ordinary life.

It's clear that Dunham truly enjoys campaigning for Clinton as well as working with her. Dunham has previously stated that she deeply admires her. Taking the reins of her Instagram is yet another honor Dunham can add to her list of Clinton-related accomplishments.