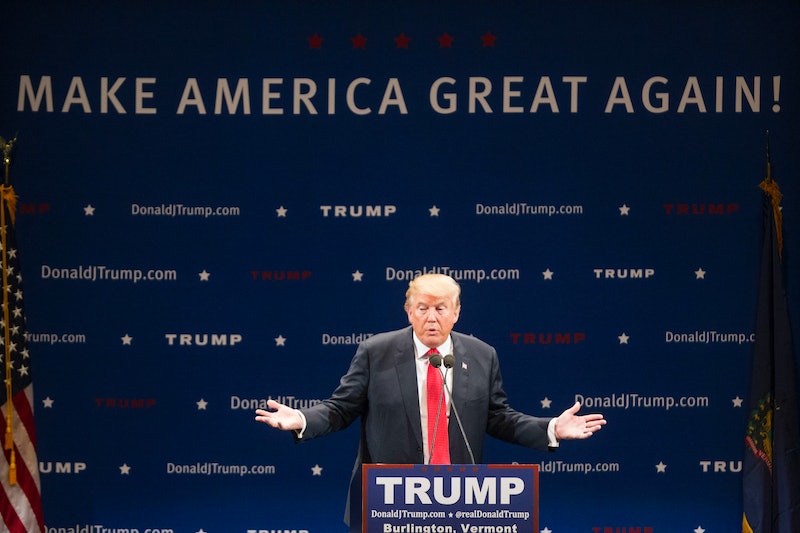 Republican front-runner Donald Trump has been quickly working his way around the country, making campaign stops in places like Mississippi and South Carolina, and the latter location saw a whole lot of action in terms of dissent on Friday. Despite a packed Winthrop University Coliseum, some of the most visible attendees of the campaign event were not supporting the candidate. According to CNN, a peaceful Muslim protestor was ejected from the Trump rally in Rock Hill, despite allegedly never saying a word to the candidate or his fans. The 56-year-old Rose Hamid stood up during a section of the Donald's speech in which he discussed Syrian refugees and a possible link to ISIS.

Hamid was reportedly wearing a shirt that read "Salam, I come in peace" and stood with a few other protestors. As she stood up in the stands behind the candidate, supporters throughout the stadium began chanting Trump's name and he turned around to ask if there was a problem. It has been reported that such chants are considered protocol in the face of more visible protests against the candidate, especially at rallies. Though Hamid told CNN that her fellow rally attendees were generally pleasant prior to her demonstration, she said that being escorted out in such an alienating manner was anything but nice. Hamid was reportedly accused of having a bomb with her quite vocally by some Trump supporters, and the crowd allegedly booed as she was escorted from the rally.

Hamid's peaceful, silent protest was meant to raise awareness of the effects of such divisive rhetoric. She elaborated on this point in interviews with CNN and The Guardian. Hamid said:

This demonstrates how when you start dehumanizing the other, it can turn people into very hateful, ugly people. It needs to be known... It was really quite telling and a vivid example of what happens when you start using this hateful rhetoric and how it can incite a crowd. I don’t even think he believes in the rhetoric he is spewing.

Trump rallies have been particularly heated as of late as demonstrators and the candidate's supporters continue to clash. A Black Lives Matter protestor was reportedly physically assaulted by Trump supporters in Birmingham, Alabama, in November. A campaign stop the night before Trump's Rock Hill appearance in Burlington, Vermont, was also interrupted by anti-Trump demonstrators. The protestors were far more vocal, however, and a large group was thrown out while those entering the Flynn Center were reportedly asked to pledge their allegiance to the candidate.

The Council on American-Islamic Relations is now urging Trump to apologize to Hamid and, rather than run from those who feel differently than the candidate, engage with them. National Executive Director Nihad Awad had this to say about the incident:

The image of a Muslim woman being abused and ejected from a political rally sends a chilling message to American Muslims and to all those who value our nation's traditions of religious diversity and civic participation. Donald Trump should issue a public apology to the Muslim woman kicked out of his rally and make a clear statement that American Muslims are welcome as fellow citizens and as participants in the nation's political process.

Trump's only response thus far to Hamid's removal came just as she was being escorted out of the building when he said that there is "hatred against us that is unbelievable." Trump's campaign has not yet issued any public statements.