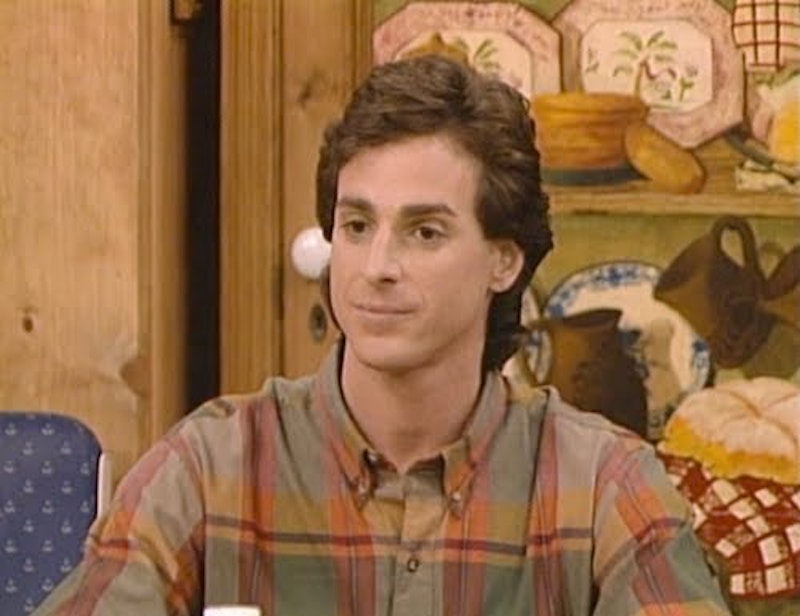 Full House. The show that concretized my love for single dads. Just kidding. But, seriously, did you know how ahead of its time Full House was? Better yet, did you know that Danny Tanner was a feminist? I didn’t. At least, not when I first watched it. (Of course, I was a young child and wasn’t aware of gender politics at the time, but still.) It wasn’t until I revisited the series — and viewed it through my now feminist lens — that I was able to discern the Tanner family’s progressivism, specifically in the patriarch of the household: Danny.

Danny Tanner was a feminist, and though he might not have known it himself, he was in effect, an ally of the feminist movement. If you're still not convinced, see below.

1. He Didn't Conform To Gender Norms

Danny didn’t choose single fatherdom, single fatherdom chose him. Danny could have continued with the assumed position of "father," but instead he became both the mother and father of the household. He did all the stereotypically motherly things, and he did them without fear of his own waning machismo. In fact, Danny’s obsession with keeping a tidy house could have been seen to friends and family members as a feminine trait, but Danny didn’t care. He loved to clean, provide, and show affection.

2. He Was Proud To Be A Single Dad

Danny wasn't a regular dad; he was a cool dad. He was super proud to be the father of three girls and never shied away from embracing that.

3. He Didn't Rush Into Another Marriage

Mr. Tanner had his romance connections here and there throughout the series, but he never decided that he would get married for the sake of getting married — or for the sake of returning to a heteronormative household structure.

4. He Never Tried To Hand His Parenting Responsibilities Off To His Girlfriends

Danny knew that wouldn't have gone over well.

5. But He Wasn't Afraid To Ask For Help When He Needed It

However, when things got rough and Tanner felt in over his head, he had no problem admitting that he could use a little help.

6. He Was A Purveyor Of Female Empowerment

When Michelle competed in that go-kart race in Season 7 Episode 20, who was by her side? Danny Tanner, everybody. He also dropped this line of feminist wisdom during that fateful episode: "Joey's a boy and he can do ballet, and you and Aunty Becky are girls and you can build cars. As long as you're not hurting anybody, you can do anything you want to do." Have truer words ever been spoken? Probably, but these are still pretty good.

7. He Treated His Girls With Equality

Piggybacking off that last point, throughout the series, Danny didn’t treat the girls differently because they were girls. He raised them to be strong, smart, and autonomous citizens of the world.

8. He Encouraged His Daughters' Independence

The Tanner girls were encouraged to pursue their individual interests — apart from what the rest of the family was doing.

9. He Taught Them That Looks Were Not Everything

The Tanner household didn't place too much emphasis on looks. In fact, when D.J. was struggling with her body image, Danny Tanner told her, "How a person looks on the outside inside nearly important as who they are on the inside." Boom.

Danny had love interests come and go — there was Vicky, then Claire, and Cindy — but Danny never dated them just because they were easy on the eyes. I mean, see the point above.

11. He Had Close Relationships With Males

Danny had an unabashedly close friendship with both his brother-in-law Jesse, and college best friend, Joey. He talked to his bros about real things: family, feelings, etc.

Danny's respectful and platonic relationship with Becky seems like a boring reason to make Danny a feminist, but this kind of male and female friendship was rarely found on '90s sitcoms, where "will they, won't they" sexual tension was always the norm.

13. He Wasn’t Afraid Of Showing Emotion

“Let’s face it. I’m a lean, mean, hugging machine.” Now that’s a man who’s willing to let the cold, hard grasp of societal masculinity not hold him back.

Danny Tanner. Heart-to-heart talk aficionado, lover of Lysol, feminist, or all of the above? You decide.