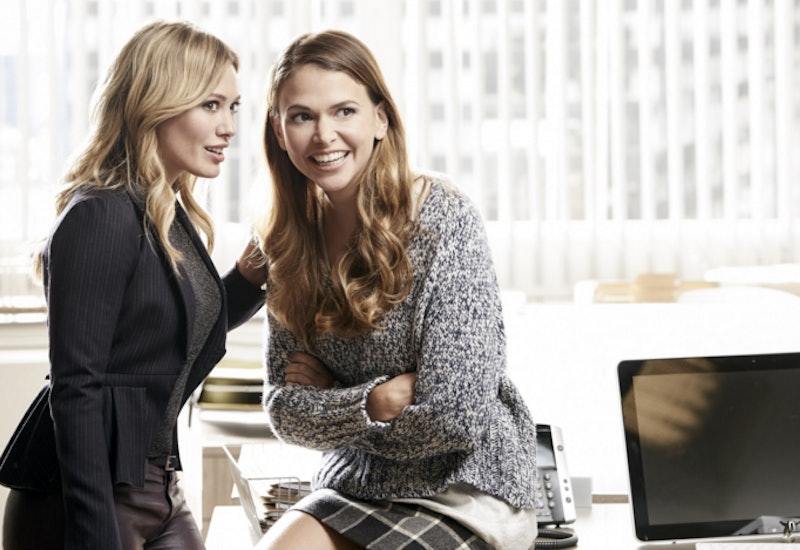 Younger returns to TV Land on Jan. 13 and I couldn't be more excited about it. Season 1 managed to be smart, surprising, super-feminist, hilarious, and totally willing to take on workplace politics. Pretty impressive for a half-hour comedy, though it shouldn't be a shock considering the people involved in making the show (it's created by Darren Star, who brought Sex and the City to TV). Luckily, it seems that in Season 2, Younger will continue to address both ageism and sexism in the workplace, and based on its track record, will do an excellent job.

Sutton Foster stars as Liza Miller, a 40-year-old woman who is the mother to a teenager and started the series in the middle of a divorce, and desperately in need of a job. The problem was, her age seemed to count against her in every job interview. Sure, this shouldn't be the case, but the sitcom proves a harsh truth about the working world: A woman's age can affect her employment opportunities. In fact, according to Bloomberg, a 2015 study from the National Bureau of Economic Research "found 'robust' evidence of age discrimination in hiring female candidates," with the website even remarking that "For women, age discrimination starts earlier and never relents." That unfortunate reality is what leads Liza to pretends that she's 26 when she goes for an interview with a publishing house and, what do you know, she gets the job! But that conceit isn't the only way Younger has addressed workplace discrimination.

When Liza gets a job as an assistant at the publishing house, she has to keep up the pretence of being 26 years old. Somewhat comedically, her line manager, Diana Trout, is the same real-life age as her, and incisive comparisons between the two characters show how difficult it can be for women to navigate the world of work, and love, as they get older. Conversely, new BFF Kelsey Peters, played by Hilary Duff, is a successful twenty-something, working her way up the corporate ladder with ease. Pitching Liza firmly between these two very different women helps Younger explore the impact ageism and sexism can have.

One theme which Younger explores continuously is technology. Posing as a 26-year-old, Liza has to appear au fait with all the modes of technology millennials use, from texting to tweeting to blogging to emojis. At first, this is a huge challenge, but it soon becomes clear that technology is the very thing separating the generations, and Liza has to get her head around it if she's to keep passing as a twenty-something. Her appearance too must change, and she starts dressing younger for work. The way that people treat her following this visual change is noticeable.

Another thing separating the women at Liza's new workplace is their after-work activities. While Kelsey parties most nights, and is no stranger to having a hangover, Liza's boss Diana spends evenings attempting to go on dinner dates. As a forty-something, Diana is trying to prioritize love over career, after spending years climbing the corporate ladder. She is incredibly successful and great at her job, but to achieve that, she set aside her personal life. This speaks to the pressure women often face to "have it all," meaning satisfying professional and personal lives, and how challenging that can actually be in practice — for anyone.

In contrast, Liza is infiltrating the workplace and finding success as a much younger woman who is still years away from age-based discrimination. Of course, this is all a facade, as in reality she has already devoted years to her family and is now returning to the workforce. In addition to exemplifying the pressures put on women to succeed in all aspects of life at a young age, Liza's success proves that she's every bit as good a hire as the others in her office. But had she not lied about her age, she may never have been given the chance to show that.

Sure, Younger is a sitcom, but its comedic premise is firmly grounded in a harsh truth about the world we live in. And the show examines not just how a woman's career choices can be subject to sexism, but how other aspects of their lives are affected by it too. It seems that focus will only grow in Season 2, as iIn the season premiere, Liza starts chatting to a guy in a bar and when she tells him she's 40, he makes a fast retreat. This instant, brutal dismissal is akin to the job rejections she faced before buckling and pretending she was younger. Again, age matters.

Eventually, Liza's real age will be revealed to everyone, and the first episode of Younger Season 2 already shows a shift in dynamics from the characters who have found out her secret. It'll be interesting to see what happens when Liza's coworkers finds out how old she is. I'm particularly eager to see how the head of the company, Charles, reacts, as he may have a much more complex response than other characters. He clearly has a crush on Liza, but won't act on it because he thinks she's in her twenties and wants to be with a woman closer to his own age, so the truth coming out could seriously impact the future of their relationship.

While Younger Season 2 is sure to keep having fun with its age-defying premise, I'm grateful that Season 2 will continue to examine the more serious issues that come with it in such a smart way.