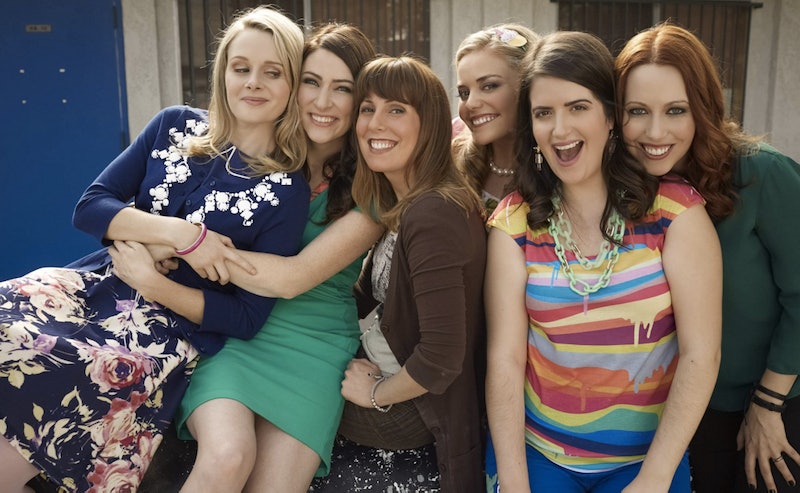 On Jan. 13, TV Land premiered its awesome new show Teachers . Produced by Alison Brie, and co-written by the cast themselves, comedy troupe The Katydids, the female-driven sitcom is hilarious, insightful, and totally cute. But the most exciting thing about Teachers has to be that, both behind the scenes and on the show itself, it consistently puts women front and center. "Our situation was very unique," The Katykids said about Teachers behind the scenes when I reached out to them about the series. "Our writers room is full of strong females ... And our two male showrunners, Ian and Jay, were very supportive of our voices and ideas. We also had very strong opinions and views for these characters which made them strong and unique."

It feels as though feminism is at the core of Teachers. For The Katydids, the series is the perfect platform to showcase their talents, as both writers and comedians, especially as one member of the group used to be a teacher! Setting their sitcom in a school is a smart move. Not only is there so much material to explore — from picture days, to lesson inspections, to anti-bullying campaigns — there's also the chance to showcase the camaraderie between this group of women in the staff room. Each of the characters is fierce, fearless, and dealing with their own real-life dilemmas while trying to teach a classroom of young people. Here are just some of the reasons why you're going to fall in love with Teachers over the course of its first season.

There Are No Romantic Leads

Unlike most other sitcoms on television, Teachers doesn't rely on a romantic storyline between lead characters to keep viewers watching. What's exciting is that the ensemble cast is a group of talented and successful women, who write their own material.

The Katydids said, "We wanted to show that women have all kinds of things going on in their lives outside of their romantic relationships, we just couldn’t fit in male romantic leads this season. It seems like a lot of content targeted toward women leans towards romance and Teachers isn’t about the romance. TV has been there, done that."

It's so refreshing to hear that this series, written and produced by women, is kicking off by focusing completely on female friendship and careers. I hope that more shows follow suit.

It Features Women Who Choose To Be Single

Often, the only reason a female character stays single on TV is because she just went through a bad break-up, or can't seem to find a guy she likes. On Teachers, however, some of the characters actively choose to be single, knowing that their lives are still busy and fulfilled with things besides relationships. And single or not, the titular teachers should be relatable to female viewers, as The Katykids said, "They are flawed characters who are facing issues that a lot of women in their 20s deal with — the only difference is they are working through their problems while trying to mold America's youth."

It Breaks Down Stereotypes

Like Bad Teacher before it, Teachers does an amazing job of altering the public's perception of what being a teacher is really like. "There is such a wonderful nostalgia surrounding it and something people so clearly remember," The Katykids said of teaching. "We were able to think back to our time in elementary school and take events that we experienced (like Field Day, Picture Day, etc.) and put our own twisted spin to it." On Teachers, that "twisted spin" results in some hilarious dark humor.

And Addresses Everyday Misogyny Head On

"We had a lot of fun writing the misogynistic photographer in the 'Picture Day' episode," The Katykids explained. "It was a chance to take power back from the collective hundreds of times we've have had some jerk creep on us." The fact that this group of women are using their experiences to inform the show only makes it more feminist and awesome. The characters always stand up for themselves, and have no qualms over calling out a creep.

It Scored Some Exciting Cameos Already

A whole host of comedy legends appear on Season 1 of Teachers , and it's totally testament to the hard work of The Katydids. "There are so many people we are excited about having on the show: Rob Riggle, Alison Brie, Ian Roberts, Rob Corddry, Kerri Kenney, Lacey Chabert, Jesse Bradford, Sam Richardson," they said. "A lot of people we really admire agreed to be on Teachers."

Between that exciting roster of guests and the hilarious main cast, Teachers is sure to win over audiences with its humor and feminism.

More like this
This Dark 'Happy Valley' Theory Is Staring You Right In The Face
By Sophie McEvoy
Shonda Rhimes Responded To The Surprise Exit Of A Day 1 'Grey's Anatomy' Figure
By Grace Wehniainen
Everything To Know About A Potential 'Lockwood & Co.' Season 2
By Gretchen Smail
This 'Gossip Girl' Wardrobe Error Has Gone Viral On TikTok
By Alyssa Lapid
Get Even More From Bustle — Sign Up For The Newsletter
From hair trends to relationship advice, our daily newsletter has everything you need to sound like a person who’s on TikTok, even if you aren’t.