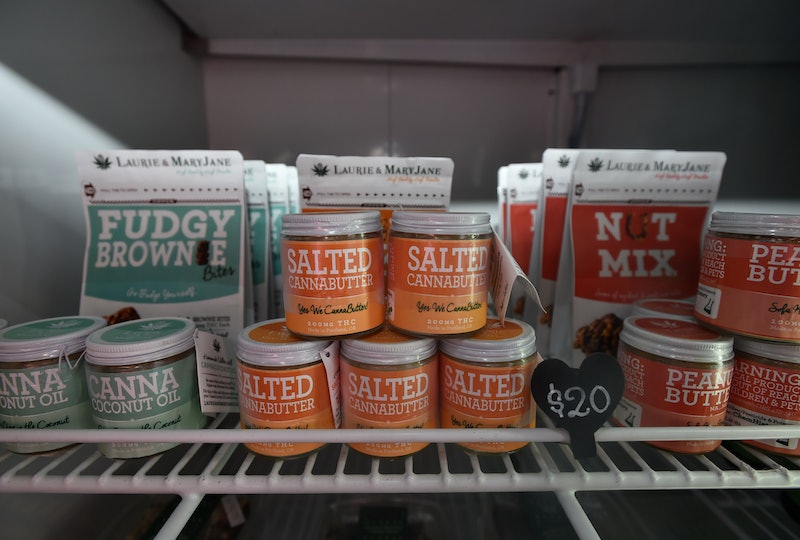 Whether you enjoy using marijuana to relieve anxiety, or you use it medicinally as an all-natural pain reliever, or you've never tried the stuff but you're considering trying it soon, it would probably benefit you to know how hash, wax, edibles, and regular weed are different. After all, not all kinds of marijuana consumption are created equal. Moreover, your method of cannabis consumption should really depend on how frequently you use marijuana, and what you're using it for.

Over the past four years, I've tried almost every form of marijuana consumption, and I can tell you from experience that no two highs are exactly the same. Personally, I'll always choose smoking plain old weed over eating edibles, dabbing wax, or smoking hash. The last time I ate an edible it took a full day to wear off, wax makes me freak out super hard, and all I can remember about hash is that it's not that much different (at least in my experience) than regular weed.

Ultimately, experience is the best way to determine which form of marijuana consumption will be best for you, should you decide to partake. But educating yourself on the ways hash, wax, edibles, and weed are different will help you make a more informed decision regarding your future cannabis consumption. Here are five things you should know about the differences between hash, wax, edibles, and weed.

1. Smoking Weed Is Usually The Easiest Way To Make Sure You Get The Right Dosage

As Vice reported back in 2014, you would have to smoke somewhere between 20,000 to 40,000 joints within 15 minutes to overdose on pot, so fatally overdosing on marijuana isn't really something you should be worrying about. However, depending on how experienced of a stoner you are, and what method of cannabis consumption you're enjoying, it's absolutely possible that you could unintentionally consume enough marijuana to make you really uncomfortable and paranoid for a couple of hours. Or, you could underestimate yourself and end up not getting as high as you wanted to.

The easiest way to avoid this and ensure you get the right dosage every time is by smoking regular weed. According to The Daily Beast, "50 to 60 percent of the THC in a joint can get into the blood plasma, and peak concentrations come in 5 to 10 minutes." Comparatively, when you eat cannabis, only 10 to 20 percent of the cannabinoids in your edible will reach your blood plasma — and it'll take about an hour or two to get there. So, if you're used to the nearly instantaneous high of smoking regular weed, you could end up eating too many edibles while you're waiting for their THC to kick in. Of course, if you live in a state where it's legal, the correct dosage will be marked for you, in which case edibles might be safer.

Since hash and wax are way more concentrated than regular weed, it can be easy to consume too much too fast. Which leads us to...

2. Wax-Induced Highs Are Usually The Most Intense & Can Be Highly Hallucinogenic

Back in 2013, Complex addressed pretty much every question there is about marijuana wax. In their article on the topic, Complex reported that marijuana wax contains 80 percent THC, and it's so hallucinogenic that several users have been hospitalized from just one dab of the stuff.

Personally, I don't like wax and I wouldn't recommend it to anyone. I've never been as uncomfortably high as I was when I did my first (and only) dab. Plus, my lungs hurt really bad the next day.

3. Edibles Are The Healthiest Option For Your Lungs

Eating cannabis or using tinctures is always going to be better for your lungs than smoking it is. The fact is, smoking anything creates combustion, and combustion creates harmful toxins and carcinogens which we then inhale into our lungs. On top of that, 88 percent of the combusted smoke gases from marijuana don't even contain cannabinoids.

If you're not familiar with it, the term, "skunk" or "skunkweed" refers to a cross breed of cannabis sativa and cannabis indica. Since "skunk" isn't pure sativa, smoking it can cause a heavier high; and according to The Guardian, it also contains a higher concentration of THC than hash. Evidently, "skunk" contains 15 percent THC, whereas hash contains only five percent. So while hash is certainly more concentrated due it's compression, it doesn't trump all strains of marijuana where THC concentration is concerned.

The Colorado Pot Guide explains that traditional hash is made when kief is compressed into blocks. So, traditional hash is essentially just compressed kief. In case you've never heard of kief, it's just another word for the THC crystals which exist on every marijuana plant. Kief looks like green dust, and if you've owned a grinder for very long, it's probably coated in enough of the powdery goodness to fill a decent-sized bowl. That said, the high from hash can be intense. According to the cannabis site Royal Queen Seeds, "the high that is experienced from hashish is known to be more mentally fine and clear, and depending upon how much is ingested, definitely more intense."

Different forms of marijuana consumption come with different sets of risks and benefits. If you live in a state where it's legal and you're looking for instantaneous stress or pain relief, smoking or vaping is ideal. However, if you're looking for the longest-lasting pain relief, and you use marijuana frequently, you might want to consider consuming edibles. Wax is to be used with more caution than any other form of marijuana consumption; and hash is fun, but it isn't the easiest thing to make. Whatever form of cannabis consumption you decide to try next though, be safe, pay attention to what your body is telling you, and stay hydrated.