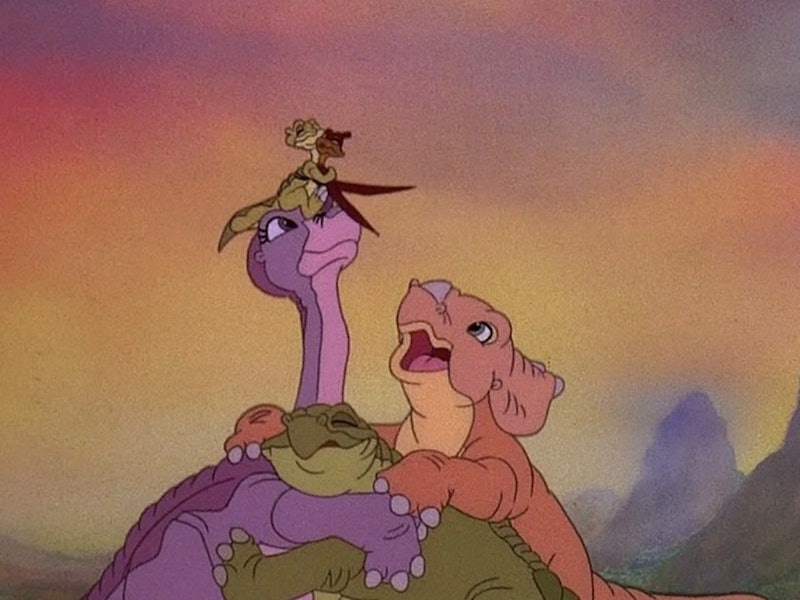 Confession: I am the biggest fan of Disney movies. Seriously, only take me on in Disney Trivial Pursuit if you want to lose your engagement ring and 5000 dollars. That being said, I can admit that The Land Before Time was the one kids' franchise that takes a giant meteor to Disney movies and makes them go the way of the dinosaur. Even with 10 billion movies that admittedly got a little ridiculous (how many adventures can one longneck get into?) The Land Before Time continues to defy the tests of time. The characters of Littlefoot, Cera, Ducky, Petrie, and Spike were the perfect friends for a young child to see, and their zest for life (in the face of what we all knew was imminent death and extinction) was so happy and hopeful. It was impossible not to love these movies.

Yes, Disney movies are great, but they got nothing on the wonder and joy that came from The Land Before Time and its many sequels. For one thing, who can forget how delicious these films made leaves look? I really am not sure I would have gotten as into salad as a child if I hadn't eaten it by pretending to be an omnivorous dinosaur. Those dinos changed lives, and the following seven reasons prove why The Land Before Time series trumps any Disney movie out there.

Practically every Disney movie features an orphan or someone with only one parent. Yeah, Littlefoot's mother and father were gone, but he still had two solid parental figures in his grandparents, who loved him deeply. The movies didn't gloss over death — the passing of Littlefoot's mother was heartbreaking — but it featured a change from the typical animated movie family structure.

2. It Passed The Bechdel Test

How many Disney movies can say that? Cera and Ducky were two strong, young ladies who had much to talk about besides boys.

Dinosaurs are really freaking cool so it stands to reason that movies about them are the coolest. Disney tried to make a movie about the creatures with Dinosaur, but the result wasn't that exciting. Then there was The Good Dinosaur, but again, nothing special. The only true dinosaur-themed kids' movies in my heart are from the '90s, yo.

4. There Were No Songs To Get Stuck In Your Head

This one's for the parents. The Land Before Time films had excellent scores, but no "Let it Go" or "Heigh Ho" to be played over and over again in the car on the way to ballet class.

5. You Learned A Lot

How many Disney movies provide even remotely historical facts? I mean, have you seen Pocahontas? Meanwhile, The Land Before Time taught many kids about the looks, eating habits, and other characteristics of their prehistoric pals.

In Disney movies, characters pretty much stay with other characters that look like them or fit into their world. Ducky, a "Big-Mouth," turned that notion on its head by taking in Spike, an orphaned "Spiketail."

7. The Entire Series Was Pretty Good

Sequels to Disney movies are usually not the best (I'm looking at you, The Little Mermaid II: Return to the Sea). And maybe The Land Before Time franchise went a little far with 14 movies and a television show, but I can at least say that the first four films were good — which is more than I can say about Mulan II.

Overall, Disney is still the reigning queen supreme in my eyes; I just can't help but love that weird little high-pitched mouse. However, there was a time when dinosaurs ruled the animated world, and what a time it was. Thank goodness there are still some stores that sell DVDs out there, so I can revisit the greatness of The Land Before Time series.

More like this
Rupert Grint Just Shared A *Major* Update About Ron Weasley’s Future
By El Hunt
Anne Hathaway Shared A "Thrilling" 'Princess Diaries 3' Update
By Darshita Goyal
12 Years Ago, Austin Butler Manifested His Oscar Nom In This Disney Movie Scene
By Jake Viswanath
Hilary Duff Is “Optimistic” About A 'Lizzie McGuire' Reboot
By Alyssa Lapid
Get Even More From Bustle — Sign Up For The Newsletter
From hair trends to relationship advice, our daily newsletter has everything you need to sound like a person who’s on TikTok, even if you aren’t.