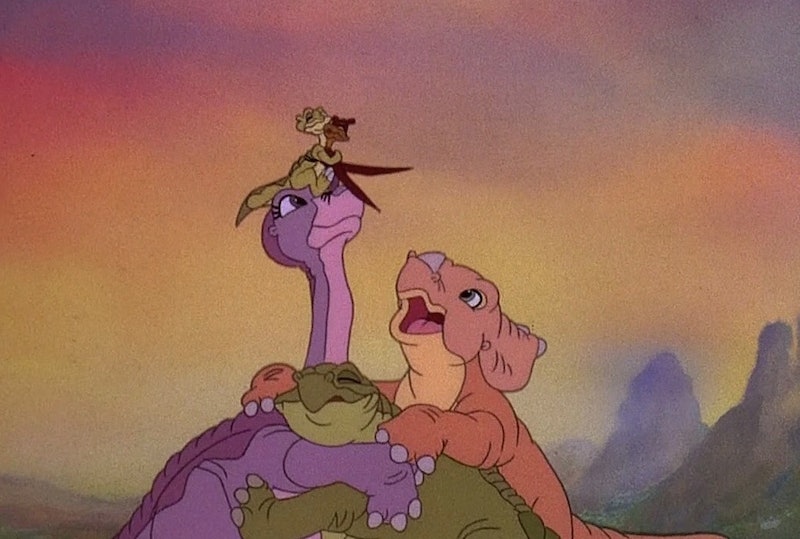 I know Disney movies are basically sacred. They are so deeply ingrained into the cultural psyche, nearly everyone has a favorite — myself included. That said, the good folks at Disney are not the lone creators of animated films. In fact, your childhood was probably defined just as much by non-Disney animated films as it was by The Lion King or Aladdin. From The Land Before Time to Fern Gully, there are plenty of amazing cartoon movies with unforgettable characters that I grew up loving just as much as anything that had the Disney seal of approval on it — sometimes even more.

Outside the realm of Disney, the movies of my childhood tackled deforestation, death, moving, and the threat of extinction. They took me to strange lands and introduced me to princesses who were way more complicated than Cinderella. They also made me care an alarming amount about an adorable mouse (Fieval fan for life) and occasionally scared me more than was probably healthy. I suspect the same goes for you. Prepare for a major (animated) blast from the past because these movies did not have to come from the minds of Disney's creative team to leave a lasting impression on your heart.

If you don't vividly recall bawling your eyes out when Littlefoot's mom dies, then clearly your parents sheltered you from cinematic pain. They also made you miss out on a beautifully crafted movie about overcoming prejudice and forming strong bonds that will carry you through life's hardest moments. It turns out Longnecks talk to Three Horns after all.

Fievel will always be one of my all-time favorite movie characters. The little guy flees Europe with his family for a new life in America, only to be washed overboard during the boat ride — leaving his family to believe he's dead. His quest to reunite with his family and find his way in a strange new land is harrowing. The themes may have been lost on you when you were a kid, but An American Tail is astounding — and yes, the "Somewhere Out There" scene will still make you super emotional.

The Incredibles' Brad Bird is behind the masterpiece that is The Iron Giant. It is impossible to forget the Giant who becomes a hero because everyone gets to choose who they want to be. Shut up, you're crying, I'm stoically appreciating the beautiful friendship between a boy and a robot, and not at all thinking about how the robot sacrifices everything to save a town.

Everything I know about environmentalism I learned from this movie (and Captain Planet). Anyone who saw this movie as a kid grew up with strong feelings about deforestation because the forest is where Batty and the fairies live. Do adults hold nothing sacred?

Watching The Last Unicorn as a child was frankly a terrifying experience. Everything about the movie from its tone to the fear that the Unicorn would never return to her true form and that accursed Red Bull left me shaking in my footie pajamas. It is a bonding experience though, because all you have to do is mention this movie to someone who was born in the '80s or '90s, and you will end up in an heated discussion about what was the most disturbing part.

This movie is why you named so many of your pets Charlie. (You know you did.) The story of a dog trying to make up for his mistakes on Earth to earn his place in Heaven, and the orphan girl who believes in him with all her heart hit my animal-loving heart hard when I was kid. For any kid who watched this movie, Charlie's story forced them to face their own pet's mortality. That part wasn't fun, but all the pizza scenes were.

If you already loved books as a child, then The Pagemaster was surely one of your favorite movies. The movie took its young protagonist (Macaulay Culkin) into an animated world where books and literary characters came to life. Book lovers of all ages were entranced by this one.

As heroines go, Anastasia is one of my favorites. She was a princess who lived a hard life and held her own with two con men. Additionally, Anastasia was extremely progressive, and didn't let her royal blood dictate her life — even when she discovered the truth about her heritage.

Mrs. Brisby was the ultimate mom, and her determination and fortitude to save her children and her home totally made me appreciate my mom more. If you haven't seen this movie since you were little, I highly recommend a rewatch because it is on the verge of becoming a forgotten classic, and that just won't do.

The Secrets of NIMH

Watching the oldest movie on this list has been a rite of passage for children for several decades now. This movie endures because it teaches you about life, death, and seeing the exceptional in the mundane. The first time you watched may very well have been the first time you felt your heart break.

Chanticleer made the sun shine, and melted your tiny, kid heart in the process. Who wouldn't love a powerful, Elvis-inspired rooster to root for? I rest my case.

It is important to remember all the movies that helped shape your young mind — even if most of them were really heartbreaking in the best way possible.