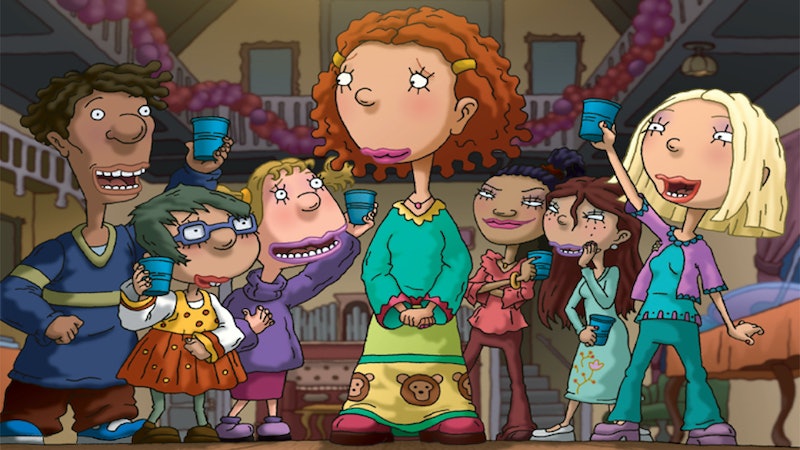 The '90s and '00s revivals just keep on coming, but this latest return of a beloved show is going to have cartoon fans flipping out (in a good way, I promise). According to Movie Pilot, Nickelodeon is bringing back As Told by Ginger. The series, which followed the middle school struggles of Ginger Foutley, aired for three seasons from 2000-2003 and earned three Emmy nominations for its progressive storytelling. Now Nickelodeon reportedly wants to pick up Ginger's story where it left off: with Ginger and friends entering high school. Commence your squeeing now.

Update: a Nickelodeon rep confirmed that there are no "immediate plans" for an As Told by Ginger reboot "at this time," and that the original report that a reboot was in the works has "no validity."

The As Told by Ginger revival is reportedly set to premiere in 2017, but don't despair because it is going to be worth the wait. MoviePilot claims that series creator Emily Kapnek will once again helm the series as Ginger navigates the complicated world of high school. Since Nickelodeon is angling to draw in their key demographic of tweens who won't have built in nostalgia for Ginger and her pals, there will be some tweaks to the character designs and updates for modern audiences. Fans of the original series shouldn't be worried about Ginger's past experiences being erased, though. With Kapnek on board, this potential revival is in the best possible hands.

New fans are in for a special experience meeting Ginger for the first time. As anyone who saw the show's original run can attest, As Told by Ginger was a brave series. Character death, emotional breakups, and young people facing serious consequences for their actions were all routine events. Furthermore, the characters aged and changed outfits — something incredibly rare for animated shows. As Told by Ginger was all about continuity and growing up with its viewers.

If you are an old school fan, then you are now going to be much older than Ginger, but don't let that dampen your excitement for what has the potential to be the greatest reboot of them all. You will finally get to see what happens between Darren and Ginger, you get to see what lengths Dodie and Macie will go to in their continued quest for popularity, and you will get to see little Carl all grown up. Did you ever think that would happen? Because I didn't, but now that it is happening I want to hug Nickelodeon.

Just in case you forgot, this news comes just a few months after Nickelodeon announced a Hey Arnold movie is in the works (the excitement is strong with this one). Nickelodeon is making a serious effort to revive old properties for new audiences and nostalgic '90s and early '00s fans. As Told By Ginger won't be the last show to return to Nickelodeon if the network's new executive Chris Viscardi (crearor of Pete and Pete!) has anything to say about it.

For now though prepare to welcome the amazing Ginger back into your life. I know I can't wait to see what she's been up to and how much she's digging the 21st Century. She's definitely on Tumblr, guys.