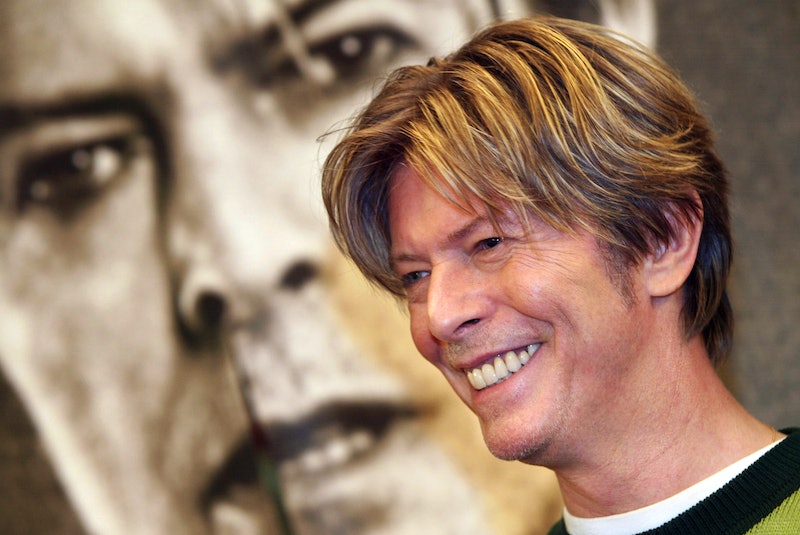 There's so much to grapple with in the wake of David Bowie's tragic death on Jan. 10 that I truly don't know where to start. But the thing I keep coming back to is the fact that he put out an album two days before his death, which is beyond heartbreaking, and makes me wonder whether it contained any clues to his condition. Specifically, what I'm wondering is what does Blackstar mean? It's the title Bowie chose for his 27th studio album, released Jan. 8, 2016, and I'm desperate for it to give me any kind of connection to the ordeal that Bowie was suffering through in the months leading up to his death. I was truly blindsided by his death — I don't even know that I knew Bowie was fighting cancer — I'm really grasping at something to make sense of all this for me.

Sadly, I think I have to accept that I'm not going to get any satisfying answers about the provenance of this album title, because, like all things David Bowie, he seems to have chosen it simply because he liked it. For no good reason at all, which is very Bowie, and I love it a lot. Previously, people speculated that Blackstar might have a connection to ISIS, after saxophonist Donny McCaslin, who worked with Bowie on the album's title track, told them as much in Rolling Stone : "He told me it was about ISIS. It's just an unbelievable tune." However, a spokesperson for the late singer denied the connection, telling the Mirror, "Blackstar is not about the Middle East situation."

There are also potential connections to references in fields from physics to occult mythology to the planet Saturn, and even a British amplifier company, all cited on Rap Genius , and even to a cancerous tumor, which is what jumped out to me originally. However, I think we have to make peace with the fact that there may not be a hidden meaning in the album's title.

Blackstar is what we want it to be; like most everything Bowie ever created, it is about nothing in particular, which means any thoughts or feelings it inspires in you are fair game. He was endlessly generous with us in that way, so let's take the meaninglessness of the title Blackstar as the gift that it is, and find our own meaning in these tragic times.