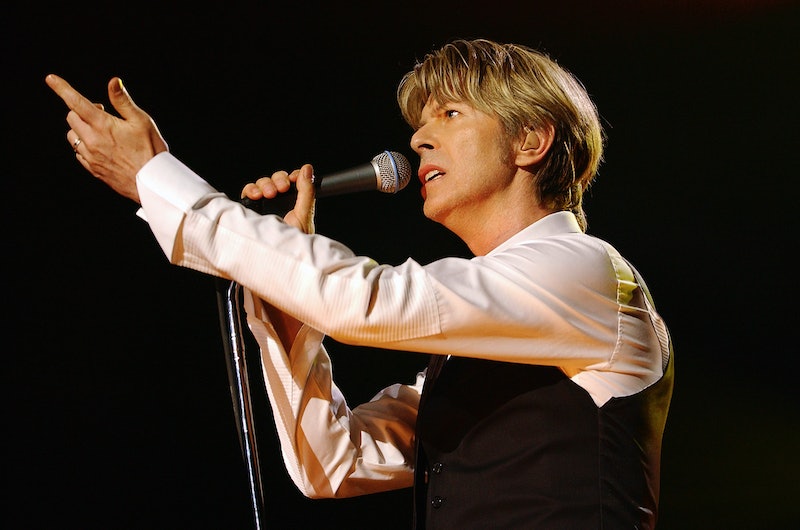 Knowing that only two days before David Bowie would pass away at age 69, he released an album, Blackstar (stylized as a simple symbol of a black star), is a comforting, yet eerie thought. I didn't realize it until we lost him, but I'd always imagined that Bowie simply couldn't die — he was so freaky, so celestial, that nothing could touch him in my mind. And in a way, the fact that he left us with this final musical word almost cements that he hasn't truly left and that he never will. The flip side, of course, is that Blackstar is all full of lyrics certain to make Bowie fans tear up so soon after the news of the musician losing his 18 month battle with cancer. Blackstar's lyrics are extremely open about death and dying, with one lyric in particular standing out above all.

Look up here, I'm in heaven

I've got scars that can't be seen

I've got drama, can't be stolen

Everybody knows me now

The entire first verse of "Lazarus," a song from Blackstar, likely seemed highly interpretive when the album was released on Jan. 8 (Bowie's birthday). The song has obvious connections to Saint Lazarus from the bible, whose sisters told Jesus that Lazarus was ill. Jesus waits two days, Lazarus dies, then, famously, "Jesus wept." Jesus then resurrects Lazarus, who becomes the vehicle for many to start believing in Jesus. Bowie, who was no stranger to religious imagery in his songs, almost certainly named the song with this Bible story in mind.

But now, knowing that Bowie was fighting a rather secret battle with cancer (scars that can't be seen) and that keeping his battle from the public eye until the end could account for the "drama" that "can't be stolen," it all seems so much clearer and more heartbreaking now. The lyric "everybody knows me now" is almost soul crushing, because it predicts the moment at which the world found out the truth that Bowie had been suffering and that his soul had left this earth.

It also makes this song far more personal than fans originally thought. In a way, this is comforting. It's almost as if his fans were able have a heart to heart with their idol before he left them. But in the face of loss, it can't make this song, or Blackstar for that matter, any easier to listen to.