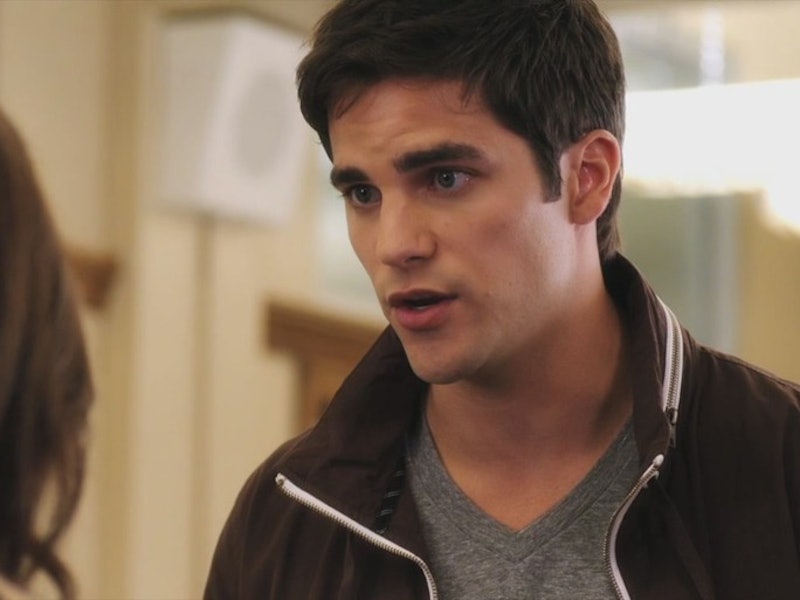 Throughout the past six seasons, Pretty Little Liars has taught us not to trust anyone. It doesn't matter how innocent they may appear to be on the series, chances are that every single character has something to hide. (Hence the title, Pretty Little LIARS.) So you can imagine how difficult it is to try and predict the new villain coming to PLL Season 6B. Now that A has officially been unmasked, there's a new Big Bad in town when the show picks up five years later, which means we're right back where we started: knowing absolutely nothing. Anyone could be the new looming threat. However, if I had to venture a guess, I'd say that Noel Kahn is the mysterious "B" on PLL we've been hearing so much about.

Thanks to a brief flash forward in the PLL Season 6A finale, fans know that someone is targeting Ali once again because clearly this girl is a magnet for trouble. And while the person's identity has yet to be revealed, the girls said that "he" was coming for her. So what makes me think that Noel is the "he" in question? Well, considering that he has always been super shady and was, in fact, a top A suspect in the past, I'd say he's more than capable of filling those Uber A shoes.

For starters, he already has a deep understanding and knowledge of the Liars' history. Whoever this "B" person is, they'll have to know these girls inside and out. And while I'm aware that the internet makes stalker research a lot less difficult, I wouldn't put it past I. Marlene King to make this new threat be someone we already know. Someone who would already have a vendetta against the Liars. Noel is no stranger to keeping secrets and pulling off major stealth skills. (Remember when he helped hide Alison?) Perhaps something happened that made him want to start using those talents for evil against the girls. Maybe something like experiencing a devastating loss.

When the new PLL poster was released, theories began swirling as to who could potentially be inside of the casket the Liars are carrying around. Some believe it was meant to be purely metaphorical, while others thought it foreshadowed an actual death of someone. And given the sunglasses all the Liars were wearing, many came to the conclusion that the person was Jenna aka, Noel's former girlfriend. We never really got a full understand of what their relationship was like, but what if his feelings for her were actually genuine? If he felt the Liars were in any way responsible for her death, it's more than possible that he decided to take up the A mantle and avenge his former flame's death.

Let's not forget that Noel also shared strong ties to Charlotte back when she was pretending to be CeCe Drake. (She used to hang out with his brother Eric a lot.) Maybe he was more in on her big secret than we ever knew and plans to finish the vendetta she started so long ago. This guy has proven more than once that he doesn't cower in the face of danger. If anything, he runs toward it and makes him the perfect culprit for any future crimes. He may not have been A, but that by no means makes him innocent.

For more PLL theories, check out Bustle's latests podcasts below: