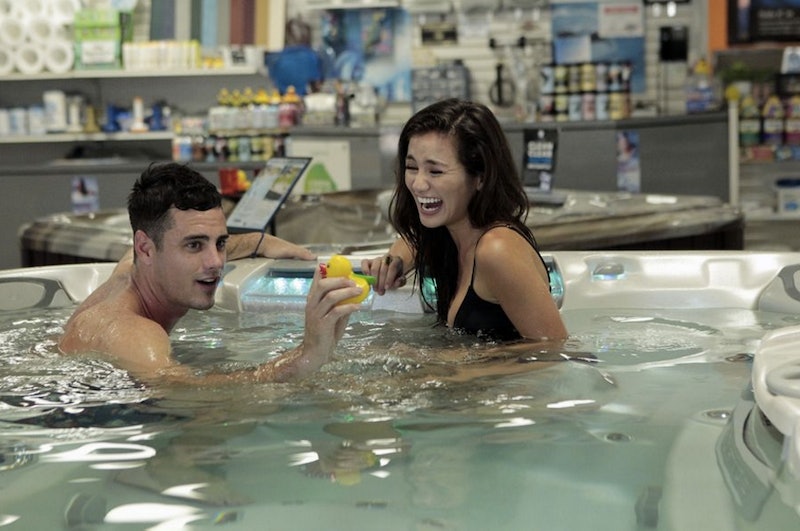 The women on The Bachelor are pretty serious about being on this show. In fact, a lot of them were enthralled with Ben Higgins before they actually had a chance to meet them. One of those women is Bachelor contestant Caila Quinn who admitted that she broke up with her boyfriend when she was cast on the show. So, she was in a relationship and applied to be a contestant on The Bachelor? That's interesting. But on the bright side, at least she broke up with this dude before the show filmed instead of him having to find out about this along with the rest of America. But, who is Caila Quinn's ex-boyfriend?

I consider myself to be an expert social media sleuth, and I am having a lot of trouble coming up with a definitive answer on this one. All I really know so far is that there is Internet speculation that Caila broke up with the guy in July. I checked out her Instagram and the recent posts are pretty clean of any recent relationship evidence and her Twitter is borderline abandoned, so who is this ex?!

No one really seems to know — yet! — but if you creep back far enough, there's one guy who was in a lot of Caila's Instagrams and they sure do seem like a couple in the photos. It appears that a guy named Ricky Knapp might be Caila's ex. But was that the same recent ex who she dumped or was he from a couple relationships back? Did she wipe all the recent photos with her last ex off of her social media before she went to film the show? Hopefully, Caila will provide some answers as this season of The Bachelor goes on. For now, if you are at least curious about one of her ex-boyfriends, even if he's not the ex-boyfriend, check him out below.

Like I said, the evidence here is not solid, but Ricky Knapp is the man who appears the a lot of her Instagrams. So, is this guy her ex or is he actually just a friend as stated in the caption? Maybe they became more than friends after this?

A Special Spot In The Pic Stitch

Why not just post the group photo if everyone in it was on equal footing as friends? The separate part devoted to a coupley looking photo is making me assume these two dated at some point.

"This Guy" In The Caption

Everyone knows that when someone uses the phrase "this guy" in a photo caption that it is almost always referring to a boyfriend. Case in point, this date looking photo of the possible exes.

Caila posted a photo from this party on Instagram with a group of friends that included Ricky, so why would she post a separate one of just the two of them? Could it be because they were dating at the time? It's possible!

Obviously, I went into this snoop session with some confirmation bias. I wanted to find Caila's ex-boyfriend, but did I properly identify him? We'll have to see if she reveals more. At the very least I found someone very important in her life, whether he was an ex or a BFF. At least we know something about her, right?