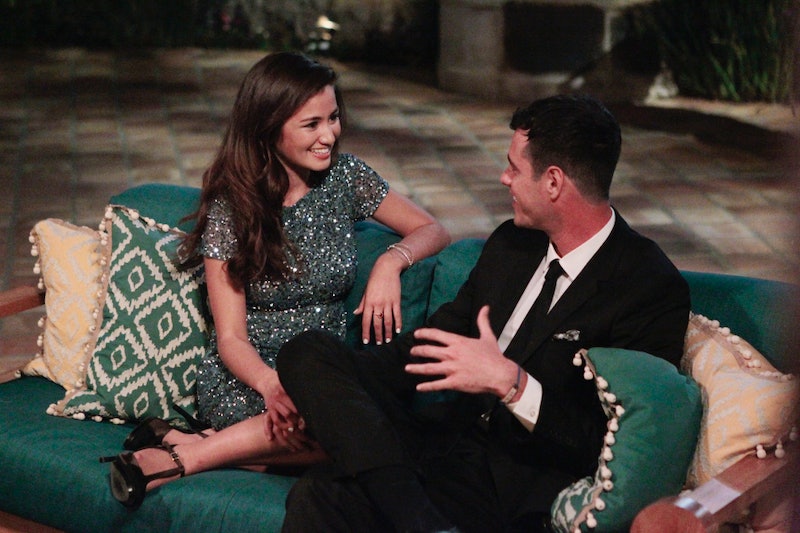 Another year down means that another season of The Bachelor is about to begin. Season 20 of The Bachelor will premiere Monday, Jan. 4 at 8 p.m. ET on ABC, but over these past few weeks, you've had plenty of time to study this installment's cast members to weed out the ladies who will just make good TV from those that will actually end up being good matches for Ben Higgins. With 28 bachelorettes entering the mansion initially, that's a tall order, but once you find out who contestant Caila Quinn is, she's sure to make a good impression on you — and hopefully Ben, too.

Sure, you shouldn't judge a book by its cover and all that jazz, but just by looking at Caila, she seems like someone who'd be pleasant to be around. I mean, look at that giant grin of hers in the above photo. How can you not love a jovial demeanor like that?

This may be a naive statement, but I'm going to hold onto my high hopes that Ben will be looking for someone he can connect with on a much deeper level beyond looks to take home the final rose this season. Lucky for Ben, Caila really does seem to be the total package.

She's The Girl Next Door With An Edge

Though The Bachelor tends to cast women that are genuinely looking for love, there's always a few eccentric characters that seem to appear on the show just to give the audience a good laugh at the beginning (free spirit Lucy, anyone?). Luckily, Caila seems to fall into the former category. Having not seen any of Season 20 of The Bachelor yet, I of course can't say that for sure, but everything about the 24-year-old software sales rep originally from Hudson, Ohio as seen in her official show bio just screams normal. However, she does seem to have a bit of a romantic edge, such as her preference for cold weather "because you get to cuddle up close" and love of Game of Thrones for its "deep plot and sexy tension." All in all, Caila seems sweet and sassy.

Caila earned a degree in marketing from the prestigious Boston College. But even before beginning her job at the Dedham, Mass.-based retail software company Reflexis upon graduating in 2014, Caila was trying to get ahead in her career. Caila had internships all throughout college working at places like New Balance, TJX, and within a corporate hospitality venue during the 2012 Summer Olympics in London, according to her LinkedIn page. Appearing on The Bachelor must have been a part of Caila's five-year plan.

She's A Part Of The Bachelor Nation

Caila may have a leg up on the competition this season of The Bachelor because she's been studying the show for quite some time as a fan. She even posted a photo on Instagram a few years ago praising Season 8 Bachelorette Emily Maynard and her love for then-fiance Jef Holm. I just hope Caila is really looking for love as an upcoming contestant on The Bachelor and not just hoping to fulfill a longtime dream.

She Already Has A Love Of Her Life

Caila's heart has already been stolen... by her too-cute Yorkie puppy named Pasha. Let's just say Ben better love dogs, or this relationship is probably not going to happen.

Caila is a girl-on-the-go in more ways than one. Not only is staying fit important to Caila, but she's also helped other people see the light as a fitness instructor. She's also been known to try her hand at more extreme sports, such as snowboarding and also wakeboarding. Good luck keeping up with this badass chick, Ben.

But She Also Loves Food

As much as Caila likes to stay active, girl also likes to eat. Just take a gander at her Instagram profile, and you will feel so much food envy over all of the treats she's actually been able to eat and we only get the pleasure of staring at.

She Has A Girl Crush On Lea Michele

Caila has a board on her Pinterest profile titled "My girl crush," and it's mostly filled with photos of Lea Michele. With the board's subtitle "Hair & Beauty done well," it seems like Caila admires Lea's look in particular. Come to think of it, Caila actually kind of looks like the Glee and Scream Queens star. Let's just say that if Ben digs Caila, he'd probably got a crush on Lea, too.

But in all seriousness, Ben's going to need to like Caila for Caila if he wants to have a lasting relationship with her. With everything that she's got going on, that shouldn't be too hard.