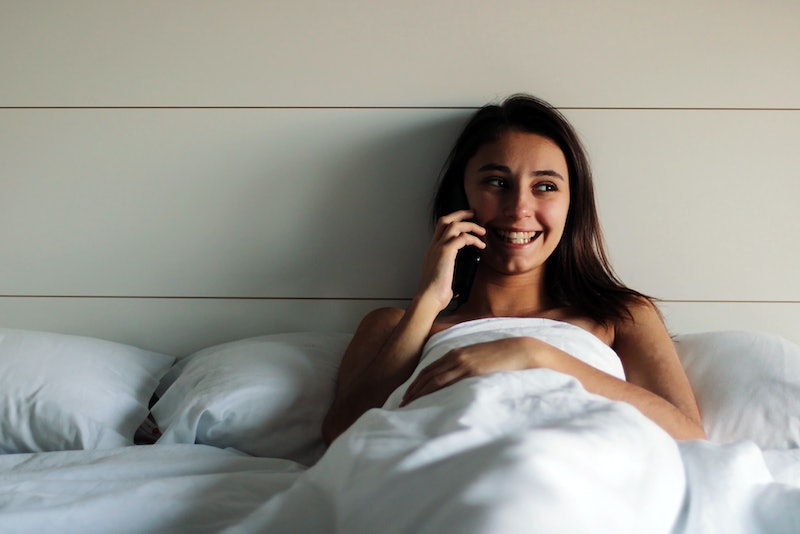 When you're hanging with your best friend, you're bound to get into a lengthy gab-sesh that covers a plethora of juicy topics. But the things that best friends talk about at 3 a.m., are quite different than the things they might talk about, say at 3 p.m. over a late lunch. When you're up late at night, whether you've been drinking or getting high off gossip, your walls begin to crumble. Maybe at some point you had some social boundaries or good sense not to talk about the craziest thoughts in your head with others, but at 3 a.m., the conversation starts turning and phrases are welcome that begin with "I know this is crazy, but—" and "Don't judge me, but—" and " OK, swear you won't repeat this?" and that's when the good stuff gets flowing. And once you break that seal, the logorrhea don't stop.

What began as a conversation about Obama's sexy salt and pepper hair became a conversation about a post you read on Reddit about how Obama is actually a reptilian and how you know someone who knows someone who knows someone who works for the government who knows that reptilians are real and that Eisenhower was one, too. And then maybe you start talking in a hushed voice because you're concerned that merely mentioning the term "reptilian" might awaken them from down under and then you both stop what you're doing and look around the room, circumspect. "Did you hear something?"

Once you're talking about ancient aliens and sexy presidents, you know you're in a safe zone and you let your mouth take you on a wild and nonsensical journey into the night. The best thing about having these conversations with your bestie is that you realize you're not the only one with a laundry list of wacko thoughts you're too scared to mention during the daytime. Though you might not be able to look each other in the eye by morning, it's totally worth it to have these all-night talks. Nothing brings you closer together than deepest darkest secrets and text message analysis. These are a few topics that tend to come up in those late night hours:

If it's after 3 a.m., someone is bound to bring up a ghost story. You'll touch on everything from personal experiences in the middle of the night to your friend's friend's friend's ghost stories. You'll also become momentarily terrified after breaching the subject. One of you might suggest downloading an EVP app or pulling out a Ouija board but you'll probably decide to pass on both ideas.

Yes, everyone's seen something in the sky that didn't make much sense. You'll probably talk about what you've seen with your own eyes and look up a few crazy unexplainable YouTube videos. You'll decide that the government has a lot of explaining to do. But you won't want to think too hard about it, because it will start to freak you out.

Now a days it seems like every one is comfortable talking about "The Universe" as a sort of all-knowing and powerful spiritual being or source. If it's after 3 a.m., chances are you'll start giving each other pep talks that include references to "The Universe" and how it will take care of you and knows how hard you're working and will bring you your soulmate. Because "The Universe" is like God, Santa, The Toothfairy and Glenda – the good witch.

Women don't need to be pregnant to obsess over baby names. Hell, you don't even need to be in a relationship or want to have a baby to brainstorm. We just genuinely like to think of names. And you better believe that if we are dating someone, we're tacking that person's last name onto our baby names of the month. These days people are getting really creative with names, but back in the day I couldn't find a sleepover party that didn't have a Madison, Charlotte, Chloe, or Riley.

It's just what friends do. We read text messages from people we're interested in like we're trying out for the CIA. We consider word choice, tone, context, time sent, objective, intention, everything. A part of us enjoys this, or we wouldn't spend so much time doing it. It gives us piece of mind, I suppose.

You might have started the night saying that you're over your ex, but by the time 3 a.m. rolls around, the admissions start to bubble up. You're not exactly over them and it only took a few drinks and a little bit of exhaustion to make you confess.

We've all watched Zeitgeist, right? We've all got a few government conspiracies we've been waiting to talk about.

All of those deep dark family secrets we're great at harboring during the day seem to be impossible to keep on lock in the wee hours of the night. It starts with a mention of a family member and ends in lots of tears and gasps and pinky swearing.

9. Disgusting Things We've Gotten Away With

That time you successfully blamed a fart on someone else. Or that time you didn't shower for a week and used Febreze to hide it. Yeah, these are the things we admit to at 3 a.m.. And really, at this hour they're more like brags.

Why is Kylie always eating potatoes on Snapchat? Is Heidi OK? Why Chrissy so good at Twitter? What kind of zit cream do you think that is on Miley's face?