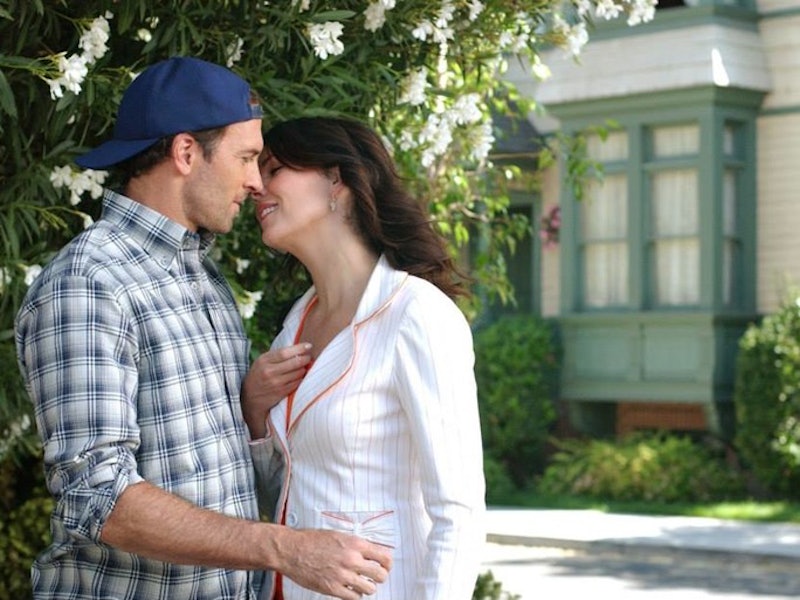 Realistically speaking, you've probably been making frequent "trips" to Stars Hollow recently to relive the magic of Rory and Jess. In fact, you're probably going to be up in arms if the two aren't endgame in the potential new Gilmore Girls Netflix revival. But let me tell you something, sunshine: while on paper, your Jess and Rorys, Luke and Lorelais, and Jackson and Sookies seem like total #relationshipgoals, a critical eye should inform you that Gilmore Girls relationships are totally unlike relationships in real life.

Which isn't a bad thing, because who turns to a quaint television Connecticut town for realism? Child, please. I'm just saying that, if you're looking at your current love life and wondering where all the white hot banter and yacht-stealing drama is, I think you need to put Gilmore Girls into perspective. But, hey, if you're too swept off your feet by a Jack Kerouac-reading rebel to do so, allow me to help take a step back and look at this critically. With all the love in the world for the show and its wacky and wild relationships, here is how romantic choices in Gilmore Girls stack up to the romantic realities of our lives.

The Fadeaway In Gilmore Girls

Sudden realization! There's no way you can get married to the cute (but by no means The One) teacher you're engaged to. I guess the only way we can resolve this is by jumping into a car and going on an impromptu road trip with your daughter. I'm sure the wedding details will just unravel themselves naturally (spoiler alert: nah).

The Fadeaway In Real Life

You never get to the point where you're about to get married. Instead, you have that gradual realization that there's no way you can date that cute guy you met on Tinder. You dodge his messages and hope that his unfounded attraction to you unravels itself naturally (spoiler alert: it usually does).

Having Merchant Crushes In Gilmore Girls

The entire town sees you as a romantic inevitability, and, initially, you try to suppress those feels. However, you steadily trade barbs over eight or so years, and he eventually comes to be the man you go to for support. One day, it hits both of you like a ton of bricks that you're madly in love and need to make this official. I guess the only thing that would put a roadblock in your relationship at this point would be, IDK, if he found out he had a secret 12-year-old lovechild.

Having Merchant Crushes In Real Life

There's one barista you think is super hot, but everything you say to him when you order your latte comes out in moron. Regardless, you spend every day for three months throwing down $5 for a drink, until, one morning ,you find him playing tonsil hockey with some chick with a septum piercing named Christa. You're pretty bummed, but they're such a cute couple and, after you switch to the Starbucks ten minutes away from you, you're able to move on with your life.

Oops, you lost your virginity to your married ex-boyfriend. I guess you should confront this like an adult, right? Nah, better plan: Let's go on a fun European trip with your loaded grandma until this blows over. It'll be like Gigi. And when you get back you can totally write a letter about the whole thing, and it'll be fiiiiiine.

Oops, you hooked up with your ex-boyfriend again. I guess you should confront this like an adult, right? Um, no, you're just going to avoid shows where his band is playing until this blows over. Or, more likely, until you drunk text him at 1 a.m. and start the whole process over again. Either way, don't worry, it'll be fiiiiiine.

OK so he causes a rift in your relationship with your mom, and that part isn't pretty. And, yeah, it was pretty sketchy when he abruptly left town... twice (so that's what that feels like). But he's your soulmate and intellectual equal, and you know that your inspiration will eventually lead to him to use up all that wonderful potential he so obviously has.

It was totally sketchy when he left town abruptly. Hearsay from mutual friends (i.e. Facebook) says he's out trying to make the band work still, but, as far as you can tell, he's just bartending in Minneapolis. He still owes you $500. Your new boyfriend gives you a lot less anxiety.

Never without excitement! How about three weddings in one day culminating with a concert and a White Stripes cake? Or a renaissance theme in the town square? Or, hey, why don't we just skip all that and elope in Paris?

Uh, your high school best friend had a Harry Potter-themed wedding, that was pretty cool. Other than that, weddings are clean, Pinterest-friendly affairs that involve frequent trips to the open bar and frequent replays of "The Way You Look Tonight" (including an EDM remix).

I guess no matter how you slice it, love is a crazy, hazy thing. Still, you can be thankful to the Gilmore Girls for making your own romantic mis-steps seem a little less dramatic.