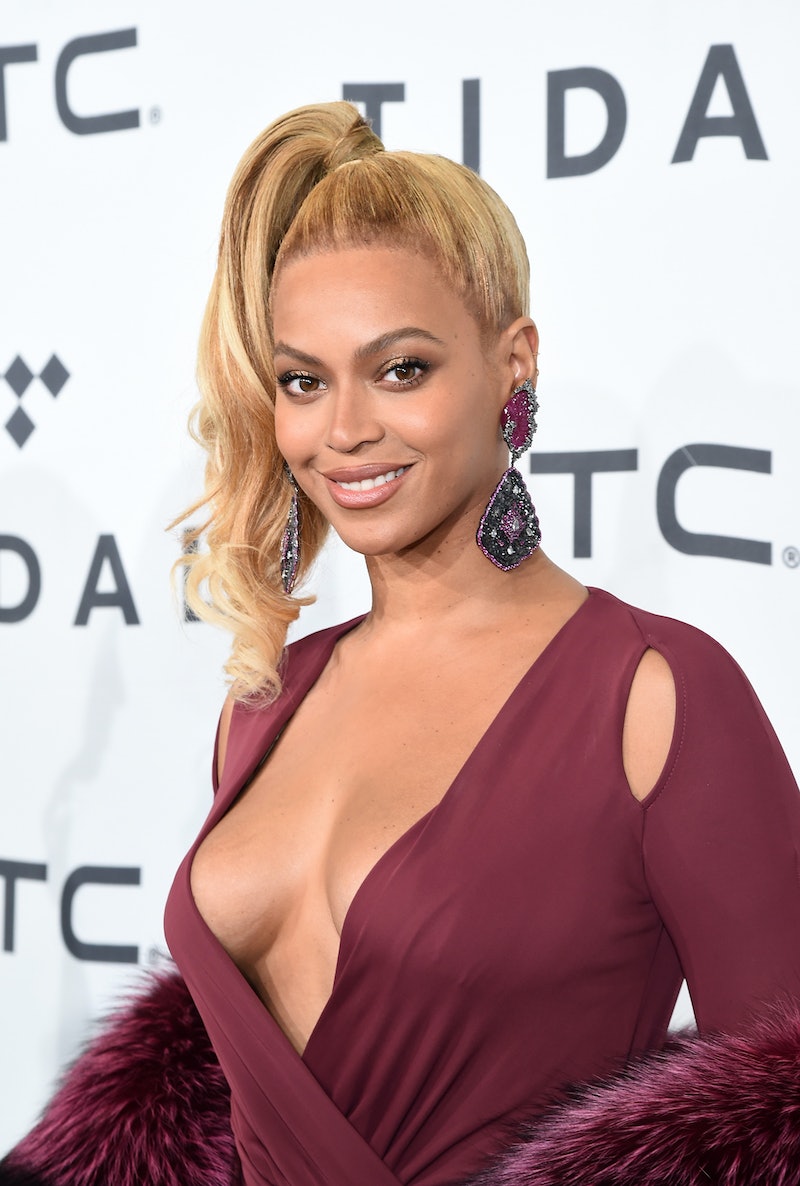 Another day, another celebrity pregnancy rumor, and this time, it's Queen Bey's turn. After some photos surfaced that may or may not show off a potential baby bump, word on the street is that Beyoncé is pregnant with baby number two. The singer has yet to comment on or confirm anything that has to do with these photos (Bustle has reached out for comment, but has not yet heard back), and I'm not buying into the hype until she does, especially since these kinds of rumors are so frequent. In fact, if we believed she was pregnant every single time a new rumor cropped up, she'd have been expecting her second child for a few years now — there are that many of them.

Because Beyoncé has the same problem Kate Middleton has: Everyone cares way too much about her uterus, despite the fact that it's actually nobody's business but her own. And since these reports are so insanely frequent, wouldn't it be interesting to see how many kids Beyoncé would have had by now if every pregnancy rumor was true? The effort it took to calculate the results was even more proof that these rumors are totally out of control. I started in 2012, the year Blue Ivy was born, and went all the way to the present. In those four years, Beyoncé had the potential to mother enough kids to warrant her own TLC reality show with how many new stories appeared every year.

And my final findings? If all of these rumors were true, Beyoncé would have 12 kids right now, including Blue Ivy. Bless her heart.

Apparently, Beyoncé was taking folic acid (which is typically used by pregnant moms) in June 2012, and according to Media TakeOut, she was already pregnant just four months after giving birth to Blue. I know that Beyoncé does things in a way more epic way than the rest of us, but even for her, that's fast.

As pointed out by The Huffington Post, Beyoncé looked a little bumpish in a tight fitting dress. Can we give this woman a break?

Reportedly, the reason Beyoncé dropped out of the Clint Eastwood remake was because she was pregnant. Not because their schedules didn't match up, which is what she actually said.

E! is usually a really reliable source, so it was surprising when their pregnancy announcement turned out not to be true. They even had extra evidence, like Beyoncé canceling a concert due to exhaustion, but as it turns out, it wasn't the pregnancy related kind.

5. She Told Her Friends She Was Pregnant In September 2014

According to a report from Hollywood Life, in the fall, Beyoncé began telling her friends and family about the baby she was expecting... except that baby never materialized.

Looks like Blue Ivy buried her mom with a strategic baby bump, right? Nope. And after she was rumored to be pregnant just a month before because of her loose clothing and reported drink questioning, it really seemed like it could be true.

While performing "Beach is Better" in Paris, Jay Z replaced the lyrics in the song to "pregnant with another one," leading everyone to believe that this was his way of announcing Beyoncé's pregnancy.

According to what sources told Hollywood Life, the couple searched high and low for the perfect surrogate before making their decision final, and in June, said surrogate was reportedly in the "early stages" of pregnancy.

Reportedly, sources close to the couple confirmed to Life & Style that Jay Z and Beyoncé used IVF to get pregnant, but didn't want to tell anyone until after they'd hit the three month mark. Being that happened six months ago, it's probably safe to say this rumor wasn't true, either.

This time, she was pregnant because she was "looking curvier" and carried her computer weird? OK.

11. She Looked Pregnant In A Mesh Bodysuit In October 2015

Let's be real: Anyone would look pregnant in a mesh bodysuit, so when Bey looked extra curvy on stage at the Global Citizens Music Festival, rumors ramped up yet again.

Whether the latest rumors are true and Beyoncé is actually pregnant again has yet to be seen, but this list is proof enough that you can't believe everything you read. I'll wait until she announces the news herself — hopefully in an even more exciting way than her 2011 VMA pregnancy announcement. 'Til then, maybe we should all just give her some space (and stop looking at her stomach).