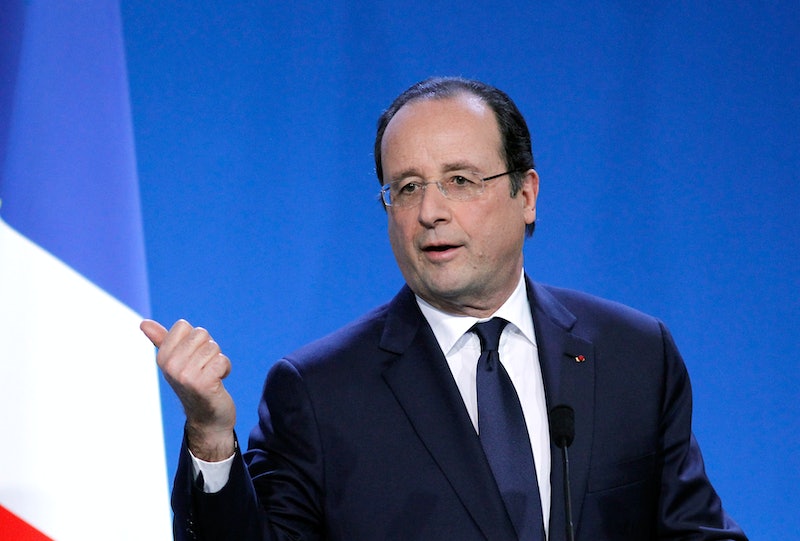 On January 10th, the French gossip magazine Closer reported that France’s quite unpopular, until-now-boring president Francois Hollande has been having an affair with the actress Julie Gayet. Following the news, Hollande’s partner and first lady, Valérie Trierweiler, had a breakdown that landed her in the hospital.

Once again we find ourselves engaging in the same debate: Why don’t the French seem to care about their politicians sex lives? Sylvie Kaufman reports in the New York Times that 77 percent of voters view his affair as “part of his right to privacy.”

New Yorker writer Adam Gopnick, who has lived in Paris, succinctly sums up the quintessential French view of sex: “Sex with children or by force is wrong, and the rest is just the human comedy, unfolding, as it will.” France, as Gopnick notes, is not a fundamentally puritanical society, unlike America. There is a rich and varied tradition of French presidents having illicit affairs, multiple mistresses, even multiple families. The much-revered Francois Mitterand had a daughter with his long-term mistress, to essentially no public outrage. Jacques Chirac's extramarital affairs made headlines around the world, but not so much in France.

This widely-accepted notion that the French don’t give a merde about their elected officials sex lives, however, may be changing. The first question at a recent policy-focused press conference, Slate columnist Joshua Keating points out, regarded Trierweiler and whether Hollande still considered her “first lady.” And Keating is correct to view the never-ending series of Sarkozy scandals, all of which made French headlines, as putting “the nail in the coffin of France’s former discretion toward its leaders’ peccadilloes.”

Economie Matin, a relatively serious news blog that covers the economy, politics, and current events, reported that Trierweiler trashed her partner’s presidential office in a maniac and vindictive fit—allegedly causing over 3 million dollars in damage — in what they’re now calling the “Trierweiler Incident.”

The story is juicy, and only getting juicier. The French seem to be experiencing an unprecedented level of delight and curiosity in the whole affair. The issue of Closer that printed the scoop, alongside pictures of Hollande outside Gayet’s apartment, sold out — all 600,000 copies. Economie Matin refers to the whole scandal as "Gayetgate," which is apparently trending on the French Twitter circuit.

Though they may hate themselves for it, but the French are starting to look a lot like us.