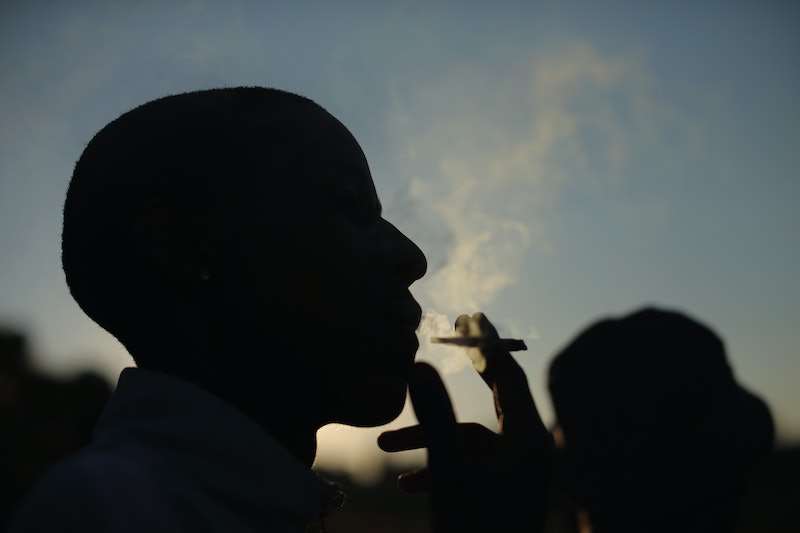 For those who like their mind-altering herbs sprayed with dangerous chemicals and sold to them in gas stations, there's always synthetic cannabis. The designer drug, branded as "herbal incense" or a "herbal smoking blend," is often sold in convenience stores and gas stations — and it's nothing like cannabis. Nicknamed "synthetic marijuana" because of its origins as a cheap, legal alternative to marijuana, a spat of new research has shown synthetic cannabis (also known as "K2" or "Spice") can prompt psychosis, both short and long-term. Worse? It's getting more dangerous, and it's not going anywhere.

This week, the University of Colorado published a medical study that suggested America should prepare itself for an increase in synthetic cannabis-related deaths and illnesses, both mental and physical. Last fall, emergency rooms saw a sharp uptake in people who had taken the drug and were suffering from seizures, irregular heart beats, strokes, and/or psychotic episodes. Even though the substance is technically banned — more on that in a minute — the Colorado study hinted that its popularity is increasing, even as another study recently indicated that teens were rejecting the drug. One in ten ER visitors who had taken the drug, according to the Colorado research, wound up on a ventilator.

So why would anyone smoke it, especially now? Well, first off, it's widely available. Even the White House grudgingly admits that it can still be found in many convenience stores, and it's packaged in hundreds of different varieties. It's designed to imitate the high of cannabis, so the drug markets itself as a store-available alternative — and if you get a safe batch, the intoxication is similar to a marijuana "high." "Herbal smoking blend" or "incense" don't sound like terrifying things to smoke, and they're cheaper, more accessible, and look superficially safer than authentic cannabis. You can walk down to the corner store, buy a pack, and light up. It's that easy.

Unfortunately, the haphazard, unregulated development of synthetic cannabis means that you could be getting pretty much anything. The term "synthetic cannabis" is used to describe any cannabinoid compounds, which are comprised of any kind of herbs mixed with any kind of chemical cannabinoids — and there are hundreds of different combinations for sale. They can contain anything from lavender to insecticides, and the ingredients usually aren't divulged on the packaging. And as you might imagine, the blend of haphazard chemicals and herbs can end pretty badly for the user.

Because there are so many forms of this drug, it's nearly impossible to predict what the effects might be. At first, synthetic cannabis was thought to be typically developed outside of the U.S., but was been recently found to be made in residential American neighborhoods as well. And the number of different "blends" are rapidly increasing: in 2009, just two were identified, and by 2012 experts had identified 158 different kinds of synthetic blends available.

In 2010, the White House issued an emergency order to make synthetic cannabis illegal, prompted by the worrying prevalence of the drug — branded as K2, Black Mamba, Spice, and God knows what else — in local stores. The drug is still being tested to determine whether it'll remain a Schedule 1 controlled substance permanently, and 43 states have independently banned it. Unfortunately, it's still available in many retail stores and on the Web, and is as popular as ever.

"People may not realize how dangerous these drugs can be," wrote the lead author in the Colorado study. "Up to 1,000 times stronger binding to cannabis receptors when compared to traditional marijuana...Synthetic marijuana is illegal under DEA law, but companies that make it are a step ahead with new chemicals and packaging on standby all the time."

In the last five years, noted the Colorado research, the drug has become more popular than ever. According to the New York Daily News, it's as easy to buy as aspirin. Synthetic cannabis been around since the early 2000s, but in 2008 it was discovered that synthetic pot wasn't herb-based, as was understood at the time. Since then, it's become less tolerated by the Feds – and, simultaneously, more widely used. And gradually, the medical community has understood it to be more and more dangerous, probably much more so than its oft-illegal "alternative," regular cannabis.

So what are the risks? Well, the link between synthetic pot and psychosis has been the most studied. Not only can the drug spark a psychotic episode, it can also be an extended and very frightening one — and the drug can even trigger full-blown psychosis in people whose family histories make them susceptible to the condition. And that's without going into the raised risk of heart attacks, seizures, breathing problems. Plus, that's what we know about the drug. The truth is, we know very little. One of the first professor to investigate the drug is quoted as saying: "People who use it are idiots...You don't know what it's going to do to you."

Seriously. If you have to get high legally, take a flight to Washington or Colorado and light up. Or wait a year, go to Illinois and trade in your Second Amendment right for the right to get high. It's got to be safer than this.

More like this
Every Single Big & Small Way You Can Fight For Abortion Rights
By Tess Garcia
How 5 People Upended Their Lives To Fight For Abortion Rights
By Hannah Smothers
This Dog Food Is Not Only Super Healthy For Your Pup, It’s Also Better For The Planet
By A. Graham
This TikTok Hard Seltzer Hack Involves A Milk Frother
By Alexis Morillo
Get Even More From Bustle — Sign Up For The Newsletter