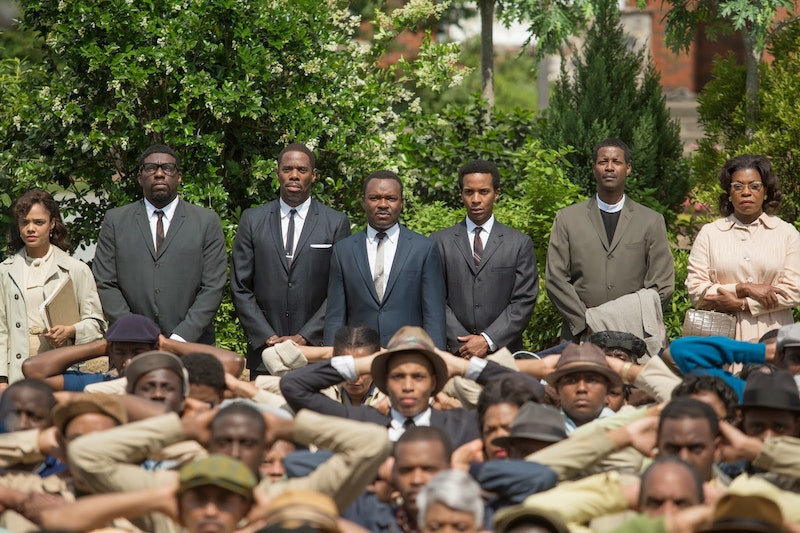 If you're upset about the Academy of Motion Picture Arts and Science's lack of love for Ava DuVernay's historical film Selma , take solace in the fact that you're not alone. The voting body has been under fire all morning since the nominations were announced for the 87th Annual Academy Awards for a series of inexplicable decisions. No Best Animated Feature nod for The Lego Movie ? No love for David Fincher's Gone Girl? No Best Picture nod for Foxcatcher? But by far the most egregious misstep that AMPAS made was largely ignoring what is not only one of the most important, but one of the best movies of the year.

Review aggregation site RottenTomatoes.com has Selma slotted at a whopping 99 percent. Out of the 145 reviews they have counted, only two were considered "rotten." That makes Selma the Best Picture nominee with the highest critical notices this year, just ahead of Boyhood at 98 percent, and far ahead of The Theory Of Everything and American Sniper, at 79 percent and 73 percent, respectively.

And yet, judging by the Oscar nominations, the year's best-reviewed movie apparently made itself. The only other nomination it received was in the Best Original Song category for Common and John Legend's "Glory." Nothing for director Ava DuVernay (who would have been the first black woman nominated in her category). Nothing for star David Oyelowo. Nothing for the screenplay. Nothing in any technical category.

With basically zero nominations backing it up, Selma's Best Picture nod feels more like a token inclusion as the year's "minority film" rather than any sort of recognition based on merit.

With DuVernay's and Oyelowo's snubs, this year's Oscars are the whitest in recent memory. All five director nominees are men: four are white, one is Latino. All 10 screenplay nominees are men: nine are white, one is the same Latino man nominated for Best Director. All 20 acting nominees are white — that's right, for the first time since 1998, not a single person of color made it into any of the Academy's acting categories. This fact bears repeating: It has been 17 years since the last time this happened.

There is one tiny silver lining on this ugly lack of diversity: People are furious about it. Here's just a tiny, tiny sampling of reactions culled from Twitter:

More like this
14 Women To Watch This Oscar Season
By Marina Watts
Stormzy Made A Passionate Speech About The Importance Of Diversity
By El Hunt
Pro Footballer Zander Murray Is "Blown Away" By Support After Coming Out
By Sam Ramsden
After 'Hocus Pocus 2', The Sanderson Sisters Are Coming to Broadway
By Radhika Menon
Get Even More From Bustle — Sign Up For The Newsletter