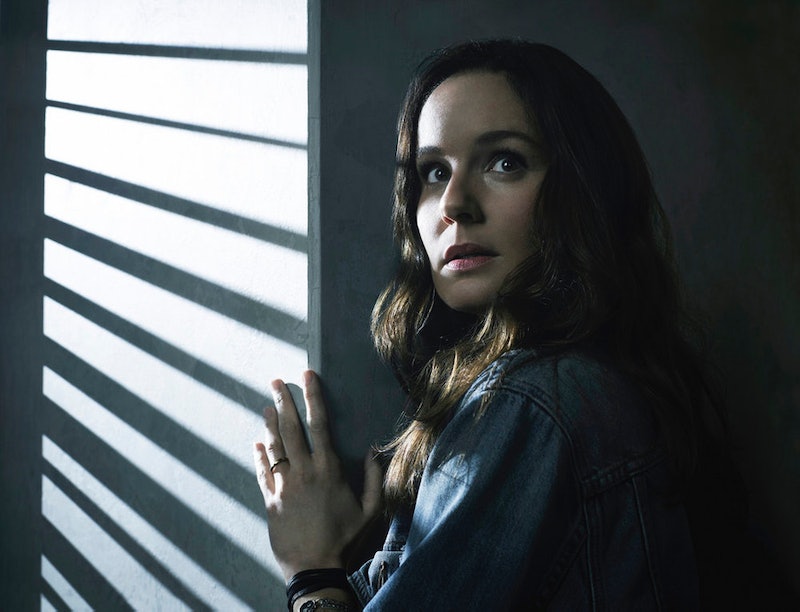 If you're missing ABC's The Whispers, don't worry — there is a new extraterrestrial drama coming to USA. From Lost's Carlton Cuse and Hercules' Ryan Condal, Colony takes place in Los Angeles, which also happens to be occupied by aliens. It focuses on the Bowman family, who are struggling to survive in a dangerous world, all while dealing with their own family issues. And Sarah Wayne Callies says Colony isn't your typical alien drama, which is all the more reason to tune in when the series premieres on USA Thursday night at 10 p.m.

"We are exploring the occupation, not the war," Callies tells Bustle in an interview. "Most stories about aliens are about the first day that they show up and what that's like. It's the arrival of the aliens and most other stories are about that kind of first contact. Our story picks up 10 months into the occupation. So, the shock and awe of it all has gone away and you're left with the daily attrition of the occupation."

If viewers were hoping to see something similar to Independence Day, it doesn't seem like that's going to happen, at least not in Season 1. But, that doesn't mean you shouldn't check it out, because Colony is taking a very different look at an alien invasion, which makes it even more intriguing. As Callies says, "For [the showrunners], I think this is much more of a show about what happens to human nature under the conditions of the occupation as opposed to let's make another alien show."

That definitely seems to be the case, because as Callies also notes, this is one drama that is looking to the audience to decipher things for themselves. "I think with this show they're relying on the audience to be really intelligent," the former Walking Dead star says. "This is not a show that dumbs things down or that over explains, but it is a show that takes on questions of civil liberties and occupations and freedom of speech," among many other topics.

Colony really is about the people and not the aliens, but that doesn't mean there won't be action scenes or fans theorizing about certain aspects of the series. As Callies explains, "It's a story about the people and the occupying force exists throughout the whole thing, but it's not in your face, which I think makes it when you do uncover pieces of information really exciting."

As for her character, Katie, it appears that she and her family are dealing with quite a lot as soon as the first episode opens. Katie and her husband, FBI Agent Will Bowman (played by Lost's Josh Holloway), are struggling with a family tragedy. One of their children was separated from them during the alien invasion, but both Katie and Will are going to do whatever it takes to bring him home. That said, they might go about it in different ways.

It seems like Katie and Will might no agree on how to go about it, which adds to the drama of the series. "They're at the point now that they just can't live with the situation the way it is anymore," she says. "So, they take action to change it, but they take very different kinds of actions. That's the sort of philosophical crux of the show. Do you choose resistance or do you choose collaboration?"