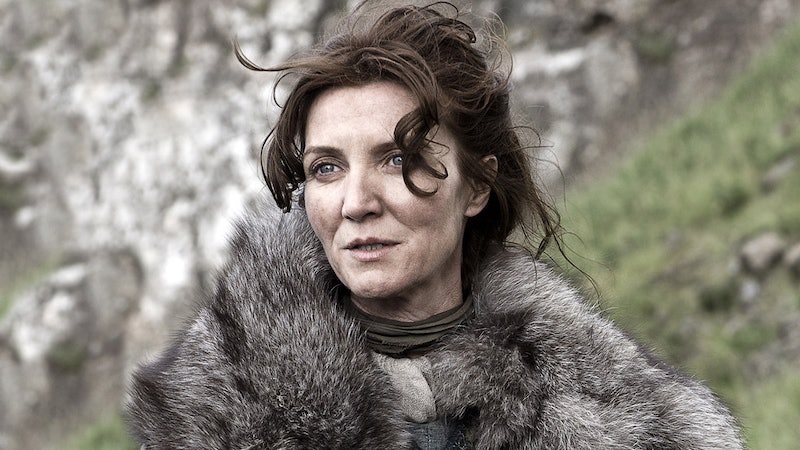 In a perfect Game Of Thrones universe, all the characters we love aren't dead and are just hanging out at their local TGI Fridays enjoying some happy hour cocktails. Or maybe, that's just my ideal Game Of Thrones universe — I just can't get enough of those chicken potstickers there, and I'm sure the Starks would agree. However, IRL, everyone we all loved on Game Of Thrones is dead. Ned Stark? Dead. Robb Stark? Dead. Jon Snow? Probably dead (but maybe not, right?). As devastating as each and every loss has been (I'm looking at you Red Wedding), they are necessary for the plot to go forward and for the amazing story we love so dearly to continue to be amazing and dearly loved. "You take the good, you take the bad, you take it all and there you have, the facts of life," as some great philosopher Gloria Loring once said.

But, what if that weren't the case? What if we lived in a brave world where, yeah sure, some of the people we all loved on GoT were still dead, but at least one of them wasn't. What if the Red Wedding had been more pinkish-toned, and Catelyn Stark had a harrowing escape scene over hill and dale? Imagine with me, if you will, the wonderful world that would be.

1. Arya Would Help Her Mother Escape

Arya was just outside of the castle where the Red Wedding took place — aka, when Catelyn died — but, if Catelyn had survived, she would've totally been there to aid in a rescue attempt. She is, after all, one supreme lady badasses in GoT.

You think Catelyn Stark is going to take the murder of her son, daughter-in-law, and grand-fetus lightly? Not likely.

3. She Would Mend Things With Jon Snow

Sure Catelyn once told Jon she wished he was the one who fell out a window. But, I'd imagine after the death of everyone close to her, she'd reevaluate her life and her feelings to bond with Mr. Snow.

4. Sansa Wouldn't Have So Many Issues

She'd maybe be relatively happy, even.

No offense meant to the dearly departed Ned Stark, but women definitely make better leaders than men. According to SCIENCE.

6. Catelyn Would Probably Marry Someone Gross

Like, IDK, Petyr Baelish. Plus side, then he wouldn't have married/murdered her sister.

7. She Would Most Likely Punch Jaime Lannister In The Face Again

A move we can all appreciate. No matter how much he redeems himself, he still pushed Bran out a window.

8. She Would Actually Be A Zombie

It's no secret that the series has left out "Lady Stoneheart," who is actually the zombiefied Catelyn Stark. If the gal actually came back, she would still be dead — but, you know, kinda alive in a White Walker sort of way.

9. She And The Tyrells Would Chill Hard

Ladies who aren't evil in Westeros need to stick together. Do I hear cries for a Olenna Tyrell and Catelyn Stark spinoff episode where they are just two girls trying to make a living in the big city? I think I do.

10. She And Her Brother And Uncle Would Have A Blissful, Vengeful Reunion

Bring it on Walder Frey, because Brynden (Catelyn's uncle) escaped the wedding. If Catelyn and Bry teamed up, they would rescue Edmure (Catelyn's brother) from the dungeon where Frey is keeping him and exact sweet, sweet revenge.

After kicking butt and reuniting with her family, Catelyn would enjoy a nice cup of tea and get out of the game. She's seen where it ends.

Alas, we don't live in the world where Catelyn Stark is still alive and kicking. We live in the one where most of the good guys are dead. So get your feels ready because winter is coming — and so is spring, when Game of Thrones graces HBO once more. (April, guys! April!)