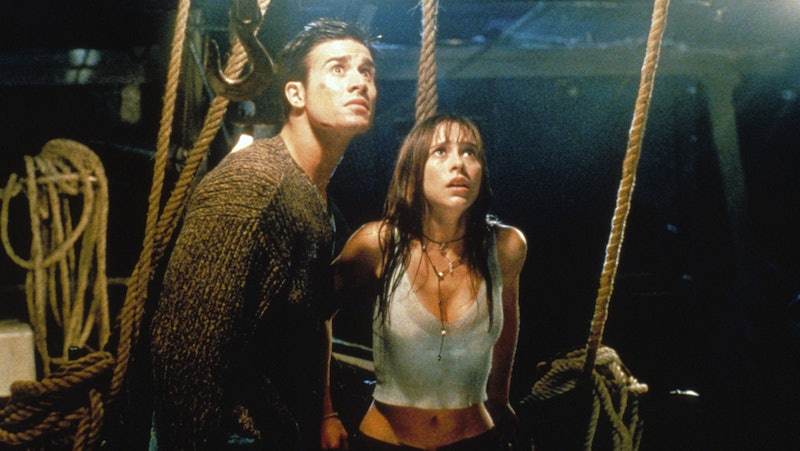 First impressions usually can’t be trusted. Even second, third, and fourth impressions are suspect, especially when it comes to the movies that my friends and I loved in the ‘90s. As a budding film geek and complete celebrity hound, I devoured movies throughout my childhood and talked about them incessantly with my pals. (That’s the pre-drinking age social life of a suburban kid. Staying in? Movies at home. Going out? Movies at a movie theater. Wash, rinse, repeat.) I knew what I liked and what I didn’t, but my tastes were still developing. I’ve grown as a viewer and hopefully as a person, and unfortunately that’s completely ruined a lot of movies that I once innocently and ignorantly loved. These ‘90s movies may be cringeworthy now, but they’ll always be a beloved (with an asterisk) part of my past.

Some of these films have lost their luster because the years have exposed them for being not as seminal as they once appeared. Others are so casually offensive in regards to race, gender, and orientation that they’d never get made today. And some have just always been terrible, only as a kid, I didn’t really mind. Below are 13 cringe-worthy movies from the ‘90s that honestly make me a little ashamed of myself.

This hurts me. I have this movie memorized. Jim Carrey was my hero. For about a solid month, I would watch Ace Ventura every single day when I got home from school. The stupid jokes stand up just fine, and Jim Carrey is an aggressive and tireless physical comedian. But the transphobic humor that supports the entire plot is downright appalling when viewing it from 2016.

It's just a found footage movie. That's all. A million of them have been made since. What was everyone so wild about?

Pre-Marvel Cinematic Universe, a big-time monster movie was a rarity to get excited about. But 1998's Godzilla was poorly executed dreck, from the preposterous dialogue to the objectionable Wallflowers cover of David Bowie's "Heroes" on the soundtrack.

If you thought it would be impossible to translate the Super Mario Bros universe from video game to movie screen, you thought correctly. John Leguizamo made a cute Luigi though.

Any time someone on Tumblr starts a post with the phrase, "Not to be fake-deep, but...", I think of American Beauty. Fake-deep was born when Wes Bentley spent an entire movie filming a dirty plastic bag floating in the breeze. It was a plastic bag. Those go in the cabinet under the sink, not in an Best Picture winner.

6. I Know What You Did Last Summer

'90s slasher films were a blessing as a whole. The Scream series in particular, give or take a couple of poor sequels, resurrected a genre with wit and style. But with the truly terrible performances turned in by the entire ensemble (led by Jennifer Love Hewitt), I Know What You Did Last Summer couldn't reach that upper echelon of trash.

Pay It Forward is the kind of emotionally manipulative garbage that awakes more of my cynicism the more sincere it pretends to be.

I can explain my repeated viewings of this schlocky '70s-set club drama with two words: Ryan Phillippe.

Jocks, cheerleaders, stripper teachers, "good girls," the fat kid...so many stereotypes get a work out in the teen football drama that I don't even know where to start. It's as if Friday Night Lights the series replaced its empathy with a whipped cream bikini. Great soundtrack, though.

How did this happen?

The moment when Casper descends the stairs in the form of Teen Beat mainstay Devin Sawa will stay with me forever. But everything that came before it (her boyfriend is a ghost, okay) is vaguely creepy and I can't forget that either.

I know, and I'm sorry. Tom Hanks is magnificent. The score is to die for. But overall, Forrest Gump is what the kids call "problematic." Jenny is a free spirit who sleeps around and gets punished for it by contracting AIDS. (She dies, but not before she can make amends for her liberation by conforming to a normal life.) Forrest's mom lives only to spout Southern-fried faux-wisdom at her son, and then she dies too. Bubba's stupidity is presented as some sort of charming quirk; troubling, since he's the film's token black character (before he dies, of course). And then there's Forrest, a character who could be read as being on the autistm spectrum and thus, is ambiguously magical. Let's agree to stop pretending that this movie is profound.

Bright side: without the movies that make you cringe, how would you be able to really appreciate the ones that don't?

More like this
The 'Hocus Pocus' Sequel Finally Has A Release Date & It Makes Total Sense
By Shannon Barbour and Radhika Menon
Alicia Silverstone Has Recreated An Iconic 'Clueless' Scene
By Frances Stewart
Everything To Know About 'Scream 6'
By Jack Irvin and Jake Viswanath
The 'Jurassic Park' Cast, Then & Now
By Arya Roshanian
Get Even More From Bustle — Sign Up For The Newsletter