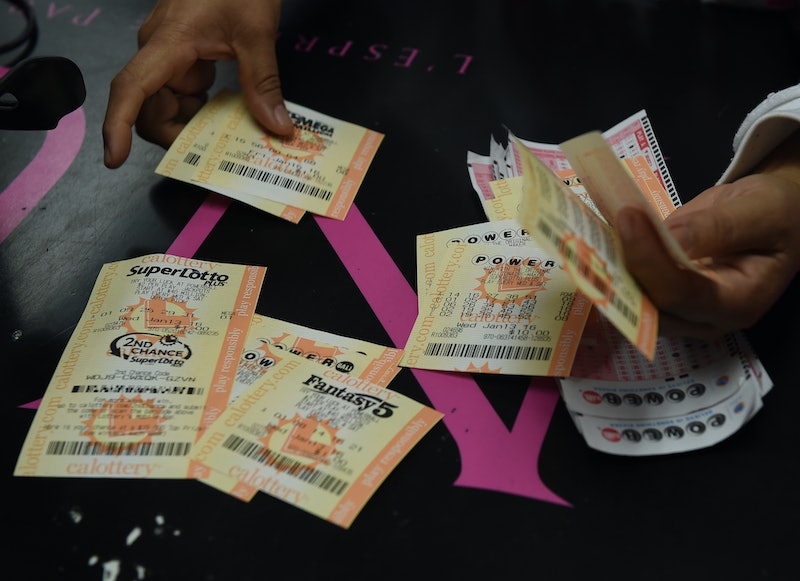 Thanks to a rule change in October of last year decreased the odds of winning the Powerball jackpot from one in 175 million to one in 292 million, the jackpot rose to an astronomical $1.5 billion before Wednesday's draw. So exactly how many Powerball tickets were sold this round throughout the country?

Gary Grief, chair of the Powerball game for the Multi-State Lottery Association, told ABC News that 371 million tickets had been sold for the record-breaking draw as of Wednesday afternoon. This likely came after huge surges of ticket buying in California — where it turns out a winning ticket was in fact sold, in Chino Hills. $37 million in ticket sales were reported in the Golden State Friday, and a whopping 59.1 million dollars' worth of tickets were purchased Saturday. That breaks down to an estimated 48.5 million individual tickets sold over the course of two days in California alone — or about one and a quarter tickets sold per resident of the state, regardless of age!

While this record-breaking jackpot is likely to make a lucky Californian feel, well, like they just won the lottery, the real winners of Wednesday's drawing are the Multi-State Lottery Association itself. Despite a fraud scandal in October, in which founder and executive director of the Association Charles Strutt was placed on administrative leave, the record-breaking jackpot and frenzied ticket sales may mean that players are willing to overlook the ongoing investigation for a chance to win big.

Meanwhile, Ron Wasserstein, executive director with the American Statistical Association, told The Los Angeles Times that larger jackpots were probably the reason behind the October rule change, in the hope that the increased winnings would drive ticket sales higher. While there are plenty of conspiracy theories about the lottery, with varying degrees of believability to them, the rule change came just a week before Strutt was placed on indefinite administrative leave and his deputy, Bret Toyne, was appointed interim executive director.

Regardless of whether you think the lottery is harmless fun or that the Powerball is a distraction from rising economic inequality, a fair and transparent game benefits everyone in the long run. A loss of confidence in the fairness and impartiality of the Powerball and games like it would in all likelihood result in a massive drop in ticket sales, making future massive $1.5 billion dollar payouts like this one less likely to occur.

More like this
Twitter Has *A Lot* To Say About The "Single Penalty”
By Sam Ramsden
Emily Atack’s Net Worth Would Make Charlotte Hinchcliffe Proud
By El Hunt
David Beckham’s Controversial Qatar Deal Skyrocketed His Net Worth
By Catharina Cheung
These Cheap Bras & Underwear On Amazon Are Actually Effing Amazing
By Karen Belz
Get Even More From Bustle — Sign Up For The Newsletter
From hair trends to relationship advice, our daily newsletter has everything you need to sound like a person who’s on TikTok, even if you aren’t.