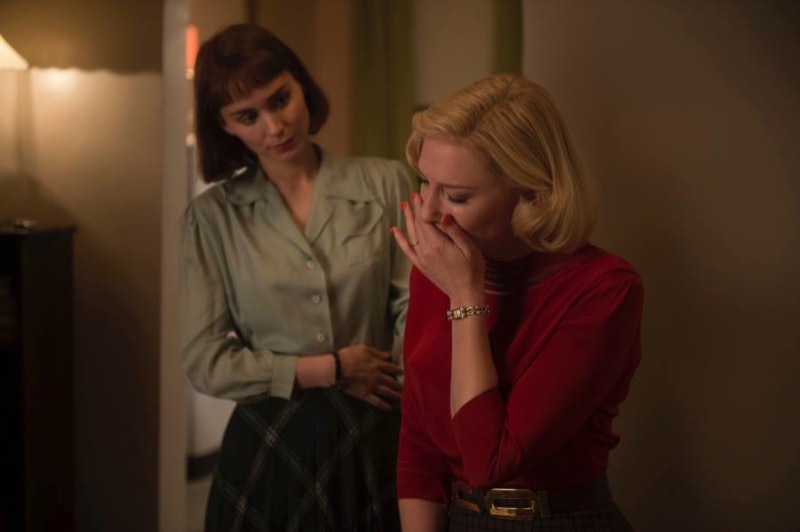 With up to 10 potential spots available for Best Picture at the 2016 Oscars, Carol seemed destined to be included on the list: critics considered it a pretty sure bet, and with an astonishing show of stellar reviews upon its November release, most just assumed it would be up for the big award. Even as early as last spring, critics were certain that it would get a Best Picture nod. So it was definitely a surprise when the nominations were announced that Carol was snubbed for an Oscar nomination for Best Picture. I know, I'm shocked too!

Carol didn't get snubbed altogether, though: It received four nominations, including a Best Actress nod for Cate Blanchett and a Best Supporting nod for Rooney Mara, both of which were equally expected. It also scored a nomination for Best Adapted Screenplay by Phyllis Nagy and Best Original Score by Carter Burwell. So it obviously had a pretty high showing, but since only eight films were chosen for Best Picture, there were potentially still two available spots: Why didn't Carol rank among them?

Unfortunately, we may never know the answer. With such a tight competition, it's impressive to receive four nominations (especially in both the Best Actress and Best Supporting Actress categories), but critics have their theories. It's possible that the premise of an all-female love story might still be "taboo" for the Oscars. I hope that's not true, because it's a truly stunning feminist love story all the way around.

It's unclear if the Academy changed the number of films for Best Picture from ten to eight (they haven't yet released anything about a change), but either way, they should've left a space for Carol. If you haven't yet seen it, I highly recommend that you do. Despite the Academy snubbing it for Best Picture, it truly is one of the best films of the year, and deserves all the accolades it has gotten.

More like this
Here’s Everything Coming To & Leaving Netflix In July
By Grace Wehniainen
'Dune: Part Two' Could Include A 'Little Women' Reunion
By Arya Roshanian and Alyssa Lapid
Jurnee Smollett’s Heart Is Healing
By Rebecca Carroll
What Is Miles Teller's Net Worth? How The 'Top Gun: Maverick' Star Made His Millions
By Meg Walters
Get Even More From Bustle — Sign Up For The Newsletter