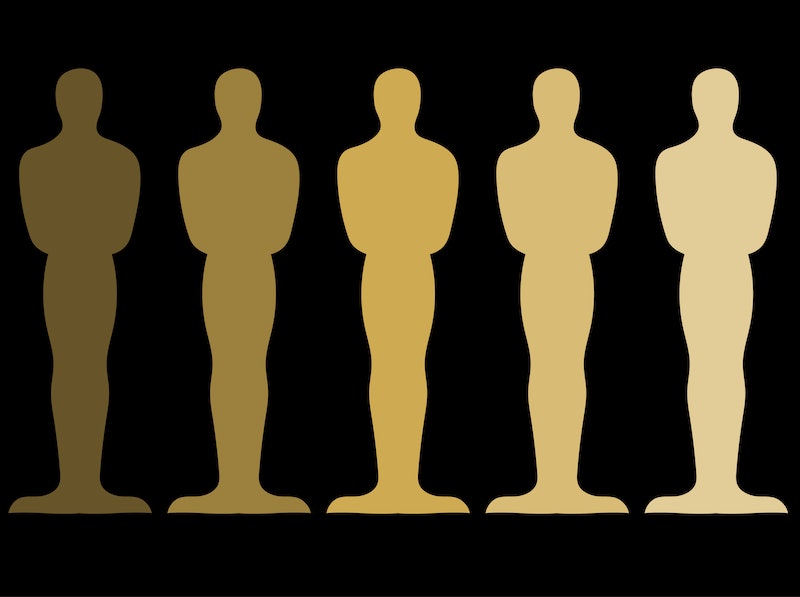 One year ago right now, the Academy of Motion Picture Arts and Science drew the ire of film fans around the globe when it failed to nominate a single person of color in any of the four Acting categories. That was the first time all 20 acting Oscars nominees had been white since Braveheart won Best Picture at the 1996 ceremony, a span of 19 years. This dubious distinction was dubbed #OscarsSoWhite by incensed Twitter users. Given the bad publicity, you would think that both Hollywood and the Academy would have taken measures to ensure such a debacle wouldn't happen again — Hollywood by making more diverse movies and the Academy by recognizing them. So, did it work? How diverse are the 2016 Oscar nominations?

It pains me to report that, sadly, nothing has changed. Even as our country grows more diverse, Hollywood seems to be moving backward. Although the Academy managed to go almost two decades without whitewashing the acting fields, it has now happened two years in a row. That's right: 2016 is the year of #OscarsSoWhiteAgain. The only nominee of color that was expected to receive a nomination this Thursday morning was Idris Elba as a fearsome Commandant in Netflix's Beasts Of No Nation. He had previously been honored by the likes of the Golden Globes, the Screen Actors Guild, and the BAFTA (basically the British Oscars) and was therefore considered pretty much a lock for a nod. But that's exactly the problem: the fact that one person was snubbed suddenly turned the 2016 Oscars into one of the least racially diverse ceremonies in history. Why was there only one legitimate contender that wasn't white?

Here are the movies, directors, and actors the Academy should have considered if they had wanted to make the Oscars more diverse.

If the Academy had wanted to include a movie that wasn't about white people in its lineup, it needed to look no further than this summer's smash hit musical biopic Straight Outta Compton. It was actually considered a solid contender for a nomination, having racked up honors from the American Film Institute, the National Board of Review, the Writers Guild, the Producers Guild, and even a surprise Best Cast nod from the Screen Actors Guild. If the Best Picture field had expanded to its maximum of 10 nominees, perhaps it could have made it in.

But still, there's something to be happy about here. Two of the eight nominees for Best Picture revolve squarely around female protagonists: Brooklyn and Room. That's certainly a step up from last year, in which only one out of eight Best Picture nominees even had a female co-lead, the Stephen Hawking biopic The Theory Of Everything. Sadly, the Cate Blanchett/Rooney Mara lesbian romance Carol was snubbed here, which would have increased the diversity both in terms of gender and sexuality.

Most predictors knew going in that the Best Director would once again, per usual, be dominated by five white men. But that doesn't make it any less frustrating to see it happen time after time after time. Ridley Scott's snub for The Martian (his slot was presumably usurped by Room's Lenny Abrahamson) was one of the most shocking upsets of the nominations this Thursday morning. One might wish that, if there were going to be a shocking upset in this category, then the surprise inclusion could have been Compton's F. Gary Gray — one of the only non-white-male directors on the list of possible contenders... the only other two being Suffragette's Sarah Gavron and By The Sea's Angelina Jolie Pitt, both way down the list of likely nominees.

There were a couple minority actors in contention for this prize, but sadly neither of them could break into a stacked deck that includes Leonardo DiCaprio in what's assumed to be his victorious year, and last year's winner, Eddie Redmayne. Will Smith received a Golden Globe nom for Concussion — although that movie didn't end up receiving any Oscar nominations, which doesn't make Smith's absence all that surprising. But then there's Creed's Michael B. Jordan; the Academy clearly loved the movie, nominating Sylvester Stallone for Supporting Actor... but its young star will just have to wait for another chance at the gold.

Both the Lead and Supporting Actress categories are, surprisingly, even more glaring in their absence of legitimate contenders of color than their male counterparts. The other woman considered to be in close consideration for a nomination here that missed out include plenty of white actresses like Charlize Theron (Mad Max: Fury Road), Lily Tomlin (Grandma), Maggie Smith (The Lady In The Van), Emily Blunt (Sicario), and Carey Mulligan (Suffragette). Pretty much the only non-white performer whose name was even mentioned in the Best Actress race this year was Brazilian actress Regina Casé for the indie drama The Second Mother, for which she won a Special Jury Prize at this year's Sundance Film Festival.

As I mentioned before, Elba's snub was one of the most unpleasant surprises of the year. I suspect that his absence from the Supporting Actor category has more to do with the Academy's hesitance to embrace Netflix as a legitimate Oscar contender than it does with the color of Elba's skin or the Academy's opinion of his performance. But that doesn't make his snub sting any less. Sicario's Benicio del Toro (who previously won in this category for 2000's Traffic) was considered a dark horse contender, but ultimately he failed to make the cut as well.

Like the Leading Actress category, you have to move pretty far down the list of possible nominees to even find a minority contender. Indie drama Tangerine famously launched the first-ever Oscar campaign for transgender performers earlier this year, promoting its two stars: lead actress Kitana Kiki Rodriguez and supporting actress Mya Taylor (both of whom are performers of color in addition to being trans). Alas, such diversity might be a step too far for the Academy at this point.

Time for some good news! Like Best Picture, the two Screenplay categories (Original and Adapted) are encouragingly diverse — especially when compared to the Acting fields — but once again, that diversity is in terms of gender, rather than race. In addition to #OscarSoWhite, the 2015 Oscars were also infamous for including zero female writers. This year, then, is a 400 percent improvement on that score, with famous male writers like Quentin Tarantino (for The Hateful Eight) and Aaron Sorkin (for Steve Jobs) being ignored in favor of films scripted or co-scripted by women: Inside Out (co-written by Meg LeFauve) and Straight Outta Compton (co-written by Andrea Berloff) in the Original category, Carol (by Phyllis Nagy) and Room (by Emma Donoghue) in the Adapted category.

If only Amy Schumer had managed to nab a nomination for her Trainwreck script, women would have constituted a full 50 percent of 2016's Screenplay nominees! That's okay — Schumer will probably have another shot at a nom when that movie she's co-writing with Jennifer Lawrence comes out.

The 2016 Oscar ceremony will take place on Feb. 28, hosted by non-white comedian Chris Rock. So, you know, there's that.