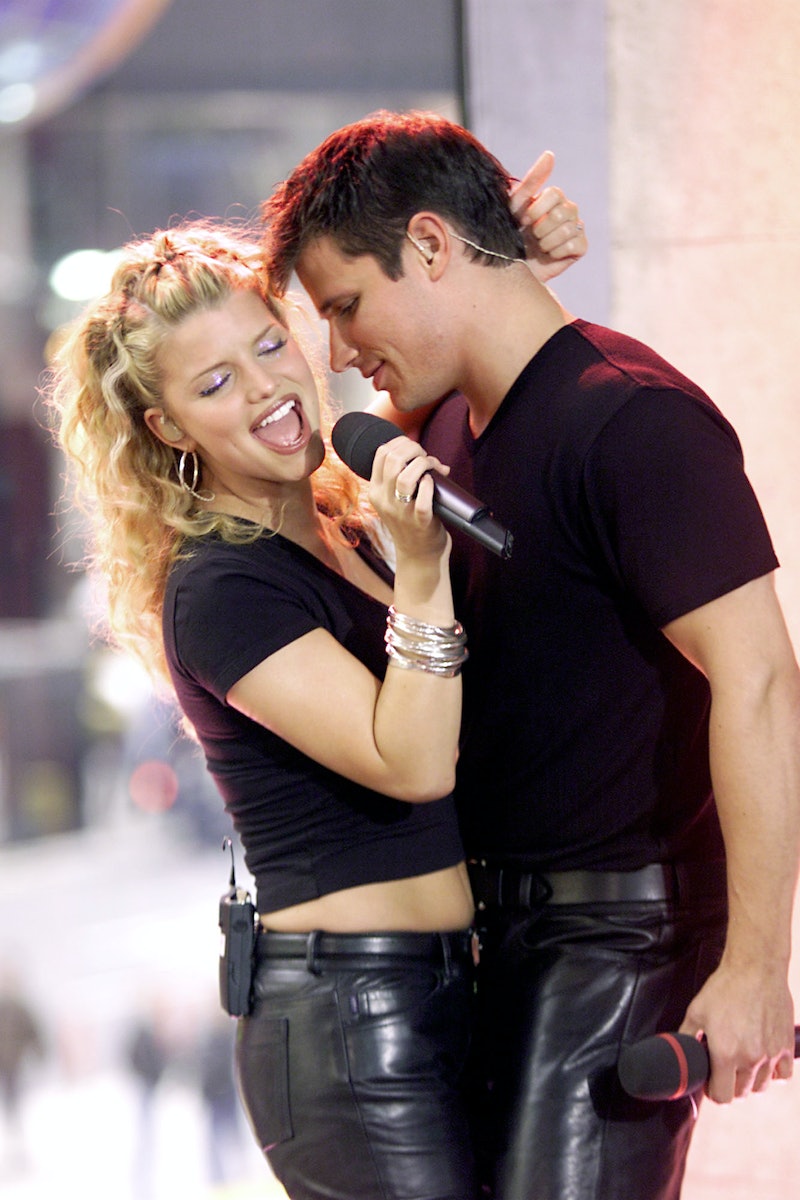 If you grew up in the '90s and '00s, were into popular music, and watched television, MTV's Total Request Live was, undoubtedly, a huge part of your life. It seems almost like an ancient concept now that there was a time when MTV actually played music videos, and the concept of TRL at that point was so simple, yet so genius. Why not just get some cute VJs (video jockeys) and have kids vote everyday to see their favorite videos battle it out for the top spot of the day. I totally spent a dumb amount of time voting for *NSYNC videos, but that's a story for another day. Since I am reminiscing, and you probably want to join in on the fun, here are 39 throwback TRL pics that will awaken your nostalgia... and secondhand embarrassment.

It is almost comforting looking back at these photos knowing that we really have learned and moved on from the late '90s and early '00s fashion sense. What were we all thinking, really? Why was everything so neon-colored? Why did we wear such terrible hair clips? Why those velour jumpsuits, why?!

Questionable style aside, these throwback TRL photos will remind you of a time when life was easier and Britney Spears ruled the world.

1. When Marilyn Manson Was Still Around

This photo proves the power of TRL during this time. Everyone wanted to be on the show, even Marilyn Manson.

2. When *NSYNC Was The Hottest Band On Earth

Ugh, this one is making me misty-eyed. Goodbye, youth.

No one could tell me that these two weren't going to stay together forever. How the times have changed.

Then-New York City mayor Rudy Giuliani came on the countdown with a firefighter, when the show continued after the devastating attacks on the World Trade Center on Sept. 11, 2001.

5. When The Lord Of The Rings Cast Was Perfect

6. When That Pepsi Billboard Was Everywhere

Sure, Elijah Wood, Sean Astin, and Dominic Monaghan were part of Lord of the Rings and awesome and all that, but do you remember that Pepsi ad in the background? Britney Spears for Pepsi was EVERYTHING.

7. When Shakira Belly Danced Into Our Lives

Shakira was just beginning her major crossover into the English market with "Whenever Wherever" and she hasn't left since.

8. When Pink Had An Annie Moment

Obvious hair observations aside, remember when everyone wore one of those Hot Topic fingerless gloves? Why?

Their boy band run was brief, but, oh, was it good for teen girls everywhere.

10. When Britney Spears Was The Queen of Pop

Britney always had to show some belly. Even when wearing a... shrunken puffer coat?

12. When Ozzy Osbourne Was The King of MTV

Puff Daddy and Ozzy Osbourne posing together is sooo 2002.

Literally all the dudes wore these beanies back in the day. Lenny still looked good though.

14. When They Made J. Lo Work Behind The Scenes

You know Jenny From The Block wouldn't take that kind of treatment anymore.

15. When Eve Posed With Destiny's Child

These were the literal TRL Queens.

16. When Beyoncé Wore A "Bootylicious" Belt

Beyoncé's mama Tina never skimped on dressing the girls in some of the most intense matching get-ups.

Whatever you think of him now, Carson Daly's voice will forever be ingrained in your 14-year-old memories.

This photo is a little disconcerting, considering they all look like babies in those baby blue tracksuits.

Velour track suits and high heels were J. Lo and Paris Hilton's go-to looks. Actually, every girl had their time in the early '00s.

21. When Tom Green Was Relevant

What ever happened to Tom Green? Remember when he dated Drew Barrymore?

22. When Outkast Was Cool

And they still are. Seriously, was there ever a time when Outkast weren't the coolest and most talented dudes ever? Their style and music transcends any time.

23. When The Cast Of A Walk To Remember Visited The Show

24. When Britney's Abs Appeared For The Millionth Time

I definitely had a photo of Britney Spears performing "I'm A Slave 4 U" at the 2001 MTV Awards as my fitness inspiration.

25. When Hugh Jackman Had Flowing Locks

Was he auditioning for the live action Beauty and the Beast film?

26. When The Rock Charmed Rosario Dawson

These Rundown co-stars seemed to have a lot of chemistry.

27. When The Rock & Rosario Dawson Made Out

They literally couldn't hold it in any longer.

28. When The Osbournes Ruled Reality TV

Look how young they are!

29. When Brittany Murphy Was One Of The Brightest Stars

She was always happy and laughing and seemed like a blast to be around.

30. When Charlie's Angels Dropped By

One of the first reboot films that kicked off the trend of kick-ass ladies in action films.

31. When Benji & Joel Madden Were Your Bad Boy Crushes

Look at those mean mugs.

33. When Will Ferrell Was A Britney Fanatic

34. When Colin Farrell Was Cheeky

He knew that the ladies loved him.

35. When Puff Daddy Ran On A Treadmill On Live TV

Making pop queen Britney Spears hold your towel for you was something only P.Diddy could get away with.

36. When Justin Timberlake Wore This Outfit

Men in the early '00s loved those beanies with the tiny bill, didn't they?

37. When Colin Farrell Was The Actor Bad Boy

He's got the beanie, and the bracelets and long chain necklaces are giving Johnny Depp a run for his money. How could we forget that sexy Irish accent?

38. When Hayden Christensen Was In Star Wars

I think we have all collectively tried to forget that these Star Wars prequel movies ever happened.

39. When The Fans Couldn't Keep Their Hands Off Nick Carter

I always dreamt of being in the audience and being able to touch my favorite pop star. I mean, uhhh...

All of these photos are making me want to bust out my old scrapbooks and laugh at all of the silly memories this show and these people brought into our lives. C'mon, Netflix, get on those TRL re-runs!