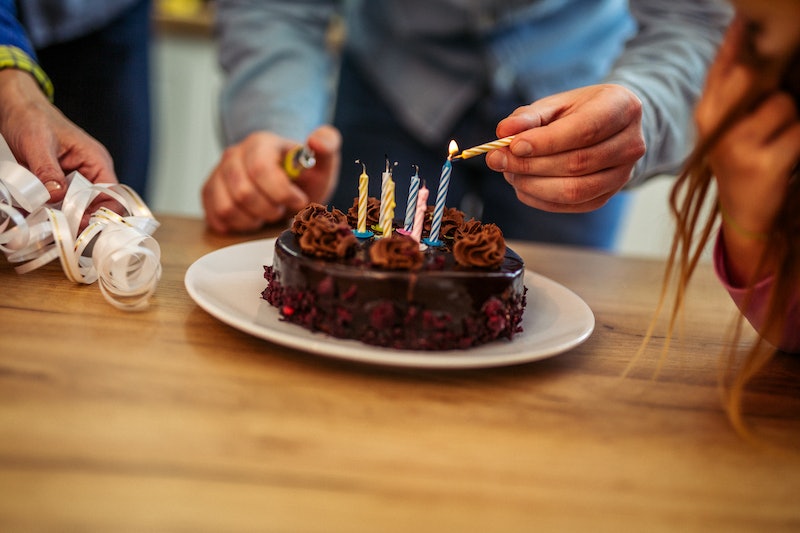 '90s-themed parties are all the rage these days (who doesn't want a reason to dress up like Will from The Fresh Prince?), but what about the parties we actually had in the '90s? Those were the bomb, or, rather, the bomb dot com. As someone who celebrated 10 of her birthdays in the 1990s, I know first hand that it didn't get much better— Ninja Turtle invites? Gift bags full of candy and toys? Parents doing all the clean-up after? Man, we had it good.

When you're a kid, every birthday is special. You are super excited to grow up, and there are so many milestones to hit — double digits, then teens. Childhood birthdays are large affairs. You have to invite everyone in your class so that you don't hurt any feelings, and what's even better is that everyone has to buy you a present (not just a cheap beer, like our parties these days).

After you turn 21, birthdays become smaller, more sedate gatherings, on the long march towards the big 3-0. It can sure make you miss the soda and Yoohoo-fueled craziness of an afternoon spent at Chuck E. Cheese, or whacking a piñata in the backyard 'til it explodes. But perhaps we should bring back some of our 1990s ways and make our birthday bashes a little less grown-up — so let's take a moment to reminisce about those special moments that made our parties growing up great.

1. Bringing In Cupcakes Or Donuts For Your Entire Class

If you're birthday fell during the school year, that equalled instant popularity— 'cause you brought in the treats. All your fellow students' eyes would light up at the sight of that sweet, sweet sugar. Once the baked goods were distributed, though, came the tough choice: Do you eat it right away, or hoard it for later?

So much better than an email!

3. Having Your Party At An Arcade

Remember when all you needed to have a good time was a handful of tokens? Whether you were into playing video games like Mortal Kombat and The Simpsons, or whether you were a Skee-Ball devotee, there was something for everyone. Even Dance Dance Revolution came out in 1998. But the most important part of an arcade birthday was winning as many tickets as possible, so you could trade them in for a prize at the end!

4. Celebrating At Home Was Also Cool

When the party was hosted at your house there were always amazing decorations and all the junk food you could eat. I'm talking chips, pizza, soda (bonus points if it was cherry cola) — you name it. To keep the screaming kids busy, there had to be fun activities: Playing a game of Twister and trying as hard as possible to get your right foot on yellow was always good for a laugh; the quieter kids would gather around the board games, amusing themselves with Clue, Guess Who?, or perhaps a little Sorry or Uno; and sometimes there would even be a magic show or a performance by a clown (that would surely scar you for life).

Whether it was made from scratch or came out of a box, the cakes your folks made were the best. I don't know if it was the extra love that parents put into it, or just being a sugar-crazed kid, but nothing could beat Funfetti.

Remember those candles that, no matter how hard you tried to blow them out, would stubbornly stay lit as if by magic? It was super cool, but oh, the humiliation! The shame! Why would your parents choose to prank you on your birthday of all days? Your friends would have a good laugh at your expense, while you continued to try and blow out the candles. Thankfully, after you finished mopping up a giant piece of Power Rangers cake, you'd start to forget why you were so upset in the first place.

Tired of playing games? You could always pop a VHS in the old VCR and have the time of your life. The Mask and Jumanji never got old.

8. Taking Photos With A Disposable Camera

With a limit of only 27 pictures, your parents had to be FujiFilm pros in order to capture the moment. If they somehow managed to get the perfect "blowing out the candles picture," it was all the more special. But you had to wait a day or so for the film to develop to see if any of the photos were album-worthy (or if your dad had his thumb over the lens the entire time).

You looked super fresh, though the elastic was always a bit uncomfortable under your chin.

At some point towards the end of the party you had to open all the gifts in front of everyone. And it was kinda fun to watch them all get super jealous.

Um, getting a bag full of candy and toys as payment for going to a party? We should definitely reinstate this tradition. Slap bracelets and puffy stickers in mine please!