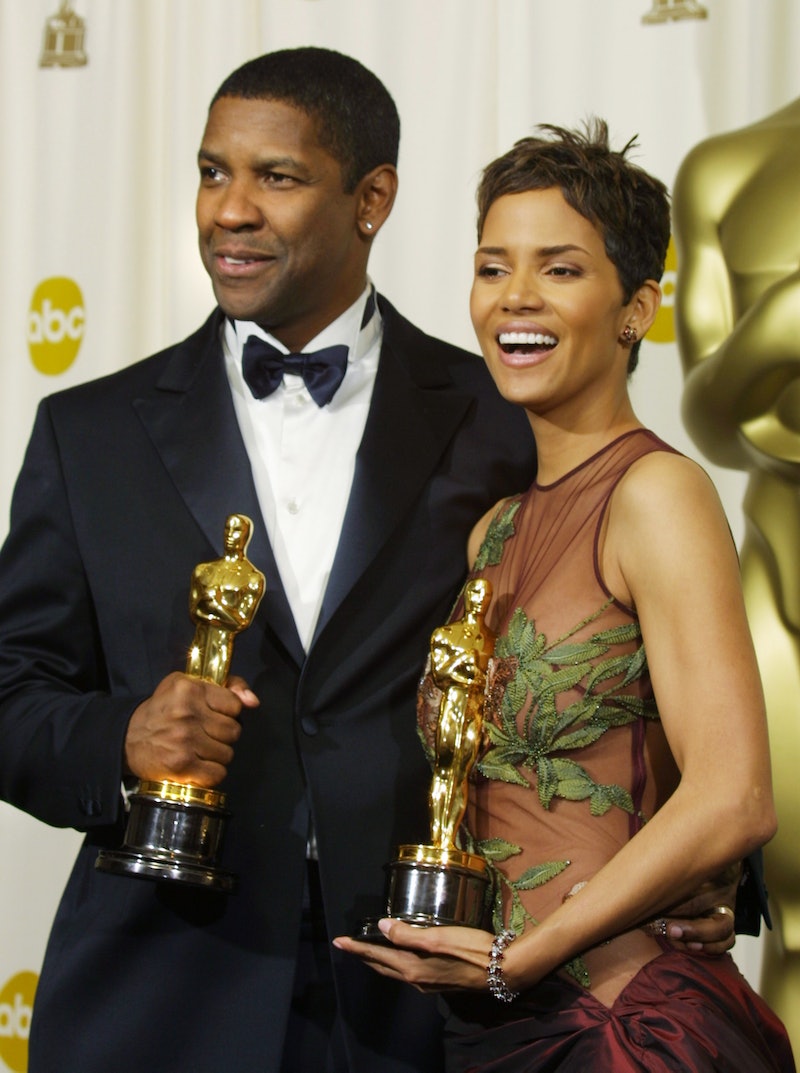 No matter what you think of the show, it's hard to deny that the Academy Awards do have worth: in some cases literally — an Oscar has been estimated to be "worth" about a 20 percent pay increase for winning actors — and in other cases not quite so literally… but even more importantly. Over the course of its 86-year history, there have been a lot of amazing, defining moments during the Oscars, and there's a ton of photographic evidence to prove it. Though things like a lack of diversity amongst nominees have plagued the awards show over its lengthy time in existence, it's hard to deny that it's an influential, important hard of Hollywood history.

Case-in-point: Every now and then, the meticulously produced ceremony can surprise us all by yielding a remarkable unscripted moment, whether it be Academy Awards host David Niven quipping about the infamous 1974 Oscar streaker's "shortcomings"... or an entire 3,400-seat auditorium full of grown men and women weeping en masse after the moving performance of Selma's Original Song winner "Glory," performed by Common and John Legend at last year's ceremony. These things don't happen all that often, but they do happen, and they're important to remember as the show rolls around each year.

Here is a list of some of those most important moments, captured by one defining image from each decade:

To be fair, the first Annual Academy Awards were the only Oscar ceremony to take place in this decade. At that inaugural event, the Best Actor and Actress winners were awarded for their body of work over the entire preceding year; while Emil Jannings took home his trophy for The Last Command and The Way Of All Flesh, Gaynor was honored for her work in not one or two but THREE films: 7th Heaven, Street Angel, and Sunrise — that year's winner of Unique & Artistic Production (a now-defunct award). The fact that she had risen from uncredited extra to Oscar winner in just three short years made her victory even more impressive. Gaynor would continue to act onscreen for another three decades, earning one more Oscar nomination (for 1937's A Star Is Born) along the way.

Though she was only six years old at the time, Shirley Temple was already such a Hollywood sensation that the Academy had to invent a brand new category just to honor her — a category they dubbed the "Academy Juvenile Award." Rather than be presented every year, this award was only given sporadically, whenever a young performer was deemed worthy enough to have earned it. Future honorees included Mickey Rourke, Judy Garland, and Hayley Mills (who earned the last-ever Juvenile Award for her role in 1960's Pollyanna).

The 18th Academy Awards were the first to take place after the end of World War II, and thus were the first to return to the Old Hollywood glamor and opulence of the early years. Nowhere was this glamor reflected more than in Best Actress nominee Joan Crawford, one of the biggest stars in Hollywood history. But even huge stars have their insecurities; apparently so terrified that she would lose for her seminal role in Mildred Pierce, Crawford feigned illness and stayed home. When she DID win, she welcomed the press into her home and accepted as the statuette was personally delivered to her in bed.

For all the talk of an "Oscar curse," there are just as many (if not more) examples of when winning a statuette launched a promising career into the stratosphere of fame. Prior to Roman Holiday, 24-year-old Audrey Hepburn only had a handful of feature film credits to her name, including roles as "Stewardess," "Hotel Receptionist," and "Cigarette Girl." But when she became one of the youngest Best Actress winners of all time, she immediately transformed into one of Hollywood's all-time most iconic actresses. Just think: Sabrina, Breakfast At Tiffany's, Charade, and My Fair Lady all might not have happened — or at least not as we know them — without this moment.

Legendary actor Sidney Poitier was both the first black actor to be nominated in the Best Actor category (for 1958's The Defiant Ones) and the first black actor to win the category (for 1963's Lilies Of The Field), besting the likes of Albert Finney, Richard Harris, Rex Harrison, and Paul Newman for the honor that year. Only one black performer had won an Oscar up to that point: Hattie McDaniel's Supporting Actress win for 1939's Gone With The Wind. To this day, only 12 actors and actresses have joined McDaniel and Poitier in the ranks of black Oscar winners.

This is largely considered the most memorable moment in Oscar history: In protest of Hollywood's treatment and portrayal of Native Americans, legendary actor Marlon Brando famously turned down his second Best Actor trophy (for 1972's The Godfather) by sending Native American activist Sacheen Littlefeather in his place to read a letter he'd written condemning the Academy.

The most quoted — and most mis-quoted — Oscar speech is undoubtedly Sally Field's effusive acceptance of the Best Actress award for her role in Places In The Heart: "The first time I didn't feel it, but this time I feel it, and I can't deny the fact that you like me. Right now, you like me!" (No, she never actually said, "You really like me.") Such a fervent desire for approval seems odd coming from someone who'd already won an Oscar (for 1979's Norma Rae), but at least it created an indelible mark in Oscar history. How many other actors' speeches are we still quoting decades later?

It's hard to imagine it now, given their superstar status, but there was a time when actor/writers Ben Affleck and Matt Damon were underdogs, and basically-unknown upstarts facing a stacked deck in the race for Best Original Screenplay after making their first feature (aka, Good Will Hunting). But they emerged victorious over the likes of Woody Allen (for Deconstructing Harry), P.T. Anderson (for Boogie Nights), and James L. Brooks (for As Good As It Gets), making Affleck the youngest-ever winner in the category at 25 (Damon was 27). Just watch the video and listen to the crowd's spontaneous cheer and the stunned, overwhelmed looks on Affleck's and Damon's faces and try not to fall in love with them all over again.

Washington and Berry are two of the 12 black actors who have gone on to win Oscars in the wake of pioneers Hattie McDaniel and Sidney Poitier. Denzel had previously won Supporting Actor for 1989's Glory when he picked up his Best Actor trophy for Training Day, becoming only the second black actor to win the category since Poitier. (Jamie Foxx and Forest Whitaker have both gone on to victory since 2002.) Even more notable was Berry's win for Monster's Ball, which made her the first and only black actress to win in the Best Actress category EVER — a fact that still stands in 2016. The fact that Washington and Berry won the two top prizes in the same year was a defining moment in Oscar history... and only serves to remind us all how, in 2016, Hollywood needs to do better when it comes to diversity.

We all know that Hollywood is a boy's club, but nowhere is that fact more apparent than in the Oscars' Best Director race. Although the Academy has been handing out awards for 88 years and there have usually been five nominees in the category every year — translating to over 400 Best Director nominees in total — only four women have ever even been nominated for the honor: Lisa Wertmüller (Seven Beauties, 1977), Jane Campion (The Piano, 1994), Sofia Coppola (Lost In Translation, 2004), and Kathryn Bigelow (The Hurt Locker, 2010). The latter is the only one that managed to win, triumphing over her own ex-husband (Avatar's James Cameron) in the process. Since then, several women have tried to add their names to the list — including Angelina Jolie (Unbroken), Ava DuVernay (Selma), and Bigelow again (for 2012's Zero Dark Thirty); the fact that none of them have been successful, even after Bigelow's groundbreaking victory, only goes to show how slowly things change in Hollywood.

Will the 2016 Academy Awards produce any defining moments? Who knows — as this list proves, sometimes, the Oscars can surprise us.