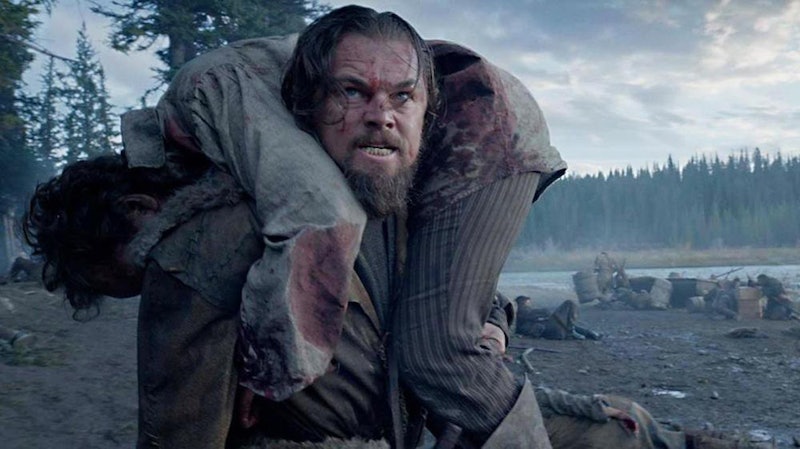 The Golden Globes are over and done with, and the awards show may have shed some clues about what should be considered the 2016 Oscar movies, since the nominations are taking place later this week. Creed, Room, Joy, and Steve Jobs all scooped up awards for acting, while The Martian won for both Best Picture - Comedy and Best Actor in a Comedy (Matt Damon). But the night's biggest winner, somewhat surprisingly, was The Revenant . The gritty survival Western won for Best Actor in a Drama (Leonardo DiCaprio), Best Director (Alejandro González Iñárritu), and the coveted Best Picture - Drama. But since the Globes don't always predict the Oscars so accurately, there are some other films flying under the radar who can expect to do well on Hollywood's biggest night.

Oddsmakers Gold Derby ranks all of the films' odds heading into the Oscars, giving fans a pretty good idea of what to expect when the Academy Awards finally arrive. Not surprisingly, The Martian and The Revenant are both currently ranked very high, fresh off their Globe wins, but one film still outranks them — and by a good margin. And surprisingly, it's a movie that didn't win a single Golden Globe. Here it is, along with 11 other potential "Oscar movies" for this year.

Despite being shut out at the Golden Globes, the film about the Boston Globe reporters who uncovered the Catholic Church sex abuse scandal is still considered the frontrunner to take home the Oscar for Best Picture — though the success of The Revenant, and to a lesser extent The Martian, have definitely caused the movie to lose some of its sheen.

Other than perhaps DiCaprio's performance, this epic revenge film wasn't expected to make a lot of noise at the Oscars. But after its dominating performance at the Globes, anyone would be a fool to underestimate it now (kinda like Hugh Glass). Plus, Iñárritu's Birdman won the Best Picture Oscar that year, so the director is clearly known to the Academy.

People can argue all they want about whether or not this movie about a man trapped on Mars should have been categorized as a comedy at the Globes, but after its two victories, it's all but guaranteed to be in the Oscar conversation (the Oscars do not categorize films as comedies or dramas).

This film about a budding (and forbidden) lesbian romance in midcentury America was the talk of the town heading into the Globes, as it had more nominations than any other film — and then it didn't win a single one. Still, the Academy tends to favor smaller, more intimate films such as this, whereas the Globes often award bigger, broader fare (see: The Revenant, The Martian).

This comedy/drama from Adam McKay about the 2008 financial crisis had been making a late push into awards season, but its unexpected defeat at the hands of The Martian at the Globes could set it back a bit. Still, expect it to be in the mix.

Summer action movies, especially those that are sequels to '80s franchises, typically don't do so well at the Oscars. But the fact that this groundbreaking film is still in the conversation after all these months means it's basically a lock for a Best Picture nomination. And who knows, maybe it will even win.

Brie Larson's big Globes win for acting could give a boost to this film about a kidnapping victim and her son, which is currently languishing near the bottom of the oddsmakers' top 10 ranking (10 films are nominated for Best Picture at the Oscars).

The second biopic to come out about the Apple founder in two years, the film bombed at the box office and was largely forgotten about. But after scoring wins for Best Screenplay and Best Supporting Actress (Kate Winslet) at the Globes, it suddenly finds itself back in contention.

Pixar's wildly inventive story about the emotions inside a young girl's head won the Golden Globe for Best Animated Film, resisting a late push from Anomalisa. Expect the same outcome at the Oscars, where it may even sneak into the Best Picture and Best Original Screenplay categories.

The Oscars definitely don't want another #OscarsSoWhite controversy on their hands this year, and this NWA biopic was one of the most talked about films of the year, and is easily the most diverse contender in a sea of white.

This Cold War espionage thriller didn't make a lot of noise when it was released, but the Academy is unlikely to ignore the combination of Tom Hanks and Stephen Spielberg, and its reviews are solid.

Released too late in the year to be nominated at the Globes, the biggest film of all-time is eligible for an Oscar, and will almost definitely be a part of the ceremony.

There you have it, the 12 "Oscar movies" for 2016. The actual nominations will be announced on Thursday, but don't expect too many surprises beyond what you see listed here.