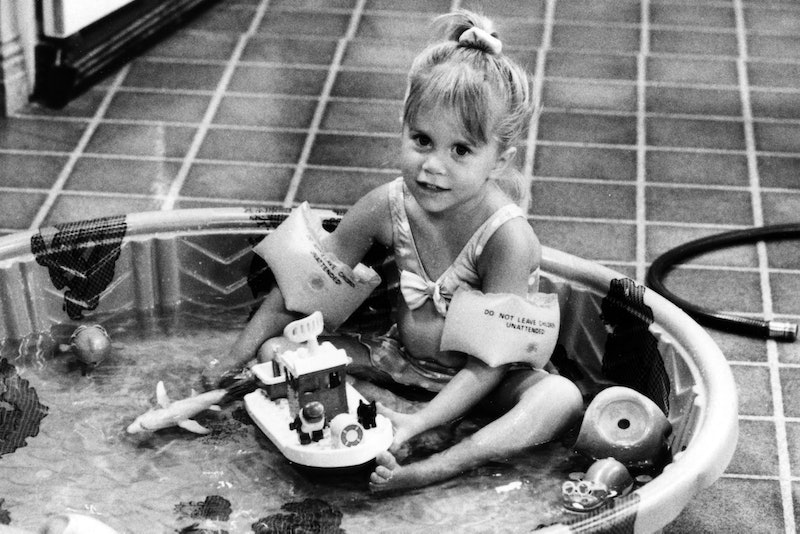 I'm not going to argue that the beloved Tanner family on Full House wasn't at least a little bit abnormal. I mean, it's not too often that families have nine people living in one house — can you even imagine what it's like to cook dinner for that many people on a regular basis? And the amount of laundry they must have accumulated?! *shudders* And let's not even dispute the questionable employment situation of Joey and Uncle Jesse... how were they able to hold jobs and simultaneously always be around to take care of the girls and Nicky and Alex when they were born? I mean, it was an absolute miracle. Still, despite all of that, they generally seemed like a pretty normal family. They loved each other (and loved to hug!) and were always supportive of one another. Still, these old Full House set photos definitely make me scratch my head a bit because I now have about a million questions for the Tanners.

I totally get that this is a fake family on a sitcom designed to get laughs out of the audience, but these photos are nothing short of wonderfully bizarre. Maybe there was more to this incredibly full house than meets the eye. I have so many questions.

1. Why Are These Girls Wielding Shaving Cream?

Seriously, what is happening here? Why did this boy get bombed with shaving cream by the Tanner girls?

2. Is This Some Kind Of Danny Tanner Punishment?

Why are they standing in a line up, laughing at poor Danny? Even Comet was getting in on the action, but at least he has a look of remorse in his eye.

3. What Is With The Cleaning Solution?

Did Joey put said cleaning solution in double Michelle's water glass? Is that why the twin on the right looks so distressed?

4. Why Is Michelle Swimming In The Kitchen?

OK, I know this one was addressed in an episode of the show. But these people had a perfectly normal backyard with plenty of room for a kiddie pool. And San Francisco definitely has weather that's decent enough for swimming at least some of the year. So why was it ever put in the kitchen?

Alright, just one comment. This wig is not good. I'm blaming Silvio.

Something mischievous is going on here. I can feel it.

7. Hey, What Are You Doing With Your Hand?

Rebecca's hands look like they're headed to late-night cable territory, and it's making me feel things. This is a family show, you two!

8. Is This A Synchronized Greek Dance?

9. Is There Someone In The Easel Telling Them To Make That Face?

Is this like Poltergeist but a more artistic version?

10. Is Stephanie Showing Off Her Shirt?

Obviously her '80s fashion is stellar, as always.

11. What Is Happening To That Action Figure?

Based on the position of that empty box, it doesn't look like things end well for him.

12. Doesn't This Go Against All Of Danny Tanner's Convictions?

Seriously, though. I get that he's pissed about the "swimming in the kitchen" thing, but isn't placing a wet child in a towel on the counter very un-Danny Tanner like?

13. Was This The Start Of A Serious Thumb Wrestling War?

It's going down, for real.

14. Is Stephanie A Secret Snacker?

That's a whole lot of snacks for such a small person. Are her sisters (and Kimmy) sitting her down for an intervention?

And is Joey just thumb wrestling with himself? I have so, so many questions.

16. Who Taught This Toddler About Bribery By Way Of Lollipop?

Upon closer inspection of the drawings Jesse is holding, it looks like the man is smothering his sleeping partner with a pillow due to her snoring. This took a turn real quick.

18. Why Does Everyone Look Seriously Distressed?

If this is from the episode when Papouli dies, I get it. It hits me right in the feels, too.

19. Why Is Joey Wearing A Woman's Scarf?

And taking a selfie?

OK, not a question but these two are just so hot. Fuller House is great, but they should get their own spin-off. And I'm still not over the fact that they didn't end up together in real life.

Based on these photos, I am guessing there was definitely some bizarre stuff going on in the Tanner family household.