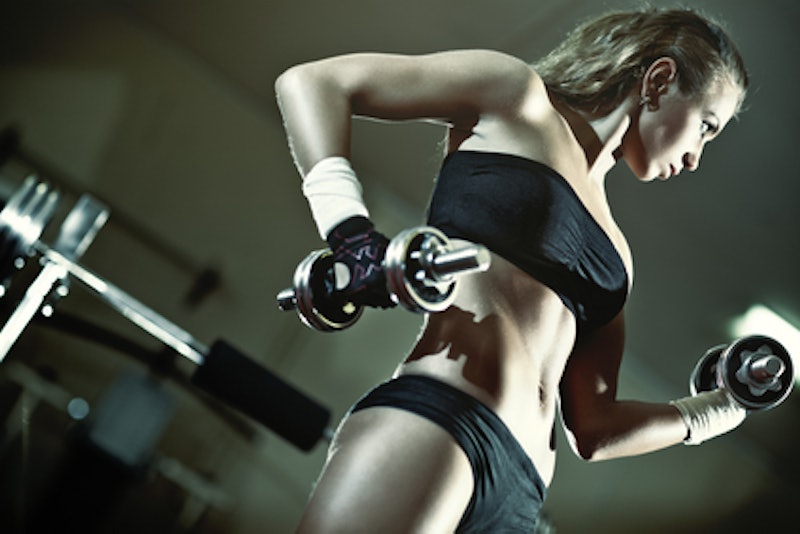 You can find over six million Instagram posts that use the hashtag #GirlsWhoLift. Another two million posts contain the hashtag #StrongNotSkinny. Young women with defined biceps and developed quads flex for these fitness inspiration images. Who would question their envy-inspiring health and wellness? They lift. They look powerful. But a closer scroll reveals a not-so-hidden secret: Many of these Jillian Michaels lookalikes are using weightlifting to recover from eating disorders.

Accounts like Antonio Eriksson’s EatMoveImprove document recovery from anorexia, and countless other Instagram, Tumblr, and Facebook users post similar before-and-after photos. The "before" picture displays women in their most fragile state, while the "after" image celebrates how weightlifting has helped them recover from their eating disorders. But is it really so simple? Or is weightlifting just another incarnation of the disorder? The answer, of course, depends on the person in recovery.

For those battling eating disorders, pumping iron can certainly be an extremely helpful tool, says Maria Rago, Board President of the National Association of Anorexia Nervosa and Associated Disorders. Over time, she adds, she believes that lifting can help improve some young women’s body image: “They can value their body for some of the things it does for them; not just how they look.”

“[Lifting] gave me a way of seeing that my body could be something other than a passive object to be looked at ... something that could be capable and skillful and do things I asked of it, rather than just an object of criticism.”

Northwestern sophomore Emma Wynekoop, 19, agrees. She started lifting after struggling with disordered eating in her senior year of high school. Wynekoop lost 15 pounds through daily excessive cardio workouts beginning at 3:30 a.m., and by trying gluten-free, vegan, and other diet fads. It was a Tumblr picture that propelled Wynekoop into trying lifting. Once she started working out, she says she finally felt like she saw the strong body she'd always desired. Wynekoop gained 10 pounds last year — but her clothing size remained the same, affirming that weight gain doesn't necessarily equal fat acquisition.

Clearly, weightlifting can be a form of masking — or even exacerbating — an eating disorder. After all, you're still trying to potentially change your appearance, shave off fat, and obsessively attend to goals surrounding your body.

Of course, weightlifting is no panacea for an eating disorder. Sometimes, it is a more culturally accepted way of masking a major problem.

“I am still not 100 percent [better],” Wynekoop admits, “but weightlifting gives me goals. I want to keep getting stronger and to keep squatting more.”

The idea of goal-setting — adding another weight to the barbell or another squat to a sequence — is what drove Emily Troscianko, an Oxford University graduate, to the deadlift. She suffered from anorexia for 10 years, and says she was nearing the end of recovery when her boyfriend introduced her to the power of the barbell. Although physically a healthy weight at the time, she says that she was psychologically anything but.

“People tend to treat exercise as a way of punishing themselves,” the 33-year-old Troscianko says, “rather than achieving something positive for their bodies and therefore their minds.” But for her, lifting is different. “[Lifting] gave me a way of seeing that my body could be something other than a passive object to be looked at, something that could be capable and skillful and do things I asked of it, rather than just an object of criticism.”

Of course, weightlifting is no panacea for an eating disorder. Sometimes, it is a more culturally accepted way of masking a major problem. A 2005 study of 607 men and women with anorexia and bulimia in the International Journal of Eating Disorders found that 20 percent of the participants exhibited obsessive-compulsive disorder. It's possible that lifting can heighten OCD tendencies, replacing one addictive behavior with another, according to Chicago-based psychologist Carol O’Connor.

A compulsion to restrict or binge, explains O’Connor, can easily be translated into a compulsion to bench press for five hours straight. People with OCD battle with intrusive thoughts and perform rituals to relieve this anxiety. Instead of restricting or purging food to ease anxiety, lifting could take over that unhealthy role.

“The most important thing,” O'Connor says, “is to refocus on health, not an ideal body, by eating healthily for energy, mood, and overall health.” Adding a knowledgeable trainer or physiologist to the mix could be an “innovative” approach to banishing eating disorders and rediscovering self-worth, Rago adds. At the very least, young women should consult with a trainer before they begin lifting or otherwise working out after recovery.

Obviously, a perfect solution to eliminating an eating disorder does not exist. But the use of a barbell and a bench appears to be a positive new way for some women to combat the lingering, negative self-perception common among those recovering from eating disorders.

Could solid and sturdy quads replace the infamous thigh gap as the new beauty ideal? Could a well-built core replace a desire to see ribs? If these body ideals change, young women’s perceived obligation to look like a Victoria’s Secret model might diminish, and the “fitspo” selfies trickling across social media will trigger a new body ideal. It certainly sounds like a healthier alternative, and perhaps it is. But it is also yet another potentially obsessive beauty standard to be wary of.