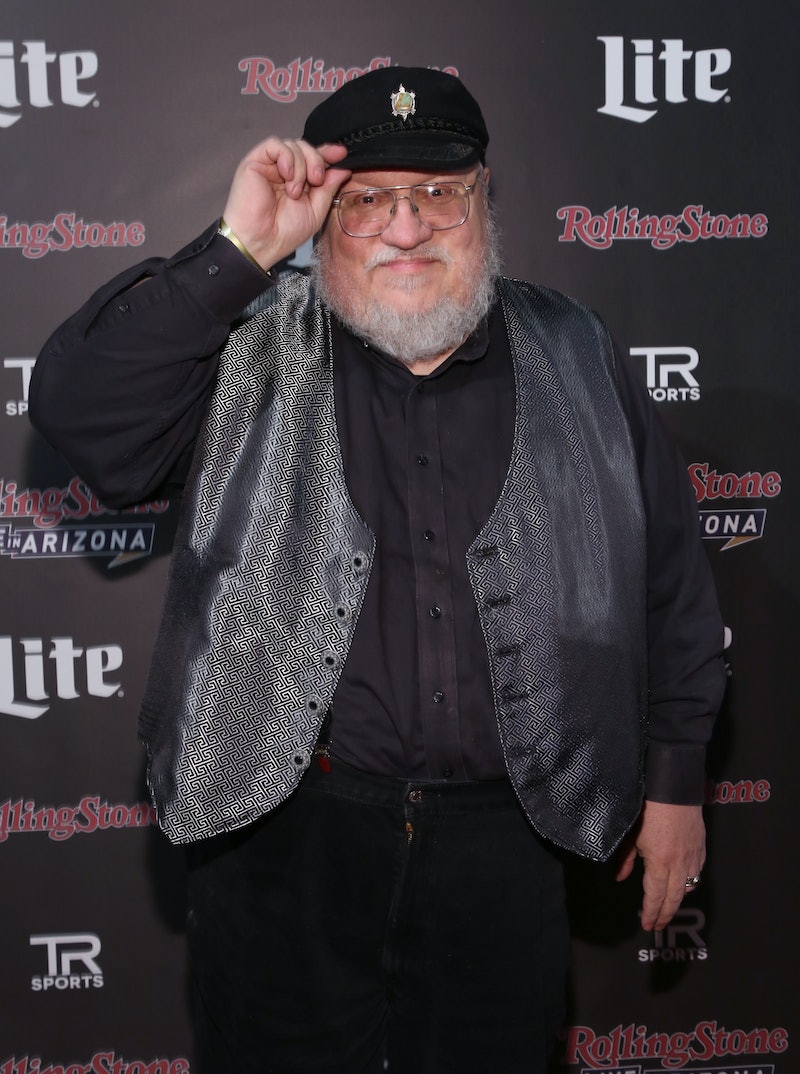 According to a chart from The Washington Post, the highly-anticipated sixth installment in George R.R. Martin's A Song of Ice and Fire saga, The Winds of Winter , might be on schedule, despite multiple delays. Mere days after Martin announced that his new novel would not be available before the Game of Thrones Season 6 premiere, fan news site Winter Is Coming revived the 2014 graph, which shows The Winds of Winter to be on-time. At least when compared to other major fantasy series, such as Harry Potter and The Lord of the Rings, that is.

Fans hoped to have The Winds of Winter by the end of 2015, and, to be fair, Martin did release a book last year; it just wasn't that one. Instead, readers got their hands on a collection of prequel short stories, titled A Knight of the Seven Kingdoms . That was in early October, but it didn't stop ASOIAF fans from hoping that Martin would pull a two-month miracle.

For his part, the author knows he's let a fairly large percentage of the global population down with the latest Winds of Winter delay. From his Livejournal announcement:

Martin's 2015 goalpost was admirable, but The Winds of Winter might not be late at all. Yes, Virginia, even with the push back to a second-quarter-at-the-earliest release. That's because, according to a June 2014 WaPo article, The Winds of Winter should drop at some point in — wait for it — 2017.

I know a 2017 release date sounds unreasonable to ASOIAF fans, who have been waiting for The Winds of Winter ever since they closed the cover on A Dance with Dragons in 2011. Six years for one book?! It's heresy, amirite? From the WaPo piece:

Yes, there have been large waits between the release of book in the series - five years between A Storm of Swords and A Feast for Crows, and another six years for A Dance with Dragons. J.K. Rowling finished all seven books of the Harry Potter series in the time it took Martin to write four books of A Song of Ice and Fire. Stephanie Meyer completed all four books of her sparkle-vampire saga in less than the time it took Martin to write A Dance with Dragons. [sic]

But, you see, none of these other fantasy writers were dealing in books as lengthy as Martin's. J.K. Rowling hit 2,000 total pages of Harry Potter in two years, before a drastic slow-down that stretched the series' last three titles out over seven years. With the release of Harry Potter and the Deathly Hallows, she'd taken nine years to put out approximately 4,500 pages, the same as Martin had done when he published A Feast for Crows in 2005.

In fact, if we're being completely fair, Martin has been more productive than two of the biggest names in fantasy. In four years, C.S. Lewis put out the first five books in his Chronicles of Narnia — just a smidge more than 1,000 pages. Martin used that same timespan to release three ASOIAF books, but those titles clocked in with more than 3,000 total pages. And in the 17 years (!!!) between The Hobbit and The Fellowship of the Ring, J.R.R. Tolkien didn't even manage to hit 1,000 pages, much less the 5,500 or so that Martin had under his belt after 16 years of ASOIAF.

Look, I know you're getting antsy waiting for Martin to release The Winds of Winter. None of us are getting any younger, and I know you're afraid that your beloved killer of fictional characters will bump off before he finishes his saga. But just give him a little longer, yeah? Unless you want a really skinny book, you're going to have a long wait for A Dream of Spring, anyway.